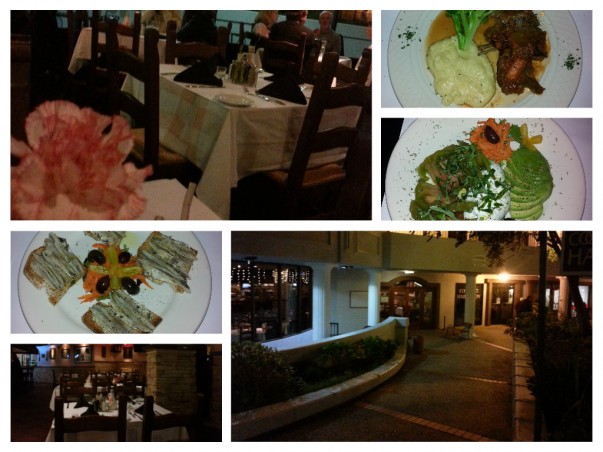 I hate restaurant reviews that breathlessly announce that Restaurant Whatever is a “hidden gem.” Basically, this is a humble brag, demonstrating that the reviewer knows more than you do, is more plugged into the restaurant scene, and is being magnanimous enough to share with you what he’s learned in his exciting, glamorous restaurant life.

Café Mare is a hidden gem in Santa Cruz.

It’s right there, in the middle of town. It’s perhaps the single most obvious restaurant in this whole place. Yet, I’ve gone by it a thousand times without ever really recognizing what it was, and as of this writing, it doesn’t even have an awning. This is a really good Italian place right in the middle of Santa Cruz, and we overlook it. Let’s stop doing that.

It’s at the end of Cooper Street, right on Front. This is the middle of downtown Santa Cruz. It’s right next to the big municipal parking garage on Front Street, so for about three dollars, parking is taken care of.

Kind of off. For some architectural reason, Mare is in a big, Seventies-style round room, with windows. After dark, the windows are decorated with draped LED light strings, which means it looks a little like a disco, which it maybe was. There are some appropriate touches – some framed posters, some stonework, but all in all, it doesn’t look a lot like an Italian restaurant. There isn’t room for a lot of ambience, but there is plenty of room and quiet, which counts for a lot.

This is also definitely not a face place. Other diners included families, a girls’ night out (I heard one of the girls, who was about my age (50) order a gin Martini within one minute of sitting down), and local people catching up in jeans and flannel shirts. Definitely not showy.

Great. The servers have all been there for years, really know their stuff, and have fun with what they’re doing. There’s a lot to be said for experience, and they all obviously were really, intimately familiar with the contents of the menu.

Not cheap – For Santa Cruz, this place is expensive -- $118 for two, including drinks but no dessert.

Appetizers were, for me, an anchovy bruschetta. It couldn’t have been simpler – squares of toast, dressed with anchovies from Monterey Bay, which is about a mile away from the restaurant. The result was fantastic. Simple, rustic, Italian as anything and terrific.

Beth had a tricolor salad, which was equally simple and equally good. Fresh mozzarella, avocado, and tomato, garnished and dressed with olive oil. Again, excellent. There is a place in the world for elaborate, complex appetizers. There is also a place for simple, fresh ingredients, dressed and dished up. Nothing is better than a really good, fresh sliced tomato. Café Mare seems to have figured this out. It was wonderful.

I got verbally seduced by our server, and ended up ordering … roasted goat. It was served with a side of polenta, and a sprig of broccoli, which were fine, but the star of the show was the goat which was fine, but nothing to write home about. As promised, it was really tender, and falling off the bone, but a goat is a relatively small animal, I’m a big guy, and in the end, there wasn’t a lot of it. It tasted very much like pot roast, by the way. At $35 – maybe the goat market is for sellers these days – it was a little steep for what finally arrived.

Beth, the ever-cautious type, ordered lasagna, which was great. I have this theory, supported by zero evidence, that something like lasagna requires zero skill as a chef. What it does require is top-notch ingredients, consistency, and a willingness to improve over time and assemble and bake up the best possible result you can, day after day. Beth’s was exactly that. Rich, savory, fresh, good. The Federal Express of lasagna – reliable, great, and straightforward.

We skipped dessert, but did order coffee, which was terrific. Both of us like really strong coffee, and unlike almost every other restaurant in the universe, this one did not disappoint. It was strong, and smooth, and done right.

To return to my original clichéd theme, Mare is a genuine hidden gem. It’s in a sort of odd room, and although it’s been around for years, it tends to be overlooked in favor of younger, newer, hipper places. But it’s real, and it’s good, and it’s highly recommended. I really enjoyed my meal there. You will, too.