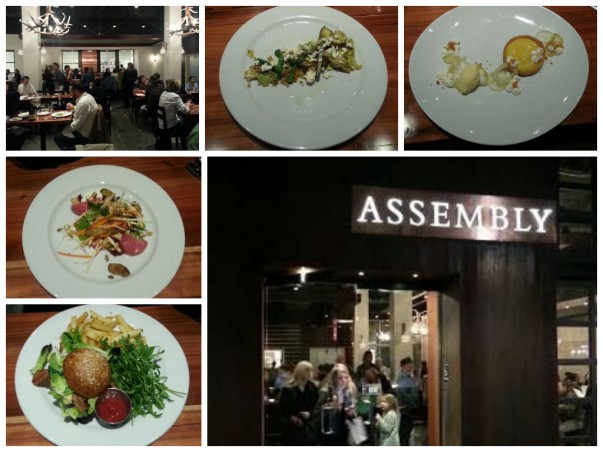 Assembly is the new “it” girl of Santa Cruz restaurants. Located in the former Aqua Bleu, Assembly has been packed since the night it opened. The day we reviewed it, the earliest seating we could get was at 8 PM.

Restaurants in Santa Cruz seem to be divided into basically three categories. The top tier are the true five-star places. So far I’ve encountered only one: Bantam. Remember, by the way, that this ranking is completely subjective, and based on absolutely nothing but my own reaction to the place during one visit. Beneath that are a surprisingly large number of four-star places – really good, but not great. There are a lot of these – Santa Cruz is a real restaurant town. Finally, there’s everything else.

I am going to give Assembly five stars. My conclusion is that it’s one of a handful of the very best restaurants this area has to offer, and neck-and-neck with Bantam for the top spot. Beth agrees. Every single thing that hit the table last night was interesting, expertly prepared, complex and just plain good. This included the usual throwaways like the butter and the coffee. This place is run by people who really know their stuff, and it shows. I have no idea how long they can keep this up, or if Bantam will be as good in a year, but as of right now, it’s one of the very best.

Right on Pacific, in the absolute heart of downtown Santa Cruz. There are several city lots within a few blocks, so although it will take a little looking, there are plenty of places to park.

Interesting. Sort of a combination of Hipster and Industrial Americana. If the Avett Brothers designed a restaurant, it would look sort of like Assembly. Big, heavy wooden tables. A plain concrete floor. Wood on the walls, decorative (and massive) wood beams running the length of the ceiling. Lots of people in hats, plaid shirts buttoned to the neck, beards and ironic Seventies sneakers, t-shirts and hoodies. Everything is extremely tasteful, but the theme is definitely Hipster Chic. I liked it.

Good – wait staff in black tops, khakis and floor-length white aprons running around. Handoffs were professional and pleasant, and everyone was friendly and fast.The founders were also there – Zach Davis, and Kendra Baker, who’s behind the Penny Ice Creamery, The Glass Jar and the Picnic Basket.

Not cheap -- $130 for two, before tip, including two drinks and two desserts. Vegetables, interestingly, are served as an additional side dish, which definitely increases the cost. Oh well.

Really, really, really good. The menu is deceptively simple – only five entrees, plus specials and appetizers. The dishes tend to be beautifully constructed, creative and complex. There’s a lot going on, and the chef clearly is focused on the details.

For starters, even the bread was interesting. The butter incorporated kosher salt, which meant you needed to use far less of it, and it had a fun, satisfying crunch. Hmmmm.

Prior to appetizers, Assembly offers a “snack” menu. We chose the “Meat Snack”, partially just because of the name. I mean, “meat snack.” Sure. I love to get me some meat snack.

What arrived was a nice little selection of cured meats, along with a dab of mustard, homemade toast and pate, everything garnishes with onions. The meats were provided by el Salchichero, a gourmet butcher in Santa Cruz who sources their ingredients from local producers – Dirty Girl Farms, Route 1 Farms, and so on. Assembly is serious about using local ingredients whenever possible, and the result was outstanding. Rustic, rich and earthy without being harsh. A great start, particularly when paired with an IPA beer.

For appetizers, we had salads. And Assembly being assembly, these aren’t run-of-the-mill efforts. They’re very carefully constructed assemblages (get it?) of absolutely top-quality agreements, put together with at least as much attention to how they look as how they taste. They’re beautiful, and complex, and total pleasure to eat.

I had the artichoke and asparagus salad, which was constructed (and I use that word on purpose) with wheat berries, feta cheese, dried fruits, pistachios and kumquats. Absolutely amazing – a really nice array of perfectly balanced flavors and textures, beautifully arranged on a salad plate and dressed with just a little bit of olive oil. The feta was the perfect counterbalance to the fruit and the wheat berries, all set off against the artichoke.

The other salad was built along similar lines, and with a similar effect – beets, carrot and celery root, dressed with cumin, sunflower seeds and sheep’s milk cheese. These are not inexpensive, simple or obvious ingredients, and they’re flawlessly blended together to launch a meal at Assembly stylishly, memorably and creatively.

The entrees were just as good. Beth ordered the “West Coast Burger” – this is a burger in a brioche bun, cheddar, lettuce, pickled onions, “secret sauce” and fries. The burger was incredible – rich, savory, juicy – absolutely perfect. I don’t know how they did it, but it reminded me of a story from Lee Iacocca’s autobiography where Henry Ford is complaining that his personal chef at home can’t make burgers as good as those in the Ford executive dining room. Iacocca, who worked for Ford at the time, went in to talk to the dining room chef, and asked him how he made such wonderful burgers. It turned out that the chef was grinding up steaks to make his hamburger. Assembly has got to be doing something like that. The burger was wonderful.

I ordered the “braised beef”, which is served with roasted turnips, celery root puree, carmelized onion broth, parsley and horseradish. Essentially, this is a beef stew, done with exceptional care and precision and with slightly different ingredients. The pureed celery root made a wonderful base – sort of a substitute for potatoes. The beef was perfect – tender, flavorful, and deep. The vegetables were precisely cut, flawless, and delicious. The entire thing was elegantly presented, which is a neat trick with beef stew, and a really rewarding, savory dinner.

Dessert did not disappoint. One offering was the lime tart, which was made with jasmine meringue, lime confit, white chocolate ice cream and lime gelee. This was prepared in a similar fashion to the salads – ingredients artfully arranged on a plain white plate, resulting in something that was part sculpture, part dessert, and absolutely delicious. And very creative. As an example of this, the meringue was sculpted into small, round bites (the “jasmine” part) rather than simply layered onto the dessert. It was terrific. The sorbet assortment was similar – fresh, clean and fruity sorbets, three simple scoops laid into the middle of a simple white bowl. Outstanding, and a wonderful ending to a terrific meal.

As I said at the very beginning of this review, Assembly is one of the two best restaurants I’ve visited in Santa Cruz. It’s possible to debate the details, but the bottom line is that this is very serious, very high-quality cooking, and it’s among the best I’ve had. If you’re looking for a special meal, or planning a big night out, Assembly should be at the top of your list. It will be on mine.

« Monumental Axis - is it really the widest road in the world? Melbourne Docklands — Sea Facing spectacle »
One Comment