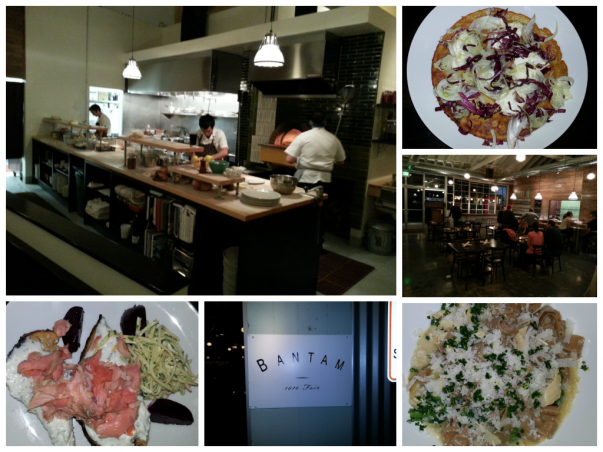 They always mess up the coffee.

Every restaurant I have ever eaten in, that I can remember, always serves mediocre coffee at the end of the meal. It’s either watery, stewed, or has that slightly metallic aftertaste you remember from college, when they made the stuff in ten-gallon urns.

At Bantam, the coffee was perfect. Each cup was made individually. They used coffee from Verve, the best roasting house in Santa Cruz. It was served in individual carafes, with plenty of coffee, should you want a second or a third cup. And it tasted incredible. This pretty much symbolizes Bantam. This small, unprepossessing place, provided the best meal I’ve had in Santa Cruz, and one of the top ten in my life. It was simply flawless. If you have to have one meal in this town, have it here.

Santa Cruz is a town with a really split personality. The negatives are an enormous amount of crime, a huge homeless problem, a lot of drugs and a sort of ongoing culture of dopey, self-satisfied surfer dumbness. If you live here, as I do, it can get really, really trying. You get very sick of driving down the street and having to worry about fools in trucker hats on beach bicycles suddenly riding right in front of you, with no interest in whether they live or die, apparently.

And yet, the positives redeem this place. There’s a respect for creativity, a kind of casual openness and tolerance, and an incredible number of people quietly doing fantastic, creative work without making a big deal of it. Bantam is like that. This is real, no-kidding, world-class gourmet food, but it’s served in a setting and by a staff that’s simultaneously low-key and unbelievably talented.

Where we sat, I could easily see into the big, open kitchen, which is part of the restaurant. There were a lot of people working there, and although it was a slow night, still, there was no sense of pressure, of haste, of anything but calm. And what they turned out was one of the ten best meals of my life.

Bantam is on Santa Cruz’s west side, in a building that used to be, we were told, a gym, and before that, a light bulb factory. It also houses, among other things, an art gallery, the local Buddhist meditation center, and a tattoo place. There’s a parking lot, so parking is easy.

Casual, but really nice. A big open room with high, white-painted wooden ceilings, and the rear of the room occupied by the kitchen.

Fantastic. In keeping with the low-keyness of the places, nobody made a big show of anything. One of the things servers do sometimes that drives me straight up the wall is deliver a big, expansive and sometimes scripted introduction to the restaurant and the specials. Our server was having none of that. He simply told us what the specials were, and was expert, present, pleasant and so on without being in our face. Just great.

Again, wonderful. The room is simple – a concrete floor, a high, arched wooden ceiling, and a kitchen open to the rest of the room. There are nice decorative touches, and lots of windows, but the overall effect was pleasant, charming, peaceful and creative. Simple serving dishes, everything tasteful and good, but definitely not fancy. Just a really nice room, staffed by people who were not kidding about being friendly and expert.

Absolutely amazing. Just incredible. This was the kind of meal where you’d eat something and sort of get this look of dreamy wonder on your face. I kept saying “I cannot figure out how they do this.”

The menu is VERY simple, and is divided into sections. It also changes every single day, depending on what’s available and what, I guess, the chef feels like making. The first section is entitled “Snacks” and contains just that – very small, two-bite dishes that are sort of a warmup for what’s coming.

We chose pork rillettes. These turned out to be sort of a cousin of pate – pork that’s simmered in fat until it is incredibly tender, then cooled with enough of the fat to form a paste. At Bantam, this was then deep-fried, so what you were presented with were two small, deep-fried pork-based bites on a bed of sautéed celery, with some mustard as a condiment. This was absolutely incredible. The rillettes were incredibly rich and savory, and combined with the celery and the mustard, were a fantastic start to the meal.

The actual appetizers were a butter lettuce salad, which was perfectly done, and very small, entire roasted carrots, which were presented in a flawless vinaigrette sauce, with the sweetness of the carrots perfectly set off by the vinegar.

Entrees were first of all, chicken ragu. This was a very simple dish – buckwheat noodles, chicken breast strips, and vegetables – asparagus, spinach, green onions, in some kind of sauce. Really simple – just a handful of ingredients, and the kind of thing you’d make for a family, and for yourself, but just perfectly done. The noodles, in particular, were a miracle. Just the right amount of doneness, and a sauce that was savory, but not too heavy – kind of light, actually.

The other entrée was pizza – this is one of Bantam’s specialties. In this case, it was a chickpea and nepitella pizza, with ricotta cheese and dandelion pesto. The result was a sweet, delicious little pizza, with all the flavors working together perfectly. It tasted almost like candy, and turned out to be something you never expect pizza to accomplish.

The finale was dessert, which was a persimmon bread pudding. Bread pudding is usually a cheap thrill – sweet, gloppy, and heavy. This was the exact opposite – light, really fruity, and wonderful. Paired with the coffee I described, it was the perfect finish to a superlative meal.

I asked a few questions, and learned the Bantam is a husband-and-wife team, with the wife handling the front of the house and the husband cooking. I also learned that the husband has cut his teeth, as it were, at Chez Panisse, and was bringing that experience to bear on Bantam. It shows. Easily the best meal in the area, and a definite jump upward in every aspect. If you have to have one meal in this town, go to Bantam.