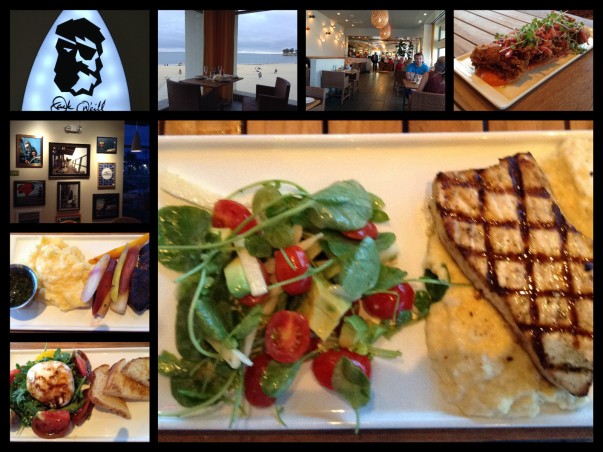 Santa Cruz is an unusual town. It has an amazing, and slightly unreal list of world-class things to do and see – the Boardwalk, Big Basin, Monterey Bay, surfing. But it also has a gritty, discouraging underside – an enormous drug problem, an army of homeless people, and the highest crime rate of any city its size in California. Particularly in summer, it’s a dangerous, and frequently unpleasant place.

Aquarius kind of represents Santa Cruz at its best. It’s a place that very obviously celebrates the beauty and the greatness here, and holds the ugliness at a comfortable distance. It’s the closest thing Santa Cruz has to genuine elegance. As an example, the dining room overlooks Cowell’s Beach and as you sit there sipping your drink you have a lovely panoramic view of a beach with waves breaking, people walking and so on. However, Cowell’s is also known for being one of the dirtiest beaches in California. The water is filthy, and there are frequently mentally ill, drunk and/or homeless people high on meth congregating under the pier. Aquarius doesn’t reveal that.

Interestingly, it also celebrates Jack O’Neill, who is the closest thing to a legend the city has produced, and one of my personal heroes. O’Neill, who has an enormous beard and an eyepatch, and resembles nothing so much as a kindly pirate, invented the wetsuit, which makes cold-water surfing possible. Using that as a launching pad, he then build O’Neill Sports, a very large and very successful sporting goods company, primarily focused on surfing. To get to Aquarius, you have to pass through the Jack O’Neill Lounge, which is decorated with extensive memorabilia celebrating his life and career. It’s wonderful stuff – a big photo of Jack O’Neill at the wheel of a sailboat will always make me feel better.

Aquarius is inside the Dream Inn, right at the foot of Santa Cruz’s Municipal Wharf. Although parking here is a pain in the neck in general, if you’re patronizing the restaurant, you can park in a gated lot across the street. Be sure to get your parking ticket validated – if you do, parking is free.

Tasteful, quiet and minimalistic. The décor is simple – tile floors, a few decorative touches, and enormous, floor-to-ceiling windows with a view of the beach, the Municipal Wharf, the Boardwalk and Monterey Bay. It’s truly spectacular. Wisely, whoever decorated Aquarius seems to have gotten the message that the best thing to do was to let the outside in, and to not attempt to compete with it. It’s lovely, and tranquil, and beautiful.

It sort of matches the décor – simple, elegant, unfussy, and expertly done.

The first appetizer was a Caprese salad. Rather than assembling it from a lot of little segments of mozzarella, this offering has a single, pretty substantial ball of mozzarella dressed, surrounded with tomato and lettuce. It worked well, and looked gorgeous – more organized and simple than your usual Caprese.

The other appetizer was half a dozen baked oysters. I love oysters, and the trick to doing them is the breading. It has to have enough flavor to stand up to the strong taste of oyster without simply being mushy. This was great – flavorful, spicy, substantial, but also a good complement to the oysters. A winner, and absolutely beautifully presented.

For an entrée, I had swordfish. I love this dish – a simple, marinated swordfish steak, served on a bed of polenta, and accompanies by a really simply spinach salad on the side, dressed up with avocado. Rather than getting overly fancy, or attempting to create some kind of dreadful monstrosity of a dish, whoever was in the kitchen was smart enough to let simple, first-class ingredients speak for themselves – the steak was perfectly grilled, and simply presented as is.

Beth had the hanger steak, also perfectly done, and thoughtfully presliced, which avoids the challenge of wrestling with a big piece of meat. This came with vegetables, and a nice hit of mashed potatoes. Mashed potatoes are the classic American counterpoint to steak, and the key to them is to not attempt to make them anything resembling healthy. A LOT of butter, garlic and seasoning, which is what happened here.

Finally, dessert was a fruit cobbler, which we split, along with decaf coffee. My only issue with the cobbler was that it was very small. It was served in a ramekin, which made it easy to eat, however, and beautiful. Maybe if we hadn’t split this dessert I would not have had this tiny little challenge.

Overall, and in conclusion, Aquarius works like crazy because it focuses on simplicity, and lets the important things – the ocean, the quality of the ingredients, and peace and quiet, do their work. Strongly recommended – among the best in Santa Cruz.