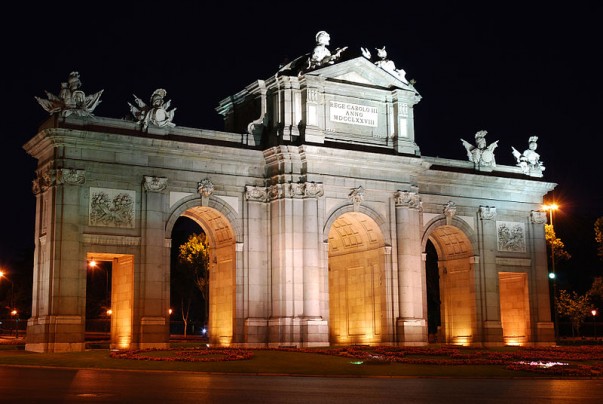 The Alcala Gate in Spain is a fine example of the Neo-Classical architecture. The gate stands on one of the most important roads that leads to northwestern Spain and France.

The fine gate replaced the architecture of the earlier Baroque arch. The gate was built to welcome Margaret of Habsburg, who was the wife of Philip III.  This structure was then built as a triumphal arch on the occasion of the arrival of the monarch.

Alcala Gate, Spain was a part of the large-scale development project. This project had the royal residence of Buen Retiro as its central piece. Other pieces of attractions that were included in the project are the Natural History Museum and Jardin Botanico.

The project was mainly the creation of the three artists, namely, Villanueva, Sabatini, and Ventura Rodriguez. The main attraction of the site are the five passages. While the three passages that lie in the central portion are arch shaped, the other two passages located on the outer part are rectangular.

The gate is built of granite and the beauty of the gate is enhanced by the limestone Baroque decoration. The total height of the Alcala Gate Spain is 19.5 meters. The gate features a number of decorative elements. There are a number of sculptures and capitals in the gate. The relief and the masks that were sculpted in the gate are also worth seeing.

In the 19th century, the Alcala Gate, Spain was shifted to its present site at Plaza de la Independencia. The structure which is popularly known as the Puerta de Alcala is worth seeing.