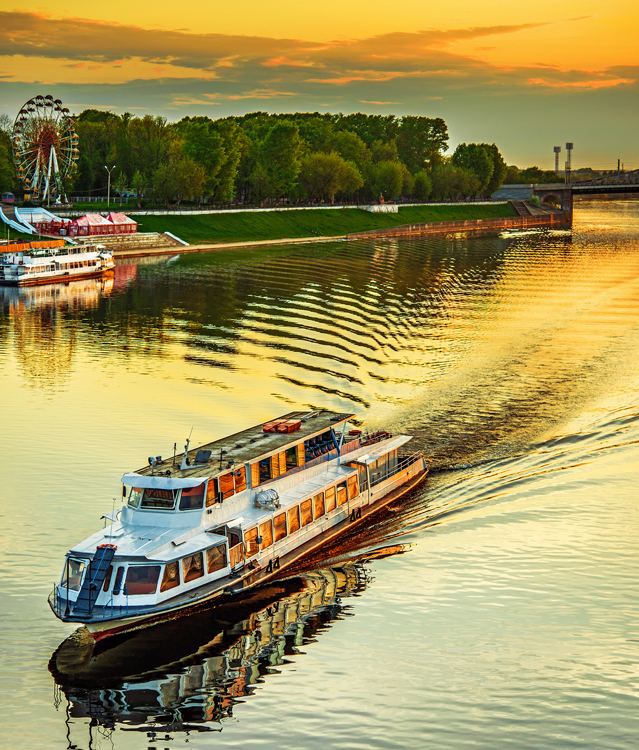 The majestic Volga River, flowing in the western part of Russia, is globally renowned for its length (3,685 km; longest in Europe), and width, which makes it look almost endless at certain embankments. Commercially important, the people living on either side in its entire length consider it more than just a trade and transport route. The river is sacred and referred to as Volga Matushka(Matushka means Mother in Russian). It has played a significant role in shaping the history, culture, and lifestyle of the European Russians.

Located entirely in Russia (European part), the Volga River has seen the creation of some of the largest and most important cities on its banks. Both banks of the river are dotted with the cities and their magnificent monuments and historical sites. These cities include Samara, Volgograd, Yaroslavl, Uglich, Nizhny Novgorod, Kazan, and of course the capital city Moscow.

The Volga River has its beginnings in the glacial Valdai Hills (225 meters above sea level), which is located near Moscow in the northwest. The river initially flows east passing by Moscow, Yaroslavl (a UNESCO World Heritage Site) and Nizhny Novgorod (birthplace of one of the greatest Russian writers, Maxim Gorky). The river then turns south near Kazan, which is home to the famous Kazan Kremlin, another World Heritage Site. Its southwards journey ends in the Caspian Sea by creating a big delta near Astrakhan (famous for its sturgeon and caviar trade), the river flows through cities like Samara (one of the best places to enjoy the width of the river) and Volgograd (the historical city where the bloody Battle of Stalingrad occurred). The Volga is fed by a number of tributaries along its way, notable ones include rivers Oka, Sura, Kama and Vetluga. At present, the Volga River is flecked with a number of hydroelectric dams, canals and reservoirs. Most of the length of the river is navigable as well.

The importance of the Volga River dates back to the ancient times when the river basin saw the development of the Proto-Indo-European civilization. During the 1st century AD, the river was used for trade and transport by the Slavics, the Bulgars and the Khazars who settled in different parts of the Volga basin. There was a rise in trade with Central Asia during this time. Russian states were formed and there was an increase in agriculture of wheat and other crops along the river basin. Throughout its history, the Volga River was referred to by different names like Ra, Itil, Atil, Ethel, and Idil.

During the 13th century, the southern part of the Volga River, below Nizhny Novgorod, saw the invasion of Mongols, whose influence is evident in cities like Astrakhan and Kazan. Along with the establishment of cities, dams and reservoirs, the river also witnessed a number of conflicts. It was used to field warships during the Russian Civil War. During World War II, Hitler considered the Volga River to have special significance for his war against the Allies. He had meant to block Volga routes and capture the petroleum resources near the Caspian Sea to weaken the Russian army and strengthen the Axis forces. But the decisive Battle of Stalingard (1942-43) did the reverse. The Russians showed immense resistance and after over five months of one of the bloodiest battles in history, the German Army surrendered.

This city in the Volga basin is one of the most fascinating places to visit near the Volga River. Founded in the 11th century, Yaroslavl features a large number of architecturally impressive cathedrals and churches.

The Volga River holds a significant place in Russian culture. One of the oldest mentions of the river was by the Greco-Roman geographer and writer Ptolemy, who referred to it as Ra River in his book Geography. The Song of the Volga Boatmen is a traditional Russian song that has been performed by a number of musicians from around the world.