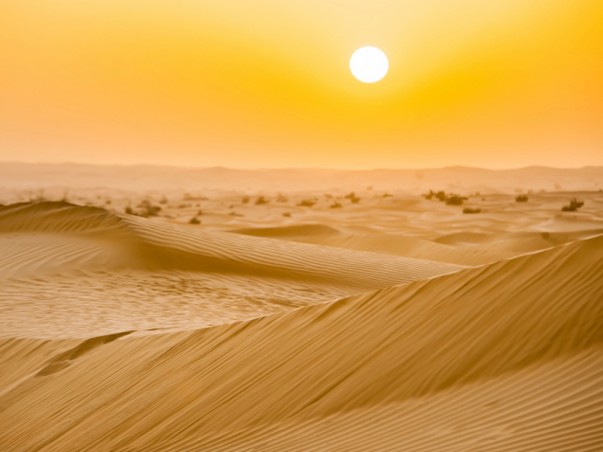 Stretched across the entire northern part of Africa, the Sahara Desert is recognized for its vastness, making it the largest hot desert in the planet. It features a mix of sandy and rocky terrain with sand dunes and scorching bare rocks, dotted with oases near water areas. Literally meaning the ‘Great Desert’, the 3.6 million square miles of Sahara experience extreme weather conditions with very little rain each year (3 to 4 inches). The temperature exceeds 50°C in the summer season, whereas some areas of Algeria get snowfall in the winter season. Alzaziyah in Libya is considered one of the hottest places on our planet (58°C).

Best known for its distinctive flora and fauna, and large stretches of golden sand, the Sahara receives a large number of global tourists each year. They can ride on the famous Dromedary camels, experience the nomadic culture of the Sahara dwellers, and visit the historically famous cities in the desert, like Cairo (Egypt), Timbuktu (Mali), Tripoli (Libya) and Nouakchott (Mauritiana).

The gigantic Sahara Desert covers a number of North African countries, which include Mauritiana, Western Sahara and Morocco on its west, Algeria, Tunisia and Libya on its north, Mali, Niger and Chad on its south, and Egypt and Sudan on its east. People have inhabited these countries since 6000 BC. At present, they are about 4 million people living nomadically, and in cities and towns surrounding the life-giving oases. Each Saharan city or town has a rich history, like that of the pharoahs of Egypt who built pyramids in the eastern arid Saharan plateaus, and the Islamic rulers who built impressive mosques and buildings in various desert countries.

The Sahara Desert is a much-studied area for archaeologists, historians and geologists. Over the years, scientists have found dinosaur fossils, and petroglyphs dating back millions of years. These indicate that there was a time when the Sahara was verdant with river valleys, lush mountains, and deep forests. Experts believe that increased desertification and rising of the earth's temperature by 1600 BC turned the area into a desert that we see today.

Apart from the sand dunes, you can find a rocky terrain, known as hamada in many parts of the Sahara. There are a number of mountains as well here, like Tibesti in southern Libya and northern Chad that has beautiful oases and a rich biodiversity, and Hoggar in southern Algeria, which lies along the Tropic of Cancer and is home to the endangered Painted Hunting Dog. If you are near Aïr Mountains in northern Niger, you can see a variety of rock art that dates between 6000 BC and 1000 AD!

Walking across the desert can be an exciting experience, but you need to be aware of the kind of creatures lurking around. It is best not to pick up anything moving on the desert, especially if it’s an almost 4-inch-long scorpion. These are better known as Deathstalkers, as their venom has potent neurotoxins like scyllatoxin and agitoxin. These, although not lethal, can cause major life-threatening reactions in the body. If you do get stung, it is a good idea to run to a nearby hospital to get an anti-venom shot. A Deathstalker sting is considered a medical emergency.

Another insect, the scarab beetle (Scarabaeus sacer) is considered sacred among Egyptians since ancient times, owing to its ‘magical’ emergence from dung. You can find it carved on a wall in one of the temples in Karnak in Egypt, symbolizing the sun god Ra’s early morning form.

If you are a Star Wars fan, you will love to see the town where Anakin Skywalker grew up. You can head to southern Tunisia, near the city of Tozeur, to visit Mos Espa (the town depicted in the planet Tatooine in the Star Wars series by George Lucas) located amidst the sand dunes.

Read our guide to Sahara Desert