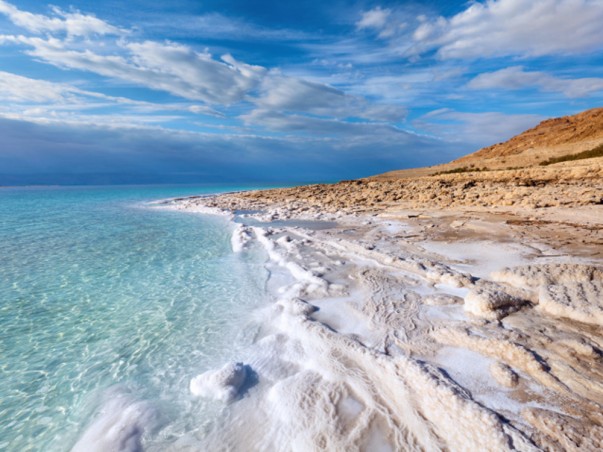 Dead Sea's water is believed to have therapeutic properties

The Dead Sea is one of the most fascinating water bodies on earth. It is famous for its ‘extra’ salty water, so much so that people float rather than sink due to its high density (higher than that of the human body!). Owing to its hypersalinity, the sea does not have any fish or other macroscopic water animals. It is no wonder that early visitors named this lake the ‘Sea of Death’. In addition to its ‘briny’ nature, the Dead Sea has another unique recognition – it sits 417 meters below the mean sea level! This fact makes it the lowest place on the surface of the earth (not counting the ocean surface here).

The Dead Sea is a sought-after tourist destination owing to its water’s therapeutic properties. There are numerous resorts and spas on its coast. The brine allows the adjoining countries to extract potash, a prominent agricultural fertilizer.

Located in the Jordan Rift Valley in West Asia, the Dead Sea is fed by the River Jordan and other small streams. It also acts as a border between Jordan to the east and the countries of Israel and the West Bank to the west. A famous geological feature here is the Al-Lisan Peninsula, which is situated on the southern end of the lake. Lisan in Arabic means ‘tongue’! It is considered as one of the most salty parts of the Sea. 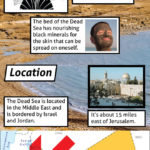 The water, though, does not leave the lake by flowing out. Due to the high temperature and dry climate, the Dead Sea experiences high levels of evaporation round the year, keeping the water level from overflowing. The high evaporation is also a reason of the heavy salinity of the lake.

The 33.7% saltiness is therapeutic in many ways. It is believed taking a dip in the waters can be quite effective in soothing diseases like diabetes, rheumatism, psoriasis, etc. Moreover, the minerals found in and around the lake are considered to be present in the human body naturally, making it easy for the body to absorb its therapeutic goodness effectively. It is better not to swallow the salt water though,as it is known to cause choking due to inflation of the larynx.

How Salty is the Dead Sea?

If you have tasted the Dead Sea waters, you know – it does not taste salty at all! It in fact it tastes bitter. Scientists believe that the 340 grams of salt per liter of water can make the solution so salty that the sensation confuses the mind to think that it’s bitter.

Dead Sea is not Dead (Really!)

The popular notion that there is no life growing in the Dead Sea is not completely true. Scientists have found craters at the bottom of the lake from which freshwater emerges. This makes the Dead Sea’s salinity fluctuate with time. In fact, this caused parts of the sea to turn red due to red algae growth (which are known to resist the salt-content fluctuation) in 1980 and 1992. At present, you can find clusters of bacteria, algae or fungi in some parts of the lake.

When you visit the Dead Sea, know this – it has been there for almost three million years. It is believed that the lake was first spotted by Herod the Great (73 to 4 BC), the Roman King of Judea well known for his architectural achievements. Cleopatra is also believed to have promoted the goodness of the Dead Sea water. Another section of believers state Biblical references, where, although not prominently mentioned, the Dead Sea was a significant barricade for the Ammonites and Moabites' army when they went out to fight with Jehoshaphat (873 to 849 BC), then ruler of Judah. For centuries, the Dead Sea has been mentioned in various writings, like those by Aristotle; it has also been used by the Egyptians for mummifying their pharaohsdue to its saline soil and asphalt.

Know more about the location and get travel information about the salt lake, visit the Dead Sea