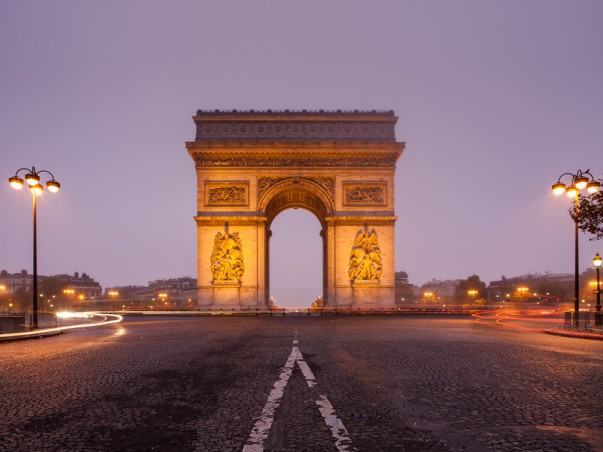 A giant arch in the heart of the most romantic city in the world, the Arc de Triomphe is a 164-feet tall stone monument on the western edge of the Champs Elysees Avenue in Paris. It is best known for its imposing size, detailed relief sculptures, and patriotic theme. Built between 1806 and 1836 (which makes it older than the Eiffel Tower, built in 1889), the Arc celebrates French war victories and honors soldiers and high ranking military officials who were responsible for France's military triumphs.

The Arc de Triomphe monument is easily accessible from any part of Paris, owing to its central location in the hub of the Place Charles de Gaulle area and at the center of the city’s main, from which roads connect to all directions of city.

A symbol of pride and patriotism, the Arc de Triomphe was a project assigned by the then Emperor Napoleon in 1806 to architect Jean Chalgrin, with a design inspired by the 1st century monument, Arch of Titus in Rome. This monument was to honor Napoleon’s Grande Armee, who had been successful in their military feats, the most recent being the Battle of Austerlitz (1805). The Arc took 30 years to complete, due to several problems, including the death of Chalgrin, Napoleon’s defeat in the Battle of Waterloo, and the Bourbon Restoration. The structure saw its way to completion when King Louis Phillipe I took up the project and commissioned Guillaume Abel Blouet to build the rest of the monument (1833-1836). He dedicated the monument to all French revolutionaries to date.

The Arc when finally built had an imposing look, with ornate borders, rectangular framed bass reliefs depicting battle scenes, four prominent relief sculptures on the arch pillars, and inscribed names of French victorious soldiers in the archway. The most famous relief in the Arc de Triomphe is the one sculpted by Francois Rude, named ‘La Marseillaise’ that shows the French people fighting against foreigners, thus rousing Bellona, the Roman goddess of war.

When visiting the Arc you can pay homage to the ‘Tomb of the Unknown Soldier’, and watch the Memorial Flame being lit every evening at 6:30 PM, to honor the soldiers who died in action.

Bastille Day on 14th July brings the Arc de Triomphe alive. On this day you can see military processions, airplanes flying over the Arc spewing the French flag colors in the air, and the Arc's archway festooned with a large National Flag.

Paris is home to a number of attractions like the Eiffel Tower, Louvre etc. When you climb the 46 steps up to the Arc de Triomphe and glance at the horizon, you can get a glimpse of many of the city’s tourist attractions. In fact, eight of these landmarks are located on an axis running across Avenue de Champs Elysees and extending to La Defense. These landmarks include Place de la Concorde, Palace of Tuileries, Arc de Triomphe du Carrousel (sister archway to the Arc), and the Louvre at one end.

Although an inspired creation, the Arc de Triomphe has been instrumental in inspiring architect Edwin Luytens to design the India Gate in New Delhi, India. Similar to the Arc, India Gate has an ever-burning flame that commemorates the ‘immortal soldier’, and a tomb that represents the ‘unknown soldier’.