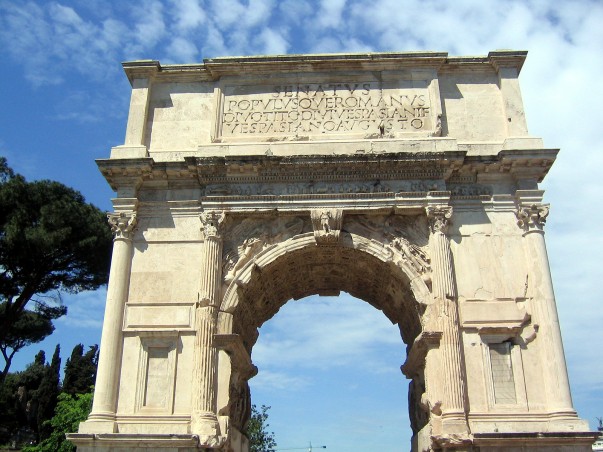 The Arch of Titus is a marvelous arch-shaped monument located in Rome. Standing for over 1,900 years (with some restoration and preservation from time to time), it reminds us of the Roman architectural expertise in the era. It is situated near the Roman Forum on the city’s main street, Via Sacra, which literally means the Sacred Road. On a tour to Rome, visiting the Arch of Titus is considered as important as touring the Colosseum, the Pantheon, and the Pyramid of Cestius. In fact, the Arch is dedicated to the ruler who built the rest of the Colosseum after his father Vespasian (the initiator of the Colosseum’s construction) died.

Perched at the base of the Palatine Hill, the Arch of Titus is one of those Roman architectural creations that have inspired other monuments in the world. Notable among these are the Arc de Triomphe in Paris, the India Gate in Delhi, the arch at the northern edge of the Washington Square Park in New York, and the portico of the Basilica of Sant’Andrea in Mantua.

Interesting Facts about Arch of Titus

The Arch of Titus was built to commemorate the end of the Jewish wars and conquest of Judaea in 70-71 AD. This honorific arch is dedicated to the Emperor Titus and his father Vespasian, who were instrumental in crushing the Jewish army and destroying Jerusalem. This triumphal monument was built after the ruler’s death in 81 AD by his brother and successor to the Roman throne, Domitian. The Arch of Titus, today, not only is reminiscent of victory in war and the destruction of the Jewish home-country, it also marks a life-changing event in history, that of the beginning of the spread of Jews into Europe. This started the formation of the Jewish Diaspora in the continent.

The construction of the Arch of Titus is believed to have been undertaken by the emperor-backed architect, Rabirus. The entire 51-feet-tall structure is made of Pentelic marble, which is a shiny stone found in the Penteliko Mountains in Greece. Interesting characteristics of the Arch include stone carved reliefs, capitalized writings on the top panel, and attached Corinthian columns on each side of the fornix (i.e. arch).

Carved Reliefs of Arch of Titus

Unlike the Arc de Triomphe, you cannot find much carving from a distance while visiting the Arch of Titus. Go into the passageway and look around. You can now see the carved reliefs, including the detailed coffered underside ceiling (also known as soffit), reminding you (somewhat distantly) of the Pantheon dome ceiling. One of the reliefs on the inside wall of the arch depicts a procession of Emperor Titus returning home with riches seized from the ancient Second Temple of Jerusalem. The treasures shown here include trumpets and a menorah, which is a seven-branched candle holder or candelabrum considered sacred by the Jews. There is another relief in the arch that symbolizes the deification of Titus. He is shown being carried to heaven on eagle’s wings.

The first thing you notice apart from the arch-shaped off-white structure from afar is a set of inscriptions in capital letters on both sides of the top panel of the arch. Written in Latin, the inscription on the east of the arch can be translated to mean that “The Roman Senate and People (dedicate this) structure to divine Titus Vespasianus Augustus, the son of the divine Vespasian.” Originally the writing was gilded with bronze. This was stripped away years later by unknown people.

The inscription on the opposite (west) panel was written later during the restoration of the structure in 1821. It is a longer text as compared to the one on the east. It means that Pope Pius VII restored this remarkable monument that has both artistic and religious significance in history.