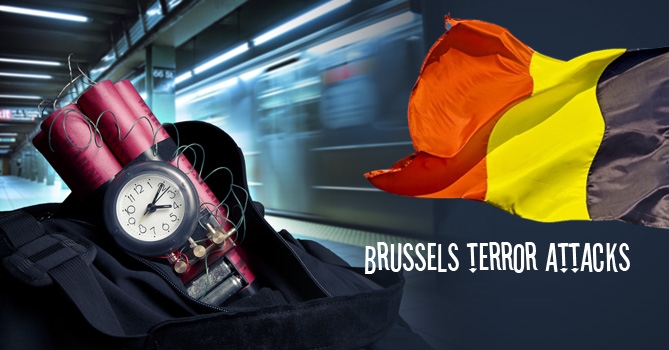 “Hope must survive”, tweeted Belgium’s more than five-century old Catholic University of Leuven a day after ISIS suicide bombers attacked Brussels’ international airport and a city metro station on March 22. More than 30 people were killed and over 100 others injured in this terror assault, which occurred exactly 130 days after ghastly suicide bombings in Paris leading to the death of 129 people in November 2015. Brussels, the national capital of Belgium, is the headquarters of 28-member of North Atlantic Treaty Organization and seat of power of the European Union. The city symbolizes strength, hope, and culture. By carrying out attacks in the city, the terrorists showed that they would bombard such symbols without encountering any challenge. They did it earlier in France and now in Brussels. Investigation carried out by Belgium police so far suggests that those responsible for attacks on the Brussels’ airport and the city metro station had a similar background and training that attackers of Paris had. And all of them came from Molenbeek, a municipal area of the Belgian capital, where nearly 40 per cent of the population is Muslim.

As per an estimate, a significant proportion of jihadis joining ISIS from across Europe belong to Molenbeek, which was once a textile industry hub. Khalid and Ibrahim el-Bakraoui, the two of the suicide bombers who carried out attacks in Brussels, lived in Molenbeek. They got radicalized and found sense of urgency and purpose in jihadism when they were in prison in Brussels. According to a French daily Le Monde, Khalid was sentenced to a five-year prison term in 2011 for armed robbery and car theft, while Ibrahim was given a nine-year prison sentence for opening fire on policemen using a Kalashnikov during a burglary in 2010. It is not clear when the two brothers were released from jail. Yet the incident has exposed the inefficiency of the Belgian security system. Turkish President Recep Tayyib Erdogan, whose administration has come under flak from the opposition for its inability to stop the spate of terror-related incidents in the country, told reporters in Ankara after Brussels’ terror attacks that Belgian authorities were warned of Ibrahim’s terrorist link while deporting him to the Netherlands in 2015.

Despite this, Belgian authorities took no step against him, indicating their casual attitude towards the perpetrator of menace who has torn asunder people emotionally and psychologically. Mastermind of the Paris attack Salah Abdeslam, who was arrested by the police from Molenbeek on March 18, was a childhood friend of Khalid and Ibrahim el-Bakraoui–both of whom perished in the suicide bombing in Brussels. Some analysts say the Brussels attack was a retaliatory act undertaken by ISIS against Salah Abdeslam’s arrest. Abdeslam was considered as the key ISIS point man, who used to drive hundreds of new recruits from Europe into the terrorist outfit’s fold every year. A few days before Abdeslam’s arrest, his friend and co-conspirator of the Paris attack, Mohamed Belkaid was shot dead by police in Brussels. Experts say that if Brussels attacks were indeed an act of revenge then it is a cause of great concern that terrorists have spread their networks across Europe and there they can respond to their targets quickly and devastatingly.

But so far the statement issued by ISIS suggests no linkage of the Belgium attacks with that of Abdeslam’s arrest, rather it clearly stated that Belgium was targeted for its participation “in the international coalition against the Islamic State.” However, since June 2015, Belgium has not carried out air strikes against ISIS targets in Syria. It carried out only limited strikes and that too were confined to Iraq. Whatever be the reason of the attack, the incident has a potential to further damage Syrian, Iraqi or North African migrants’ bid to cross over to Europe for asylum. In fact, screw had already been tightened in the wake of the Paris attack when several European countries had refused to accept West Asian migrants on their land. As such, when terrorist attacks took place in Brussels, several European television channels and newspapers were seen full of debates and commentaries over the migrants’ issue. Politicians cutting across party and ideological lines and common European citizens alike were concerned that ISIS and other terrorist groups were slipping radicalized youth in the guise of migrants into an unprepared Europe.

Meanwhile, there is a rumor that a deal signed recently by German Chancellor Angela Merkel and Turkish President Erdogan over the migrants issue may be put on hold in the wake of terrorist attacks in Brussels. The deal envisages Ankara taking back all migrants who cross to Greece illegally by sea routes. In return, the European Union will lift thousands of Syrian refugees directly from Turkey and also reward it with early visa-free travel, money and EU membership. The deal, already under huge public scrutiny, is seen as a security threat to Europe. Experts have also questioned the deal on humanitarian and legal grounds. The Brussels incident has given these experts a further reason to argue against the controversial deal. But more than this, a pressing concern before the world is how to contain ISIS and its nefarious designs which have taken a toll on several innocent lives? It is said that until terrorism continues to be defined in terms of bad and good terrorism and until no concerted action is taken against it, there will be no riddance from the menace.