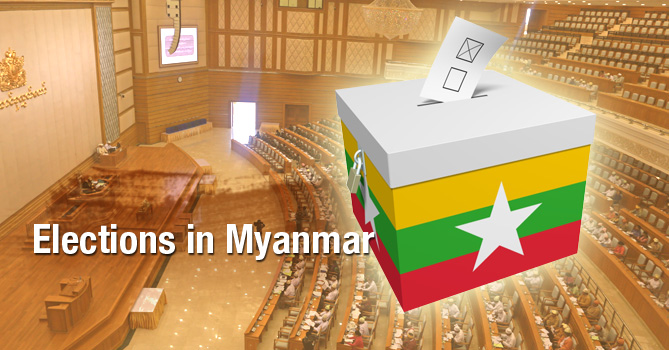 Myanmar is on way to conduct general elections on November 8. Since unveiling of the new Constitution there in 2008, this would be the second general election in the country which remained for more than four decades under the Junta rule after its independence from Britain in 1948. The forthcoming election would test the strength of democracy. Through it the country’s political, economic and social direction would also come under close public scrutiny. Thereby, the upcoming polls are very important for the South Asian country and the world as opposition leader Aung San Suu Kyi, regarded as a ‘champion of democracy’, is also contesting the election for the first time in the last 25 years.

In 1990, under the Junta ruling, her party, the National League for Democracy (NLD), had won the election. She was to be sworn as the Prime Minister of the country. But the Junta, which had put her under house arrest in 1989, could not end her detention for political reasons. Rather, she continued to languish under house arrest only to be set free in November 2010 when the civilian government headed by Thein Sein was formed. Establishment of the Thein Sein government, even though it was being backed by military commanders, marked several reforms at the political level.

Hundreds of political prisoners were freed, peace deals took place between the government and minority groups and censorship on the media was lifted. Given this, the upcoming general election has generated enough expectations among people. They feel that it would further push reforms, especially political ones which Myanmar’s much admired opposition leader Suu Kyi has claimed, have stalled since the past two years. However, for now, everyone wants free and fair election and smooth transition towards the next civilian administration. But Suu Kyi who wanted to run for the country’s presidency, instead of parliamentary seats for her party NLD, considers smooth and peaceful transition more important than free and fair polls in the country. “A smooth and tranquil transition is almost more important than a free and fair election,” the 1991 Nobel peace prize winner recently posted on her Facebook page. Like her, many others too wish that military does not intervene and put a halt to the growth of the nascent democracy in Myanmar once the outcome of the election favors Suu Kyi-led NLD. Whether it happens or not, the country’s new Constitution is military dominated which bars Suu Kyi from standing as president because she is married to a foreigner. Then under the present Constitution, 25 per cent of parliamentary seats have to be reserved for the military which is also guaranteed to get three cabinet positions: justice, interior and defense.

In the face of all this, a recent development in the ruling Union Solidarity and Development Party (USDP) only led to confirmation of view that political system is not immune to military intervention. Chairman of the USDP Shwe Mann who was also speaker of parliament was ousted from the USDP because he was perceived to be too close to Suu Kyi. All this stacks against healthy growth of democracy. However, Myanmar’s powerful commander-in-chief Min Aung Hlaing has reiterated that the military will respect the outcome of the forthcoming general election. He went to the extent of saying that the result would be respected by everyone even if Suu Kyi’s NLD won a majority.

Given such development, the next month-held general election will be historic. It will represent the end of a political process that began five years ago when the quasi-military government led by Thein Sein dismantled decades of authoritarian rule. The NLD needs 67 per cent of the total 440 parliament seats to secure majority in the parliament. Other scenario is that if the NLD fails to secure majority then the ruling military backed USDP may form the government with support from smaller parties. Thein Sein would be then re-installed as prime minister of the country (from 2007 to 2011, he was Myanmar’s prime minister). Yet there is lot of gap between perception and the reality. Even if Suu Kyi’s party gets majority and forms a government, it would not be easy for her to run the administration free handedly. She will have to suffer restrictions from the Constitution. To do away with them, she will require the support of at least 75 per cent lawmakers to initiate Constitutional amendment. Even after this, it is not sure that military, which has been bestowed with veto power, will not annul the whole process of Constitutional amendment by using its special power. Earlier, efforts to lower the dominance of military in the Constitution have already failed.

But then, it is technical aspect and it is as much challenging as the mess the country is facing on health, education, power and unemployment fronts. Its opening to the world has opened the floodgate of public aspirations. In November 2011, Hillary Clinton became the first US Secretary of State to visit Myanmar in more than 50 years. Just a year later, Barack Obama himself visited the South East Asian country, making him the first sitting American President to do so. Around the same time, the U.S. appointed its first ambassador to Myanmar in 20 years. In 2014, Myanmar hosted the ASEAN summit on its land; in the same year, the country’s President Thein Sein went to China to participate in the Asia Pacific Economic Cooperation’s CEO summit. These developments have failed to yield dividends, largely on social plane. Religious tension between majority Buddhists and minority Rohingyas has taken a toll on lives of people. Some experts see this tension more for resources than the religious chauvinism. Nonetheless, whosoever forms the next government in Myanmar; challenges across the country are spread like porcupine’s spikes. It is difficult to handle them without adopting caution and alertness. A simple mistake by a government, which is not enjoying military’s support, may push the country to chaos and instability.