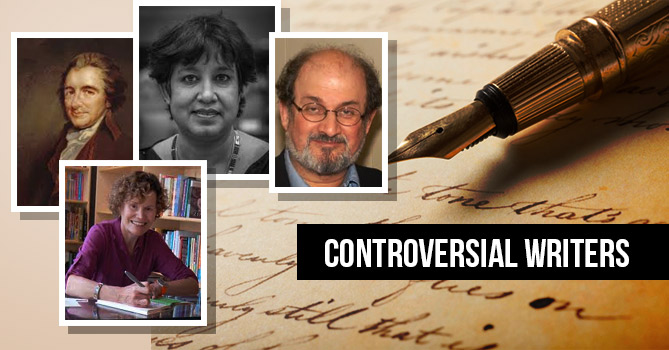 Till date in human history there have been lots of authors who have attracted their fair share of controversy because of the opinions that they have expressed through their works or the way in which they have expressed them. These authors have been ostracized by the very society on which they have based their works for supposedly bringing to life the less-than-palatable aspects of their being. They have been rejected in certain societies while they have been celebrated in others. People have been after their lives and authorities have labeled them as causes of social disruption – a sobriquet none of them perhaps ever wanted.

His is the most prominent name when it comes to controversial writers of the modern era. He attained much prominence when he won the Booker Prize for Midnight’s Children, his second novel. He is an author who specializes in the genre of magic realism, a genre made famous by Gabriel Garcia Marquez. Rushdie became infamous after writing Satanic Verses, which remains his most controversial work till date. This work invited global condemnation by Islamic religious groups as well as other authors for making fun of Islam and its ways. Ayatollah Ruhollah Khomeini, the Supreme Leader of Iran, regarded this novel as blasphemous, and even issued a fatwa against him.

Nasrin started out being a doctor in Bangladesh and soon became an author and poet known for her fiery issues. She has been a highly controversial author who has faced widespread criticism from her peers as well as other intellectuals. Like Rushdie, she has ridiculed principles of Islam as well and made comments that have been deemed outrageous and offensive. From 1994 she has been living outside Bangladesh and at present she is in New Delhi, where she is working for causes related to human rights, equality for women, and freedom of thought.

The claim to fame for Judy Blume is writing one of the most debatable novels centering young adults and children. The main subjects of her novels have been teenagers, and the principal issues have been sexuality, friendship, existence of God, and religion. She has generally dealt with burning issues that can be regarded as strict no-nos for readers of a certain age group. This is also the reason why her works are barred from being available in the U.S. However, that has not stopped her from achieving sales figures in the region of 80 million copies around the world.

Thomas Paine is held as one of the founding fathers of the U.S. It was Paine who brought about a revolution of sorts when he wrote The Age of Reason, a deistic pamphlet that questions Bible’s authority and also criticizes the practices that are a part of institutionalized religion in a harsh manner. He was blacklisted for his efforts by his contemporary intellectuals and even now he is thought to be one of the most controversial writers of all time.

JD Salinger is the author of The Catcher in the Rye, a highly controversial novel, and he too is regarded as one of the most contentious authors of the 20th century. His works have been subjected to a significant amount of public scrutiny and garnered a lot of attention as well. The major characters in his films were social outcasts who looked for happiness by way of symbolism, loneliness, and religion. It is for employing such debatable subjects that Salinger has earned his place in the pantheon of controversial writers.

David Herbert Richards Lawrence was a man of many parts. He was a novelist, a poet, an essayist, and a painter. It was in the literary domain that he faced a significant amount of backlash by way of being persecuted by the authority and a constant and almost never-ending stream of censorship. Through his literary works Lawrence contributed to a lot of discussions regarding issues like religion, sex, and psychology. When he died, Lawrence was widely regarded as a pornographer who had ravaged his own artistic honesty, wealth of talents, and moral righteousness.

Voltaire is one of the principal figures of French Enlightenment. In his time, he attracted a fair bit of controversy because he propagated that people be allowed to choose their own religion and also asked for the State to be separated from the Church. He was a fervent advocate of social reform, something that was not viewed too kindly by the powers-that-be and as a result he was regarded as a controversial personality right from the start of his career as an author.

Freud found the discipline known as psychoanalysis and is highly regarded for his research in the domain of unconscious mind. His ideas on women are still the subject of much debate. Modern day psychology experts have found his theories on women to be lacking in sufficient scientific logic and are derogatory, and as a result these are no longer part of the popular discourse. Freudian theory regards sexual desire as the main source of motivation for humankind. This is the reason his books have been so controversial. However, for a period of 80 to 90 years, he has had significant impact on the Western psyche in general.