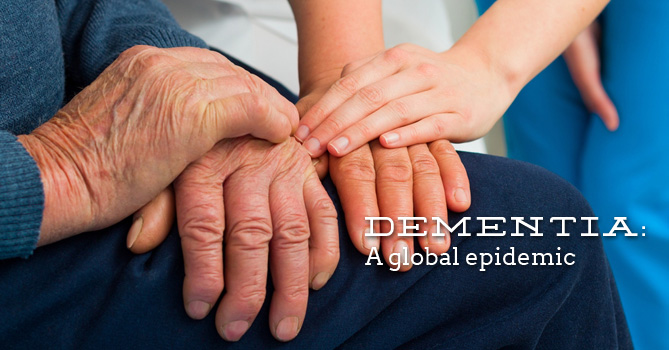 “Dementia is a syndrome in which there is deterioration in memory, thinking, behavior and the ability to perform everyday activities” – World Health Organization

Dementia is not a specific disease. Instead, the term dementia refers to a group of symptoms that cause loss of brain function. People suffering from dementia may suffer from progressive memory loss, loss of language and linguistic skills, impaired judgment and brain fog, and also progressively lose basic life skills such as driving.

Dementia is often triggered by the onset of other diseases such as Alzheimer’s disease. It interferes severely with the victim’s social skills and ability to think and reason. The diagnosis of Dementia is, however, best left to healthcare professionals. Memory loss and brain fog due to aging and/or medication, stress etc. cannot be categorized as Dementia. Dementia is not congenital and is more pronounced in people over 40 years of age.

When to Consult a Doctor?

The symptoms of dementia are difficult to spot early. In the early days, most patients attribute their forgetfulness to absent mindedness. As dementia develops one or more of these symptoms may be spotted.

If you or your friend/family member starts to experience any of these symptoms, contact your local doctor immediately and talk about your concerns.

Dementia is of many different types and is caused by a number of diseases.

Alzheimer’s disease is the most common form of Dementia. About two-third dementia patients suffer from Alzheimer’s. It is degenerative or progressive. Vascular dementia is set off by brain damage due to stroke. The Lewy body dementia is a condition of abnormal protein formations in the brain.

Some other common diseases that cause onset of Dementia are –

Brain injury or even the spread of infections such as HIV/AIDS, Lyme disease, and Syphilis may also cause dementia.

There are a number of diseases or conditions that may cause dementia like symptoms but are reversible when detected early. These include –

News reports from 2015 suggest that Dementia is set to soon become a global epidemic. According to the popular non-profit organization, Alzheimer Disease International, as of 2015, about 46.8 million people worldwide are living with dementia. This figure is likely to double each year and by 2030 about 74.7 million people across the world will suffer from dementia. By 2050, this number is likely to reach 131.5 million.

If the figures alone do not sound warning bells, consider this. Currently, most of the dementia cases are reported in the developed western nations. This is now set to change as well. By 2050, the aging population of China, India, and other South East Asian and African nations are likely to suffer from the disease. These countries have almost no research going on and awareness about dementia is very low. The governments are unprepared to deal with the Dementia epidemic that is likely to hit these countries.

Economically backward countries will suffer the most. Even in 2015, the total cost incurred by countries worldwide due to dementia amounts to about USD 818 billion – approximately 1.09 percent of the world’s GDP. By 2030, estimates are that the world will be spending about USD 2 trillion on managing dementia.

Dementia has become such a global concern that in December 2013, world leaders from the G8 countries met at a health summit dedicated to Dementia. The summit emphasized the need for a coordinated global plan to manage the disease and for increasing government funding for research of a remedy or a cure. The G8 leaders signed a joint declaration agreeing to fight back.

The majority of the cases of dementia are irreversible. Treatment, thus, begins with treating the causes or the diseases that brought on the dementia. Alzheimer’s is incurable currently but an early diagnosis allows for medical intervention slowing down its onset considerably. They also temporarily improve cognition and functioning of the person. Psychotic symptoms are treated with antipsychotic drugs.

A great deal of research and clinical trials are undertaken across the world with the intention of finding a cure or a remedy for dementia. Clinical trials of new medicines and drugs are also ongoing. In most countries volunteers are free to sign up for such trials.

Celebrities Who Suffered From Dementia

How Can I Help?

Death by Dementia (Alzheimer’s) per 100,000 Population