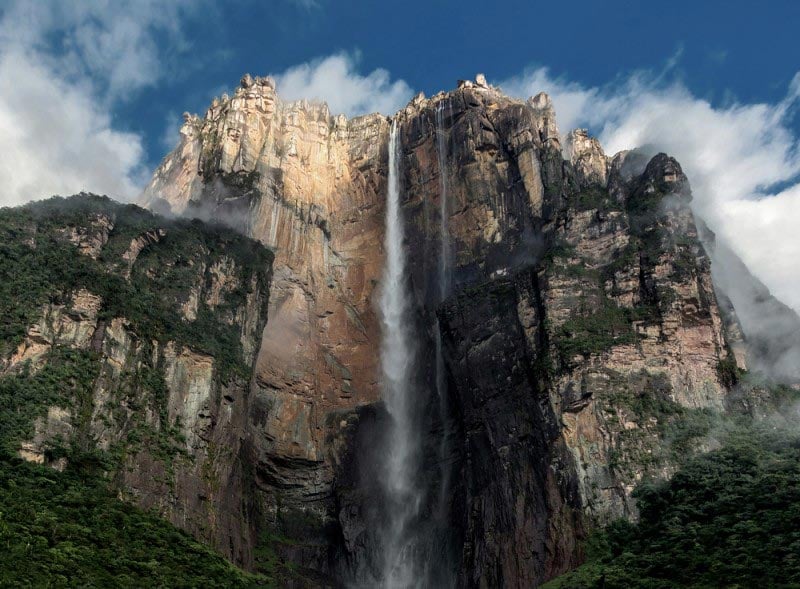 Referred as “Waterfall of the Deepest Place”, the Angel Falls evoke a sense of tranquility.

Aptly referred as “Waterfall of the Deepest Place” by the Pemon people, the Angel Falls evoke a sense of tranquility. And yet, at the same time, thundering sound of the water dropping nearly a kilometer deep from the gold-colored facade of steep cliffs echoes like a natural amphitheater. The uneven terrain of Guiana highlands is filled with grasslands, with diverse jungle along the undulating course of the rivers and at the base of the flat-topped mountains. Embark on a heart-pleasing and adrenaline-fueling voyage to the amazing Angel Falls.

Unlike other natural wonders in the world, Angel Falls were only discovered in 20th century. In 1937, an American gold prospector named James Crawford (Jimmy) Angels crashed his plane on top of a Tepui Mountain – from where the waterfall drops. The waterfall is named after him.

Things to Do in Angel Falls

Canaima National Park – Declared as a UNESCO World Heritage Site in 1994, this spectacular landscape comprises several waterfalls, rivers, cliffs, and mountains. Trek on the scenic trails and roads in the park or survey the pleasing vistas of the rainforest. The park is home to Mount Roraima, which is the highest point of Tepui plateaus in South America. Outsiders come here to uncover the legends, secluded lives, and culture of Pemon people.

Activity Tours – Mountain climbing, hiking, trekking, and guided sightseeing tours through the dramatic mountain valleys and gorges are popular travel itineraries. Kayaking and Canoeing tours in the Carrao River are provided by the local travel agencies.

Travelers can hike up to the top of the falls, take a boat tour or have a panoramic look from helicopter flights. And when the water level is low, you can swim in the pool at the bottom of the falls.

Where is Angel Falls?

The Angel Falls are located in the Guiana Highlands of Bolivar state in southeast Venezuela. It drops from Auyantepui (tabletop mountain) that lies within the Canaima National Park.

By Air – Simón Bolívar International Airport near Caracas (the capital of Venezuela) is the international gateway. It is accessible via flights to and from the Americas, Europe, and USA. Moreover, domestic flights operate between Canaima Airport and Tomás de Heres Airport in Ciudad Bolivar.

By Water – Take the upstream 5-hour boat ride from Canaima village on wooden ‘curiaras’ to the base of the falls.

The camp restaurants in the national park offer South American cuisine and delicious fruits. Meal and accommodation charges are usually included in package tours. To get a fine dining experience, you can head north to the city of Ciudad Bolívar. Restaurante Tijuanas, Gela Park, and Mezza Luna are good places to satisfy your taste buds.

You will find the waterfalls and surrounding jungle in full glory between May and November as the rainfall is frequent and the flow of water is voluminous.