Places to visit in Texas

Steeped in cowboy lore and contented with insurmountable pride, Texas is a real image of the southern US. From the Tex-Mex culture in Brownsville to the vast open panhandles near Amarillo and from the small town rodeo heritage to the live music concerts in urban areas, The Lone Star State is happening as ever. It’s a state where collision of cultures and religion goes well beyond football games and family barbecues. Simply put, Life is too short not to saddle up in Texas.

There are different national parks and other national sites located in the state of Texas. Fort Davis National Historic Site is famous for the Buffalo Soldiers (all-black regiments) who were stationed at Fort Davis from 1867 to 1885. Big Thicket National Preserve is another important site, with a rare reserve of flatland palmetto hardwoods, Savannah, floodplain forests, mixed hardwood, and pine forests. Check this National Parks in Texas Map locating all the national parks in the US.

San Antonio Missions National Historical Park – This historic site, comprising four Spanish mission churches, was recognized by UNESCO as World Heritage Site in 2015. Also the site of the Battle of the Alamo, the park embodies 300 years of culture and history. It includes pathways, riverside land, and cultivated fields along the Mission Trail.

National Parks & Gardens – The Guadalupe Mountains National Park in northeast Texas offers one of the best desert looks in the US. A visit to the Big Bend National Park gives you an idea how big Texas is. Incredible diversity thrives within an area of 1252 sq. miles. The coastal city of Galveston is home to Moody Gardens. Its spectacular glass pyramids (including the superb Aquarium Pyramid) remind you of the Louvre in the French capital.

Theme Parks & Water Parks – SeaWorld San Antonio is a favorite marine mammal park and an oceanarium in the US. When it gets really warm, Texans take a refuge in a water park. Schlitterbahn Waterpark in New Braunfels is where you can try water slide, water coaster, wave pool, and other thrilling activities to keep you cool.

Museums – The Museum of Fine Arts in Houston houses seminal works of Picasso, Rembrandt and other European painters. The Cullen Sculpture Garden across the street is where you get to admire the works of Rodin and Matisse. More than 100 years old, the Dallas Museum of Art has an exclusive collection of Egyptian, Greek, and Roman art of ancient days along with contemporary works. For a slightly different experience, come to the President Kennedy and the Sixth Floor Museum in Dallas. This red brick building offers a detailed account of Kennedy’s assassination.

The Houston Museum of Natural Science and National Museum of the Pacific War are other top picks along with Amon Carter Museum of American Art and the Kimbell Art Museum in Fort Worth.

Architecture – The 19th-century Texas State Capitol in Austin is known for its rotunda, the ‘whispering gallery’ and the wonderful use of red granite. On the outskirts of San Antonio lies the historic site of the Alamo. Over 2.5 million people visit this mission station-turned-fort that came into existence in 1718.

Space Center – Even if you are not too keen on wearing an astronaut’s suit and experiencing a space simulator, the Space Center in Houston offers a fascinating insight into NASA’s space operations. It houses NASA’s Lyndon B. Johnson Space Center and Mission Control. Places to visit in Texas

Things to Do in Texas

Whether it is fishing for bass in the Caddo Lake, devouring a chicken-fried steak in Strawn city, sipping down Dr Pepper, or attending Houston Livestock Show and Rodeo, there are plenty of bucket list points to check while you’re in Texas.

Beaches – Contrary to the popular notion, Texas is endowed with glamorous beaches. The southern Texas has a vibrant beach scene with round-the-year opportunity for surfing, kayaking and water sports in the beaches in Beaumont, Bay Area Houston, Galveston Island, South Padre Island, Port Aransas, and Port Arthur. Hundreds of miles of shoreline and bays await fishing, snorkeling, and diving expeditions.

Shopping – The Galleria in Houston, the high-end boutiques of West Village in Dallas, vintage shops on South Congress Avenue in Austin, and upscale stores at Alamo Heights in San Antonio are among the best places to shop. Austin Country Flea Market, Trader’s Village, and Sunny Flea Market are a bargainer’s nirvana.

Padre Island – This barrier island situated on the gulf coast provides an ideal background for recreational activities such as golfing, surfing, kite-boarding, and sailing. Isla Blanca Park and Laguna Madre Nature Trail are must-visit attractions on this beautiful island.

Festivals – State Fair of Texas is a 24-day long iconic event of the state held annually in Dallas. November through April is the fiesta time throughout the state. Do not miss out on the Texas Renaissance Festival, Texas Book Festival, South by Southwest, and ACL Music Festival.

Following are the major international airports in Texas –

Texas is located in the South Central region of the United States. It is bordered by New Mexico in the West, Oklahoma in the North, Arkansas in the northeast, and Louisiana in the East. The state shares international border with Mexico to the south and is bound by the Gulf of Mexico to the southeastern side.

How to Reach Texas?

By Train –Sunset Limited, Texas Eagle, and Heartland Flyer are the Amtrak passenger trains that travel through the major cities of the state. While the Dallas Area Rapid Transit (DART) operates bus and commuter rail system between Dallas and Forth Worth, the Capital MetroRail serves the Greater Austin area.

By Road – Major cities and even remote counties are easily accessible via State and US highways. I-10, I-20, I-35, and I-45 are some of the primary interstate highways. Greyhound, Vonlane, and Megabus are intercity bus services in the state.

• It was the 28th state to enter the union on December 29, 1845.
• Covering an area of around 261,000 square miles, it is, in fact, larger than any country in Europe.
• ‘Texas’ derives from the Caddo word tejas which means friends or allies.
• The state motto is simply ‘Friendship,’ and Rodeo is the official state sport.
• It is the second most populated (after California) and the second biggest state (after Alaska) in the US.
• Austin, the state capital, is also referred as “Live Music Capital of the World.”
• Furthermore, Austin has the largest urban bat colony in the world.
• Caddo Lake, a Ramsar Wetland, is the only natural lake in the state.
• Guadalupe is the highest mountain in Texas that rises to 2,667 meters above the sea level.
• The King Ranch – bigger than the state of Rhode Island – has over 2,000 miles of fencing.
• Dwight David Eisenhower, Howard Hughes, Janis Joplin, and Matthew McConaughey are some of the famous Texans. 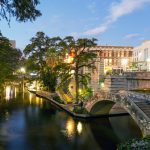 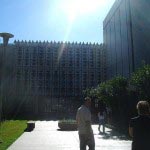 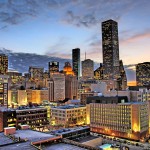