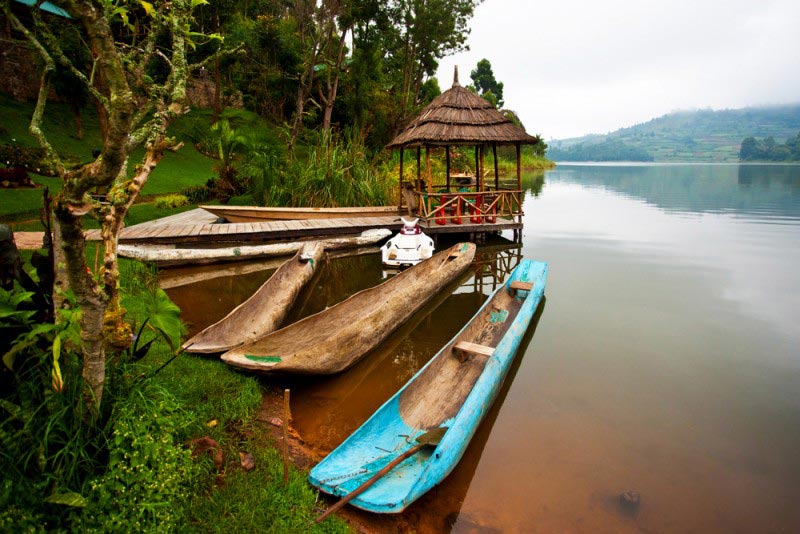 The phrase ‘Pearl of Africa’ was coined by Winston Churchill for Uganda, describing the stunning location of the country in the Equator. The safari destination of Uganda is nestled on the verdant forests of the islands in Lake Victoria.

Charming sights greet your eyes when you arrive here. Get enamored by the sprawling green golf course culminating to the lakeshore as well as a botanical garden which is 100 years old. The atmosphere filled with the chatter of acrobatic monkeys and chirping of vibrant tropical birds. Uganda houses the most diverse African fauna, which includes endangered species like the mountain gorilla (Gorilla gorilla) and the common chimpanzee (Pan troglodytes).

The south-west part of the country is a radiating side of the Great Rift Valley, which is still an active volcano. The most sought after activity here is Gorilla tracking as various troops of gorillas are spotted in three different locations. You would also find lions prowling in the lush greenery in the morning, afternoon is spent in tracking chimpanzees, and the very next day you embark on an expedition to see the streams full of hippopotamus and crocodiles. Uganda tours are indeed a thrilling experience.

The best way to reach Uganda is by plane. The Entebbe Airport is the main airport of Uganda. It is the hub for Ugandan air travel. Many flights to Uganda as well as other cities in Africa operate from here. There are direct flights to and from Johannesburg, which run three days a week on South African Airways. Also, flights directly come to and from Uganda to London every alternate day on British Air. Emirates offers flights from Entebbe to Dubai via Nairobi and Addis Ababa on Airbus A340S. This continues further down to Europe, North America, and Asia from Dubai. Ethiopian Airlines is another airline that offers service to Addis Ababa via Boeing 737s. Kenya Airways and KLM Airways fly daily from the Entebbe Airport to Amsterdam via Nairobi or directly. This shows that getting to Uganda by plane is quite conducive and easy from any part of the world. Several taxis and minibuses ply between the Entebbe airport and Kampala. However, in reality very few travelers think of getting to Uganda by
plane because most flights to East Africa from Europe and North America use Nairobi as their gateway.

Reaching Uganda by train is not a feasible idea as presently there is no passenger train service to or in Uganda.

Traveling to Uganda by car is hardly possible, though some people do try to come to the country by car from the very nearby areas.

Reaching Uganda by bus is another option for travelers. There are several bus companies in Uganda which offer direct lines between Kampala to Nairobi, Kigali, and Dar-Es-Salaam. There are also facilities of night buses from Kampala. Tourists can take a (matatu) or bus up to the border and walk to the other side of it. From the Kenyan capital, Nairobi, most people travel by bus to Uganda. The border posts used by most tourists travelling by bus from Kenya are Malaba and Busia. The route to Uganda from Tanzania goes through the Kagera salient on the western side of Lake Victoria. It is between Bukoba and Masaka. From Rawanda the main crossing point is between Kabale and Kigali, which is via Katuna (Uganda) and Gatuna (Rwanda). Besides, there are direct buses that operate from Kampala and Nairobi daily. Such a journey takes around 12 to 14 hours.

Intercity travel in Uganda is mainly by the boda boda – small mopeds, motorcycles, bicycles, or scooters with cushions on the back. They are quite cheap and are mostly used by locals. However, these boda bodas are accident prone. So, be very careful while on it with all the enjoyment kept aside. Uganda has a good and a balanced bus system. They normally leave Kampala early in the morning. Getting a seat in these buses is quite a task as many people avail them and they remain overcrowded. Both buses and taxis in Uganda run along most of the roads between cities, but they are not on fixed schedules. They leave the terminals only when they are filled up.

The best way of transportation in Uganda especially near Kampala and the neighboring towns is by the minibus-type taxis called matatus. This is the most efficient and cost-effective method of transportation in the urban areas of the country. However, they are crowded, cheap, frequent, and stop very often. They move along fixed routes. They are not marked with destinations, so tourists have to listen to the destinations that the drivers shout out. Taxis, called special-hire taxis, are also available in most of the towns. The drivers are generally aware of the time and length of the journeys. So, to get that idea you have to ask them.

Mountain climbing and hiking are a major part of entertainment in Uganda. The ‘Ruwenzori’ or ‘Mountains of the Moon’ lie along the western border of Uganda. The main summit of mountains is Margherita that rises out of the Stanley Plateau, the largest glaciated area on the continent. To its west is the endless expansion of the DRC jungle and to the east one can see the mists and clouds that rise up over the Lake Victoria basin. The animals that one can watch in these areas are Chimpanzee, Blue Monkey, Ruwenzori Colobus, Red Forest Duiker, Hyrax, and Leopard. These are the most common large mammals of Uganda. Some elephants and buffaloes can also be found. Uganda is most popular for its mountain gorillas. They can be seen mainly in Bwindi or Mgahinga National Parks.

Fishing also falls in the category of things to do in Uganda. There are 84 islands adorned with forests in Uganda of the Ssese group. These beautiful islands are scattered like green jewels on the waters of Lake Victoria that stretches to 55 km. from Entebbe. Only the largest of the islands have any development of any kind. The rest remains virgin with all the tropical forests full of birds and monkeys, white sand beaches, and crystal clear water.

In Uganda one can get to see over 1000 species of birds. With the help of custom built safari vehicles the bird guides will show you all the sights and sounds of Uganda, a lifetime experience.

If you like driving in the spree for adventure, then this is the right place for you. 4×4 off-road and defensive driving courses are available on the markets. The site contains 4WD resources, forum, online driver support, classifieds, and much more.

Places to see
Tourist hotspots in Uganda are: