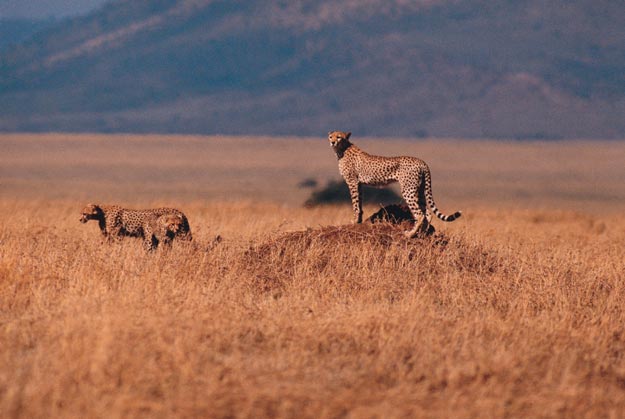 Serengeti in Maasai language means “the place where the land runs on forever.”

The Serengeti is an unspoilt and untamed wilderness and also the greatest game park in Africa. Unending horizon, limitless short-grass pastures, and sapphire skies of Serengeti bring a glint to worn souls of travelers. It’s a primordial land where only the most primitive laws of nature apply — kill or be killed, eat or be eaten! These vast plains may be a utopia for escapists and nature lovers; but to the hordes of unsophisticated beasts – like the Big Five – it is simply a playground.

American explorer Stewart Edward White was the first outsider to visit the region in 1913. Established in 1951, it is the oldest national park in Tanzania. Its name in Maasai language (Serenget) means “the place where the land runs on forever.” It was designated a UNESCO World Heritage Site in 1981.

Things to Do in Serengeti National Park

As the lions pounce, elephants trample, hyenas cackle, hippos splash, and gazelles traverse in the blink of an eye; like the Elton John’s song ‘Circle of Life’, “there’s more to see than can ever be seen, more to do than can ever be done.”

The Great Migration – Few people ever forget the moments of beholding this greatest wildlife spectacle on earth. Nothing can rival the sight of annual migration of hoofed animals: around 1.7 million wildebeests, 200,000 zebras, gazelles, and buffaloes. This 1,000-mile-long movement starts in late November near Ngorongoro crater in southern Serengeti and reaches the Maasai Mara National Reserve in northern Serengeti.
Within short period in February, almost 8,000 wildebeest calves are born each day in this grazing pilgrimage. Nature takes its course when thousands of wildebeests and zebras leap into the murky waters of the crocodile-infested Mara River and Grumeti River; most animals survive and some meet their maker by landing in crocodile’s jaws.

Wildlife viewing – Within the boundaries of Serengeti, there are more than 70 species of large mammals and 500 kinds of birds. Take out your binoculars to feel the power of the Big Five – lion, leopard, elephant, buffalo, and rhino – and meet the Little Five – antlion, rhino beetle, elephant shrew, buffalo weaver, and leopard tortoise. Go for open-jeep safaris on well-worn safari roads and wait near watering holes where antelopes, impalas, giraffes, and other animals come to quench their thirst. The western corridor offers an extremely rewarding experience for travelers keen on game viewing and birdwatching in Serengeti.

Hot Air Balloon Safaris – After you’ve had enough of bumpy ride, opt for an enchanting hot air balloon ride over the endless plains to get a bird’s eye view of the wildlife.

Night Game Drives – Go on a game drive in night allows a unique opportunity to spot nocturnal animals like hunting lions and cackling hyenas. Tour operators, which provide such thrilling experience, can be found near Ikoma Wild Camp.

Serengeti Visitor Center – Located near Seronera Airstrip in the small settlement of Mara, this place is an attraction in its own right. Self-guided walking paths with informative signs convey the history of Serengeti, Swahili culture and customs, and semi-nomadic life of the Maasai people in African bush. It’s as good a place as any to embark on cultural tours, adventure tours, and multiple-day jungle safaris.

Shopping – For those who’d like to bring back something else than photographs and memories, the city of Arusha and other larger towns have curio markets. Make sure to bargain hard for carvings, masks, Maasai spears, textiles, drums, jewelry, and handicraft. The Arusha Heritage Center offers a large variety of souvenirs and crafts. Shopping in Serengeti is limited due to the absence of permanent human settlements.

Serengeti National Park is located in Mara Region along the northern border of Tanzania with Kenya. The national park is roughly 208 miles (335km) from Arusha and 161 miles (260 km) from Nairobi — the capital of Kenya.

By Air – Kilimanjaro International Airport (JRO), known as “Gateway to Africa’s Wildlife Heritage”, serves the city of Arusha and Moshi. Most organized safari rides in Tanzania begin from Arusha. Furthermore, domestic flights from Arusha to Seronera Airstrip are another viable option.

By Train – Arusha Railway Station is connected with passenger trains from Dar es Salaam and Dodoma.

By Road – Highway B144 passes through the heart of the national park. Rented cabs, tour buses, and safari coaches ply frequently from Arusha.

Depending upon your budget, accommodations in Serengeti range from safari lodges and public campsites to luxury tented camps and mobile camps. Mbuzi Mawe Tented Camp, Seronera Lodge, Lobo Wildlife Lodge, and Sopa Ngorogoro Hotel are good options to stay overnight in the park.

Nearly all lodges and camps in the park have restaurants serving exotic African cuisine. For a fine dining experience head to restaurants in Arusha like Stiggy’s Thai Restaurant, Pepe Italian Restaurant, and Khan’s Restaurant.

The Serengeti region offers game viewing all year round. However, to witness the Great Migration go on safaris in the dry season — from late June to September. Winter, when the weather is pleasant, is another ideal time to enjoy recreational activities like birdwatching.