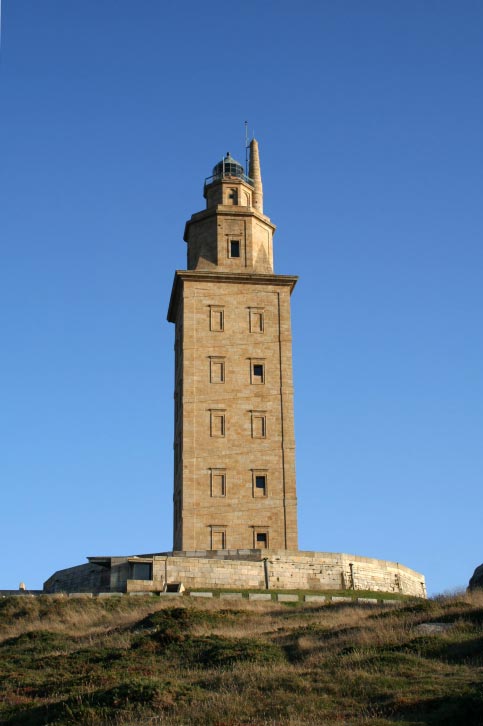 The Tower of Hercules is notable for being one of few examples of a surviving Greco-Roman lighthouse.

The Tower of Hercules is an ancient lighthouse that stands at the opening of La Coruña harbor on the northwestern coast of Spain. The lighthouse stands along the sea route from the Mediterranean Sea to northwestern Europe.

The Tower of Hercules is notable for being one of few examples of a surviving Greco-Roman lighthouse, and the oldest of its kind that has remained in use, though it has undergone construction. The lighthouse stands along the coast as a symbol for the lasting power of the Romans and their impressive architectural knowledge. The structure has withstood the wear and tear of the winds and waters of the coast, and even devastating earthquakes couldn’t knock it down.

Many legends have surrounded the Tower of Hercules, claiming mythical origins. The tower’s namesake, Hercules, is said to have won a fight with a giant, and buried its head and weapons at the site. Other mythologies of the structure include a Gaelic Celtic legend, in which King Breogán had the site built to stand as a beacon to his sons. For this legend, a statue of the king continues to guard the lighthouse.

Built in the 1st century AD by the Romans, likely during Trajan’s rule, the tower was known as Farum Brigantium, after the lighthouse in Alexandria, Egypt’s island, Pharos. However, the tower has gone through many names over its long history. Roman explorers arrived in La Coruña’s port of Brigantium around 61BC, and began to colonize the area. The port was important for defense and trade, guarding the entrance to the Bay of Biscay. The area had been a dangerous one for ships, dubbed the Coast of Death by the early Roman seamen. Though the presence of lighthouse has helped to increase safety, the orientation of the light house seems to have been constructed to aid travelers coming from the area that is now the United Kingdom, rather than those coming from the mainland of Europe.

The tower has been restored several times over its history, and probably had some reconstructions in around 1684. Later, the tower was again restored during the 18th century by Eustaquio Giannini, a naval engineer, who altered the form of the tower and added 21 meters in height to the once 34-meter tall tower. Construction on the tower was continued by Giannini’s brother, Jose Giannini from 1799 to 1806.

Though it still functions today, the lighthouse was not used continuously throughout history, with a long period of disuse – probably after the Viking invasions. The tower itself may still have been used during this time. The town around the tower thrived during the 11th or 12th century, and the townspeople used the structure as a defensive observation post. The town grew rapidly in the 14th and 15th centuries, and the tower was heralded as an icon of the city.

The site was excavated in the 1990s, and historians were able to discover more information about the tower’s history, particularly regarding its Roman origins.

Where is Tower of Hercules?

The Tower of Hercules is located in the city of La Coruña (also referred to as A Coruña) in Spain’s autonomous region, Galicia. Galicia is a large region in northwestern Spain. La Coruña is served by the A Coruña Airport, or Alvedro Airport, just outside the city. Alternatively, the Santiago de Compostela airport, Lavacolla is a larger airport in the region, though it is farther away. The city’s train and bus stations also offer service with both domestic and international destinations. To get around town, recommended transportation options are car rental, the tram, or a taxi.

As the town of La Coruña is located on the northern coast of Spain, the climate is not what many expect of the warm, Mediterranean Spain. Cooler and more variable weather is what is found in this coastal area, with fewer extremes in temperature. August boasts of long and generally warm days, which are perfect for visiting the beaches and the Tower of Hercules.

Nearby Attractions of Tower of Hercules