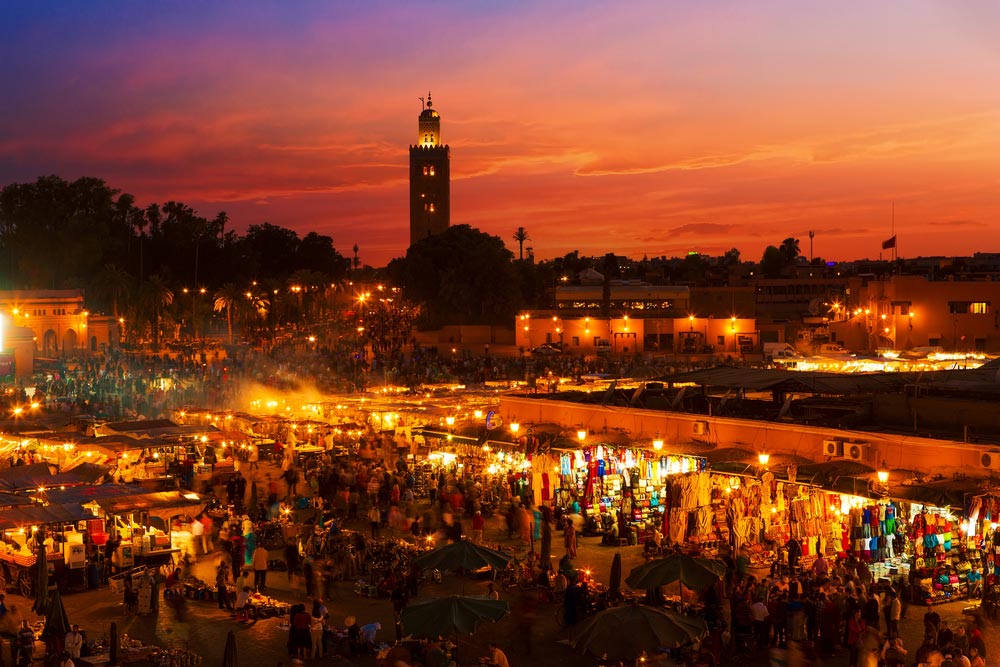 Morocco’s beauty lies in its munificence. This imperial (and liberal) city in Northern Africa is a prelude to the layered beauty of Moroccan culture. Burgeoning economy, consumerist landscape, traditional Berber markets, Atlas highlands, ancient ramparts of Medina, and omnipresent Orange trees are the underlying filaments of Marrakech. This erstwhile capital of Almoravid dynasty is a more regal cousin of Casablanca and Tangier.

Things to Do in Marrakech

Hot Air Balloon Rides – As you take this safe and comfortable ride, what appears before you is a mesmerizing view of Atlas mountains, secluded Berber villages, and desert landscape near the city. You can relish the comforting silence while having breakfast in your balloon basket. These flights are run by a few private operators, usually in the early morning.

Spend Your Dirhams – Medina is an old historic district and a UNESCO World Heritage Site known for labyrinthine alleys, refreshing Hammams, and the gifted craftsmen. The whiff of olives, sights of colorful lanterns, rich carpets & rugs, haggling shopkeepers, and an understandable curiosity among the tourists make the souks (open-air markets) even more bustling. Learn to say no, bargain before buying, and launch a shopping spree. Souk Semmarine, Souk Ableuh, Souk Kchacha, and the Mellah are must-visit places in Medina.

Desert Trekking – Do not miss out on half-day excursions to enjoy a Camel trek through the Palm Grove of Marrakech.

DJemaa el-Fnaa – Once founded by Almoravids, this main square is a UNESCO-recognized site. A melting pot of street performers, storytellers, magicians, snake charmers, and herb sellers – this is the most animated place in the city. Its market is filled with frolics, voices, gestures, smells, touches, and tastes.

Koutoubia Mosque – It is the oldest of the three great Almohad minarets left in the world. Curved windows, decorative arches, and pointed merlons add to the everlasting beauty of this 70-m-tall mosque made out of red stone.

El Badi Palace – Although only the remains of this ‘incomparable one’ are present, yet the palace still holds its reputation for being a top destination in the city. Marrakech Folklore Festival is organized every June, within this vast Saadian structure.

Ben Youssef Mosque – Built in late 12th century, it is arguably the oldest and most significant building in the Medina quarters of the city. This sacred site is a place of worship for Muslim visitors.

Saadian Tombs – This mausoleum has the interred remains of the members of the Saadi Dynasty. The room with 12 columns is the highlight of this monument.

Almoravid Koubba – The only surviving remnant of Almoravid architecture has gone through several restorations.

Majorelle Garden (Jardin Majorelle) – Covering an area of more than 12 acres, this garden has a collection of cacti, pools, and fountains. Over 15 bird species can be spotted inside the garden. The blue building of Museum of Islamic Arts displays Islamic artifacts, Irke pottery, and vintage decorations.

Devote your time to savoring Berber cuisine and trying Mediterranean and Arabic delicacies in between. French elegance of Le Jardin, traditional Moroccan setting of Dor Moha, Le Marrakchi and Dar Yacout, and contemporary Bo-Zin are too tempting for diners to resist. You can also eat like locals in the food stalls of DJemaa el-Fnaa.

Often cited as the Red City or Ochre city, Marrakech lies in the foothills of Atlas mountain range of Morocco in the south-western region.

By Air – Marrakech-Menara Airport (RAK) is about 9 km southwest from Medina and has flights to nearby European cities. Bus no.19 runs between airport and major parts of the city.

By Train – Station Marrakech connects the city with direct trains to Casablanca, Tangier, and Fez.

By Road – A7 is an expressway that connects the city with Casablanca to the north and Agadir to the west. CTM, Pullman du sud, and Supratours are notable bus companies for long-distance travel.

Marrakech is known for its sun-kissed weather. It is advisable to visit the city between October and May to avoid the heat and crowd. However, popular events like Fantasia and Marrakech Popular Arts Festival take place only during the summer.