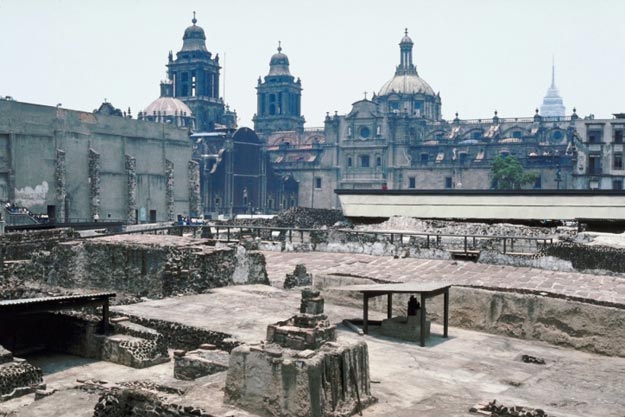 Templo Mayor in Tenochtitlan (now Mexico City), the main temple of the Aztecs, was a place to make offerings to the god of war, Huitzilopochtli, and the god of rain and agriculture, Tlaloc. The stepped pyramid had a shrine to each of these gods at the top, accessed by staircases. The original temple was built around 1325, but was destroyed and rebuilt six times. The temple has been constructed in the style of the late Postclassic period of Mesoamerica.

Some historians say that the Mayor temple was partly a symbolic representation of the Hill of Coatepec, mythological place of the birth of Huitzilopochtli. According to the Mexican myth, Huitzilopochtli was born as a completely grown warrior replete with arms from the womb of his mother Coatlicue. He was born to fight against his sister Coyolxauhqui and her brothers the Centzon Huitznahua who wanted to kill him and their mother. Huitzilopochtli was triumphant, dismembering his sister. He threw her body to the bottom of the hill. The southern half of the Mayor temple symbolized Coatepec, and the big stone disk with Coyolxauhqui’s dismembered body was discovered at the foot of this side of the temple.

The Great Aztec Temple saw many human sacrifices, and was soon destroyed by Spanish colonists in 1521. The Spanish took over the city as they colonized, building their colony over the ruins.

On 25th February 1978, when the workers for the electric company were digging at a place called the ‘island of the dogs’, over two meters down they discovered a pre-Hispanic stone. The stone was found to have been dated to the end of the 15th century. The embossment on the stone represented Coyolxauhqui, the moon goddess. The temple measures 100 by 80 m (328 by 262 ft) at its base.

The site consists of two divisions, first the temple along with its developmental process while the other has allied buildings and a museum. The objects found during the excavation are now displayed in the Templo Mayor museum. Many of the items displayed in the museum are believed to be offerings, from stones and sculptures to human remains.

Where is Templo Mayor?

The Aztec capital was Tenochtitlan, which later became Mexico City. Templo Mayor was the main temple of the Aztec capital, in the main plaza of the city, in the Historic Center of Mexico City. The temple’s location is said to be where Huitzilopochtli, the god of war, told the Mexica people that they had found the promised land. You can reach the Templo Mayor Aztec Temple by approx. 20 minutes drive from the Aeropuerto Internacional Benito Juárez, Peñón de Los Baños, Venustiano Carranza, Mexico City, Mexico.

The dry season in Mexico City lasts from November to April, and spring tends to have warm pleasant weather. It is best to avoid rain when visiting because the ruins are outside, although the museum can be visited any time of year.

The ticket to the temple costs $57 MXP (Mexican Pesos). It includes the entry to both the museum and the archaeological site. Children under 13, students, teachers and senior citizens presenting a valid ID are allowed free entry. On Sundays the entry is free for all the visitors.