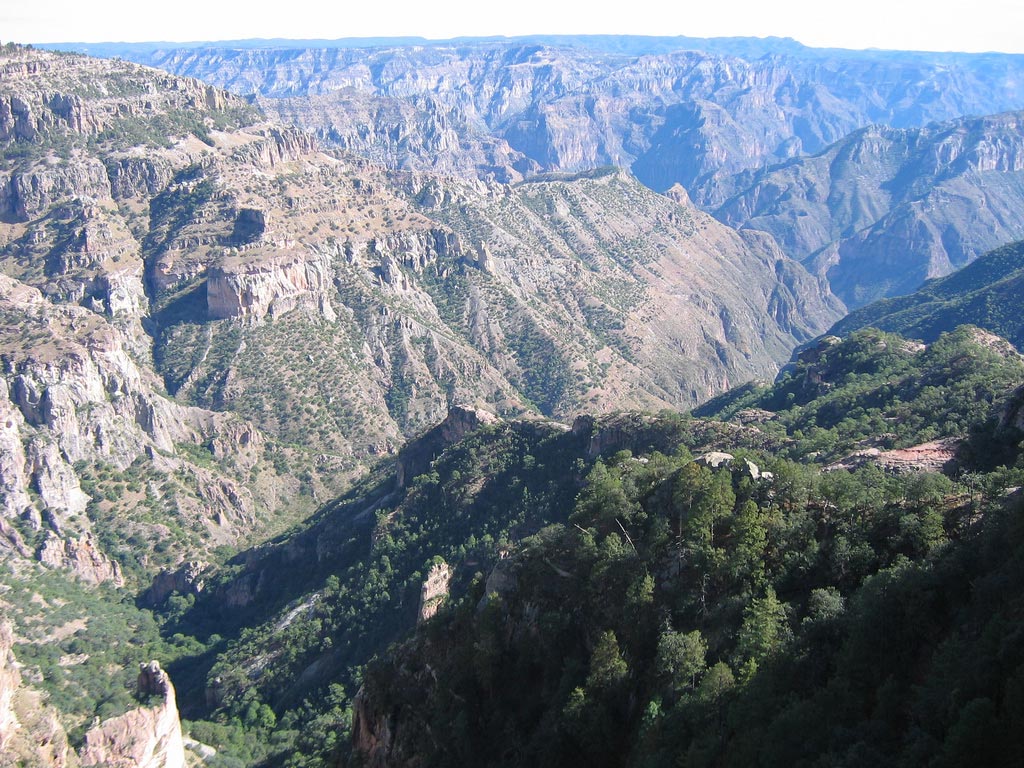 Copper Canyon is a system of canyons in northern Mexico, which were formed from six rivers that eventually all flow into the Rio Fuerte, a big river that meets the Sea of Cortez. The six canyons in Copper Canyon, when combined, are larger than the Grand Canyon. The Copper Canyon was named for the coppery colored rock from which the canyons are carved.

Aside from the canyons, there are hot springs and a wide variety of wildflowers which decorate the Copper Canyon after the rains. Hiking, biking, and driving are popular ways to get around Copper Canyon to experience all it has to offer. In addition a railway line, the Ferrocarril Chihuahua al Pacifica (El Chepe for short), is a popular way to view the canyon, as it runs alongside one of the large canyons, Canyon Urique, offering great views along the way.

The canyon houses several hot springs: the popular ones are the Recohuata (Recowata). The hot springs located near Creel have been canalized into a number of concrete pools. The rustic feel of these springs fuses properly with the natural beauty of the area.

Visitors to Copper Canyon may also be able to see some people of the Raramuri (or Tarahumara) tribe of native Americans, who are famous for their incredible endurance when running.

As a result of the increasing population, the ecosystems of the Sierra Tarahumara Occidental region are facing danger. The facilities to increase tourism are becoming a cause of the threats to the place. The construction of roads, cutting of trees for the manufacture of charcoal and over harvesting are some other reasons that provoke a feeling of concern towards this place. Although the government is taking measures for the conservation of the natural environment of the Copper Canyon, yet the speed is slow.

Visitors are advised to use eco-friendly ways to get around the canyon. Copper Canyon is one of the natural inheritances bestowed to human beings. Thus, we owe special responsibility to this place.

Visitors to Copper Canyon may also be able to see some people of the Raramuri (or Tarahumara) tribe of native Americans, who are famous for their incredible endurance when running.

Where is Copper Canyon In Mexico (Barrancas Del Cobre)?

Copper Canyon is situated in the Sierra Tarahumara of Chihuahua, Mexico. The canyons can be usually accessed from the nearby towns of Creel or Hidalgo de Parall by road or train. Within the canyons are the towns of Batopilas and Urique. Gen Fierro Villalobos Airport in Chihuahua, Mexico, is the nearest airport. Los Mochis International Airport in Sinaloa, Mexico, is another option for travelers who wish to fly to Mexico to view the Copper Canyon.

The region experiences its most moderate temperatures in October, November, March, and April. July marks the start of the wet season and the warmest months are from April to June.