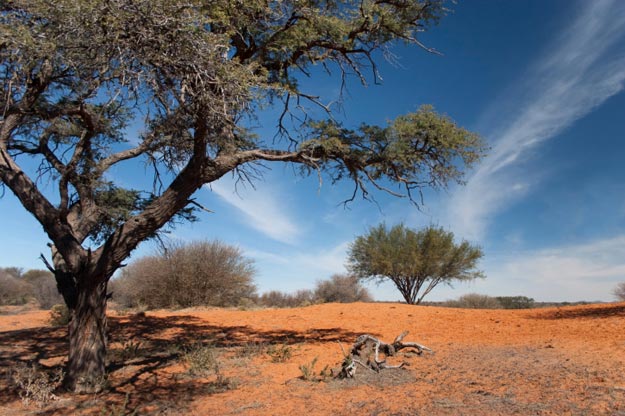 Landscape from the Kalahari Desert in Africa

The seemingly infinite semi-arid deserts of the Kalahari in Botswana offer visitors unique experiences of unspoiled nature. The word Kalahari is inspired from the Tswana word Kgala, translated as “the great thirst”, or Kalagare, Kgalagadi or Khalagari that mean “a waterless place”. A land of extremes, droughts and harsh weather, the Kalahari also supports a variety of plants and wildlife, including black-maned lions, hyenas, cheetahs, leopards, zebras, and flamingos.

The vast space has a variety of landscapes including red sands and grasslands. Even though the desert is dry and arid, yet it supports a variety of flora such as African horned cucumber, acacia trees, hedged gourd and the Kiwano fruit, etc.

Riemvasmaak, a village in the desert, offers a glimpse into the lives of semi-nomadic sheep and goat herders, and visitors can also experience rides across the red sands on a donkey cart.

There are several settlements in the Kalahari desert. The area of Botswana comprises of Ghanzi, Tshane, Tshabong and Orapa districts. Gobabis and Mariental in Namibia, and Rietfontein and Noenieput in South Africa are some other settlements.

The Senqu (Orange) River meets with its tributary the Vaal River and flows through the Kalahari region, surrounded by the fertile area, complete with vineyards.

Activities in the Kalahari Desert include safaris, as well as sand-boarding down the sand dunes, and soaking in the mineral hot springs. In the evenings you can watch the vibrant orange sunsets, and go stargazing under the clear skies of southern Africa.

Where is Kalahari Desert?

The Kalahari Desert covers most of Botswana and a small section of Namibia in South Africa and extends into Angola, Zambia, and Zimbabwe. The nearest Airport is Johannesburg International Airport. People usually prefer to go to the Kalahari Desert via roadways from either of these three countries: Botswana, Namibia and Zimbabwe.

Spring season is one of the best times to visit the Kalahari Desert to catch a glimpse of the blooming, colorful wild flowers in Namakwa. The waterfalls will also be at their peak during and after the rainy season.