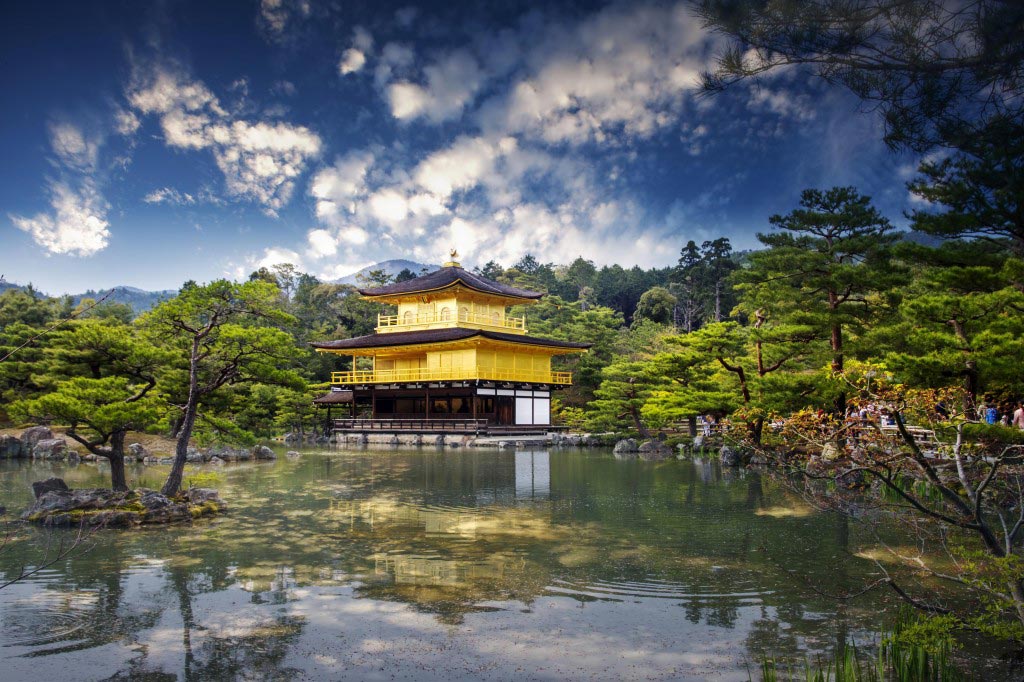 Golden Pavilion is one of the main buildings of a Buddhist temple in Kyoto, Japan officially known as Rukon-ji. The name of this building comes from the term, Kinkakuji and the building is literally covered in gold. It is also surrounded by lovely gardens. Golden Pavilion is one of the most famous buildings in the country that attracts a lot of tourists every year. The site once belonged to a powerful statesman. It was later purchased by Shogun Ashikaga Yoshimitsu and transformed into what it is today. This structure was rebuilt in 1955. They say that the reconstruction was kept quite close to what it used to be before but people believe that not too much of extensive gold-leaf coating had been used in the original building. In 1984, there was some decay in the coating and a thicker coating was completed three years after that. In addition to this, the paintings and a statue inside the building were also restored.

Out of the three stories in the building, the top two are completely covered in pure gold. Apart from being surrounded by beautiful gardens, the building also has a pond in front known as the Kyôkô Pond (Mirror Pond). Visitors look at the building from across the pond before passing by the head priest’s former living quarters, which are not yet open to the visitors.

Visitors can choose their accommodation in Kyoto depending on their budget and taste since there are a wide variety of hotels available. This site is a must visit and is one of the most enchanting sights one can come across in their lives.

Where is Kinkakuji (Golden Pavilion)?

Golden Pavilion is located in Kyoto, which is Japan’s seventh largest city. You can get to Golden Pavilion from Kyoto Station within a little more than half an hour. It is also possible to take the subway from the Karasuma Subway Line to Kitaoji station and then by taking a taxi or bus from there. This journey would take half an hour as well.

The site is open from 9:00 a.m. to 5:00 p.m. Spring and Autumn months are an appropriate time to visit Kyoto since the weather is favorable for visits during those months. There’s good amount of rainfall in June and August is the hottest month in the year so it’s best to avoid visiting the city during these months. The first week of May is famous when it comes to vacationing in Japan.