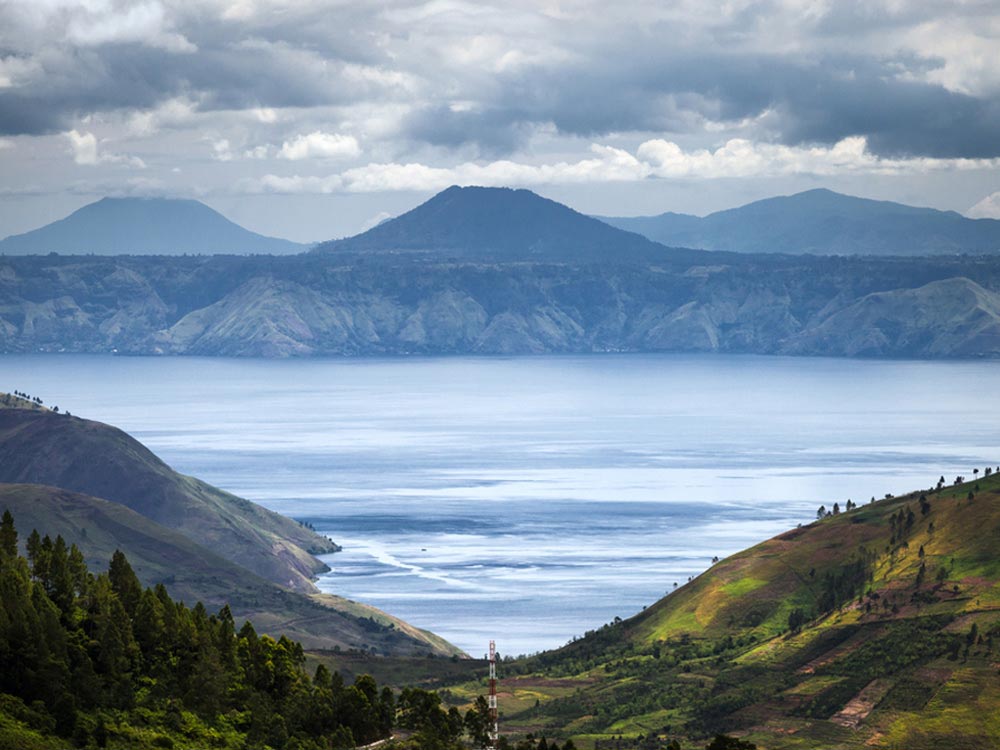 The largest volcanic lake in the world – Lake Toba is one of the best places for sightseeing in Sumatra, Indonesia. Created by the deposition of rainwater in a volcanic crater, Lake Toba is 100 kilometers long and 30 kilometers wide. The deepest point of the lake delves till 505 meters.

The lake is surrounded by a number of natural marvels like Toba ash, characterized by chemical “fingerprint”. The climate around the lake is cool and dry. The steep and scenic landscape of the mountains offers spectacular vistas. Lake Toba is one of the best places in Indonesia that presents you with an ideal place for an escapade from the urban jungles. More and more tourists throng towards the lake as it is a better place to rest than the mosquito-infested tropical jungles.

Lake Toba is one of the major facilitators of eco-tourism in Indonesia. The population that resides near the lake mostly belongs to the ethnic Bataks. The houses of these traditional Bataks feature roofs that curve upwards at each end, are similar to a boat’s hull. The colorful décor of these houses near Lake Toba makes them all the more prominent.

Lake Toba is located in Samosir Island. The island has some interesting tourist places such as cemeteries for Batak people, Batak Museum, Tomok – a place to buy souvenirs, and Ambarita – stone chairs used for judgement and executions. You may also visit hot springs in the vicinity of Pangururan.

UPDATE: Rovicky Dwi Putrohari, the president of the Indonesia Geological Experts Association revealed about the perils Mount Toba poses. According to scientists, Lake Toba’s volcano may erupt anytime. The researchers are endeavoring to find out the intensity of damage the volcano is likely to cause. It is known to have caused a massive destruction at the time of its last eruption.

Where is Lake Toba?

Located in North Sumatra province, Lake Toba lies near a fault line which runs along the Sumatra Fracture Zone. Tourists prefer to fly to the Medan Kuala Namu International Airport and then reach the Lake Toba via train, bus, car, or ferry.

The best time to visit Lake Toba in Sumatra is between May and September when the weather is dry.