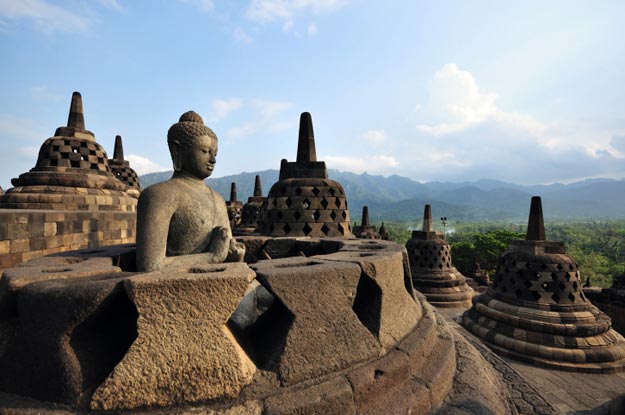 A shrine to Buddha and a popular destination for Buddhist pilgrimages, Borobudur is a monument built in the form of a stepped-pyramid topped with stupas and about 500 statues of Buddha. Built during the reign of the Seilendra Dynasty of the eight and ninth centuries, the temple reflects Indian and Indonesian influences in its stairways and corridors, lined with narrative panels of art carved into the stone walls. Though the site was a destination for Buddhist pilgrims for many years, it was abandoned in the 1500s, probably with the rise in Islam in the region, though it has recently been revived.

The top of the temple has some vacant space that gives a sense of completeness to Borobudur. From here one can enjoy the panoramic views of the surrounding lush mountain landscape. Towards the north of Borobudur is the Menorah hill, naturally contoured to give an impression of a sleeping person.

According to the local superstition it is believed that if anyone climbs this temple while meditating upon one of his wishes, and reaches his hand inside the bell-like stupa at the top of the temple, and successfully touches the Buddha’s figure inside; his wish is granted.

To know more about this magnificent temple you must visit Karmawibhangga Museum located inside the Temple premises.

The museum of Samudera Raksa is another attraction of the Borobudur temple that provides information on the merchants who traveled to Indonesia and Africa in ancient times. It is a contemporary attempt to recreate those voyages.

Located in Magelang, Central Java, Indonesia, the monument is about 40 kilometers (25 miles) from Yogyakarta, just a day trip away. From the nearby Yogyakarta’s Adisucipto International Airport or Solo’s Adisumarmo International Airport, you can hire a taxi to Borobudur. There are also lodging opportunities available very close to the site for those who want to spend more than a few hours at the sacred site. Although the local bus service is also available, yet it is advisable to hire a car as the bus services from Yogyakarta to Borobudur are targeted mostly at Indonesian visitors. If you are adventurous, you can try the Trans-Jogya service as the Trans-Jakarta staff and Jombor station staff are quite friendly. Minibus tour packages priced Rp 75,000 are also available. Some travel agents offering these tours may stop off at batik and silver factories along the route. Yogyakarta is well connected via rail routes to Jakarta, Surabaya and Bandung. You can also choose railways for your journey.

Vesak (Waisak) the Buddhist holy day, commemorating the birth, death and wisdom of Buddha, is celebrated annually at Borobudur, usually in April or May. In June, the park hosts a performance of the Mahakarya Borobudur, a traditional Javanese ballet. Sunrise tours are offered and can be a peaceful and less crowded time to experience the temple.

The tickets for Indonesian locals or KITAS card holders are priced at IDR 30.000. The Indonesian local children’s ticket costs IDR 12.500. For foreigners, the prices are high. Whereas the ticket for an adult is priced at IDR 190.000, foreigner registered students have to pay IDR 95.000 for entering the Temple.