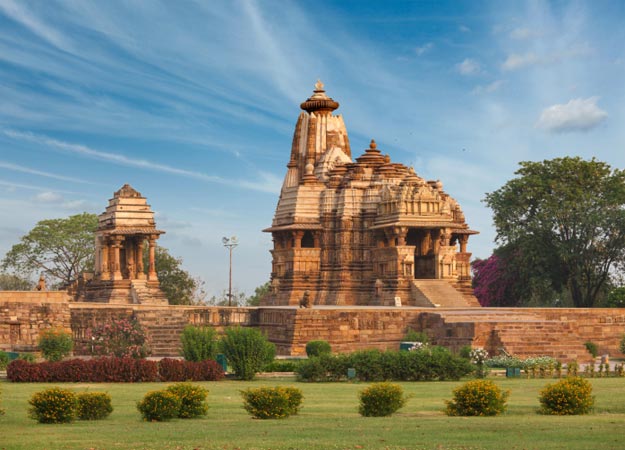 One of the most popular attractions in India, the Khajuraho Temples are the largest group of medieval Hindu and Jain temples. The temples are known for the erotic sculptures within.
The Khajuraho Temples were built during the Chandela Dynasty of Central India. After the fall of the dynasty, the temples were abandoned and forgotten and only 22 of the original 85 temples survived when they were rediscovered by a British army engineer, Captain T.S. Burt.
The temples are grouped into western, eastern, and southern sections. Inside the temples are detailed carvings and sculptures depicting scenes from life, such as war, marriage, symbols of spirituality, every day life, and all kinds of life forms. Various temples are dedicated to gods like Shiva, Surya, and Lord Vishnu.

Kandariya Mahadeva temple is a temple which is famous throughout the world. It is has the highest spire in Khajuraho boasting a size of 30.5 meters.

Representing a unique artistic creation, the Lakshamana temple features sculptures of Lord Vishnu and his incarnations as Lord Narasimha, Lord Varaha, and Bhagvan Vamana. The statue of goddess Lakshmi stands in between Lord Brahma and Lord Vishnu. There is also a statue of goddess Durga killing the devil Mahishasur.

Where is Khajuraho Temples?

The months from September through March are recommended as the best months to visit the Khajuraho Temples. Summers in the state are fairly hot, so winter is considered a better option. The annual Khajuraho dance festival takes place in spring every year.

The entry ticket for Indian visitors cost Rs. 10 per person and for foreign visitors, it is $10 per person (to be paid in Indian currency).