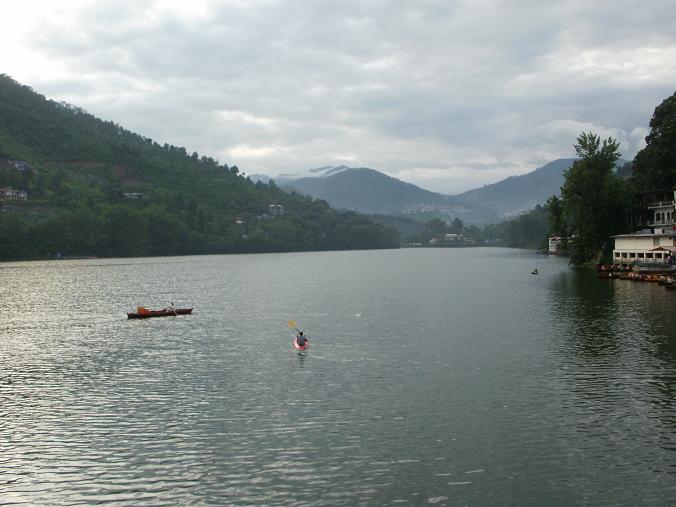 Bhimtal is a picturesque town famous for its Lake

Bhimtal is a picturesque town located in the state of Uttarakhand, India. The town is blessed with beautiful natural scenery and amazing climate that has made the place very popular with tourists. Not only that, Bhimtal is also less crowded as compared to nearby hill station Nainital, which has made it the preferred choice for travelers who are looking for some peace and quietude.

Places to visit in Bhimtal

Bhimtal Lake: It is the largest lake in Bhimtal. The water in the lake is quite clear and surrounded by lush greenery from all sides. The lake also supports a large variety of marine life. A number of birds also stop by during the migration season, making it very popular with birdwatchers and eco-tourists. Boating in the lake is the most popular activity and is the only way to get to the island located in the middle of the lake. The island used to have a restaurant that was very popular with tourists; however, due to environmental concerns, it was replaced by an aquarium as the restaurant was leading to pollution in the lake. The aquarium exhibits exotic fishes from countries such as South Africa, China, and even Mexico.

Victoria Dam: Victoria Dam is a 40-foot high structure located at one end of the lake that offers beautiful views of the region and the lake. The dam is especially popular with nature lovers as it has terrace flower gardens on either side with a spectacular view of the wildflowers in the gorge.

Bhimeshwara Mahadev Temple: It is located on the banks of Bhimtal Lake, next to Victoria Dam, and is dedicated to Lord Shiva. It was built in the 17th century by Baz Bahadur of the Chand Dynasty, who was the Raja of Kumaon. However, it is said that there was another temple here that was built during the time of Bhima and the Pandavas from The Mahabharata.

Nal Damyanti Tal: This is a natural lake located close to Bhimtal. According to a local legend, King Nal from The Mahabharata is said to have drowned in this lake and hence the place is considered to be scared by the locals. It is named after the mythological characters of King Nal and his wife Damayanti.

Hidimba Peak: Located a couple of kilometers away from Bhimtal, Hidimba Parvat offers visitors spectacular view of the surrounding area. The place is named after a rakshasa Hidimba who had challenged the Pandavas and was eventually killed by Bhima. These days, a monk and environmentalist named Bankhandi Maharaj lives here and has created Bankhandi Ashram, a sanctuary for animals living around the hill. Another popular hill close to Bhimtal is Garg Parvat and is the source of the River Gargi.

Mukteshwar: It is another very popular tourist destination in India due to the spectacular views of the Himalayas, including Nanda Devi, India’s second highest peak, it offers. The town is located a couple of kilometers away from Bhimtal and is also known for a 350-year-old temple dedicated to Lord Shiva. Its beetling cliffs, locally known as Chauli-ki-Jali, are renowned among rock climbers and rappellers.

Sattal: Also called Sat Tal, the place is only a few kilometers from Bhimtal and is famous for its seven interconnected lakes as well as its rich biodiversity. It is a must for any eco-tourist.

Almora: Almora is located further north of Bhimtal and offers visitors spectacular views of the Himalayas along with a variety of other attractions such as fine-looking handicrafts, delectable cuisine and rich wildlife. As a result, a large number of visitors come to see it annually.

Nainital: One of the most popular tourist destinations in the area, Nainital is most famous for the Naini Lake as well as the Nainital Zoo. The town also offers treks and extensive shopping opportunities to the visitors.

Bhimtal is located in the Nainital district of Uttarakhand, India.

Kathgodam Railway Station is the closest railway station to Bhimtal. It is about 21 km away and it will take just over half an hour to cover the distance.

Bhimtal is well-connected to all its nearby cities and towns by roadways. There are a number of state-run as well as private buses that are available.

February to April and August to November are considered to be the best times to visit Bhimtal.

What is the distance between Delhi and Bhimtal?

The distance between Delhi and Bhimtal is less than 300 km. A drive will take about six and a half hours.

What is the elevation of Bhimtal?

What is the temperature in Bhimtal?