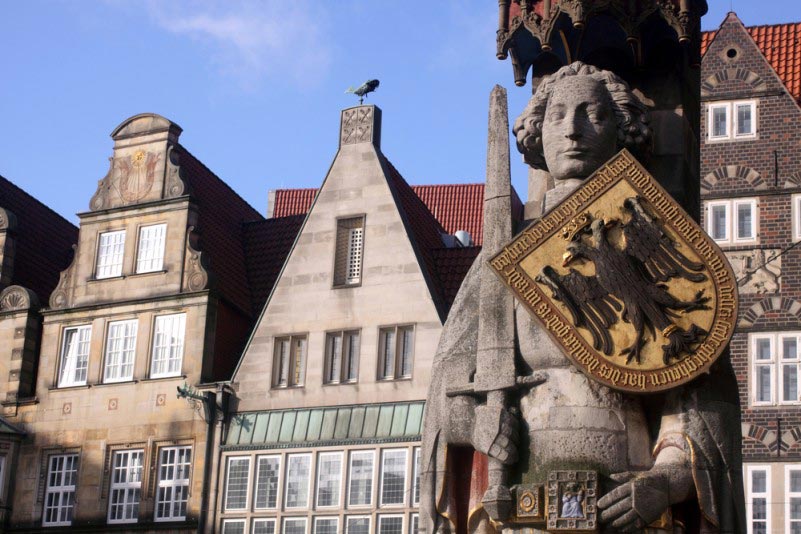 Bremen Roland : Statue of Roland in the market square of Bremen, Germany

Bremen Roland is a famous statue of Roland in the market square, or Rathausplatz, of Bremen, Germany. Roland was a knight of the first Holy Roman Emperor Charlemagne, and a hero of the Battle of Roncevaux Pass, in which he died. Roland became a paladin of Charlemagne’s court, one of 12 warriors found in French literature’s “Matter of France.”

Roland stands in the center of the town, next to the town hall and the city cathedral. The statue depicts Roland as the protector of the city, as he valiantly holds a sword and a shield with the two-headed Imperial eagle, a symbol of Germany. The shield is inscribed with a declaration translating to: “I manifest your freedom, as granted to this city by Charlemagne and many other rulers. For this, be thankful to God, that is my counsel.”

The Bremen Roland statue is a symbol for freedom and market rights, thus his location is adjacent to the marketplace. Though there are other similar Roland statues around Germany, the Bremen statue became a UNESCO World Heritage Site because of the exemplary style of the earliest of these statues.

The dress of the young man portrayed in the statue along with long wavy hair is reminiscent of the 15th century fashion. A lute-playing angel rests on the catch of his belt. Roland’s facing the cathedral, the seat of the archbishop has been an issue of dispute for centuries. It is because Ronald became the first Holy Roman Emperor over Bremen and symbolically challenged the clergy.

Where is Bremen Roland ?

The statue of Roland is located in Bremen which is in northwest Germany. Bremen is home to an international airport and a strong network of public transportation, which includes street trains (S-Bahn) around town and to nearby areas.