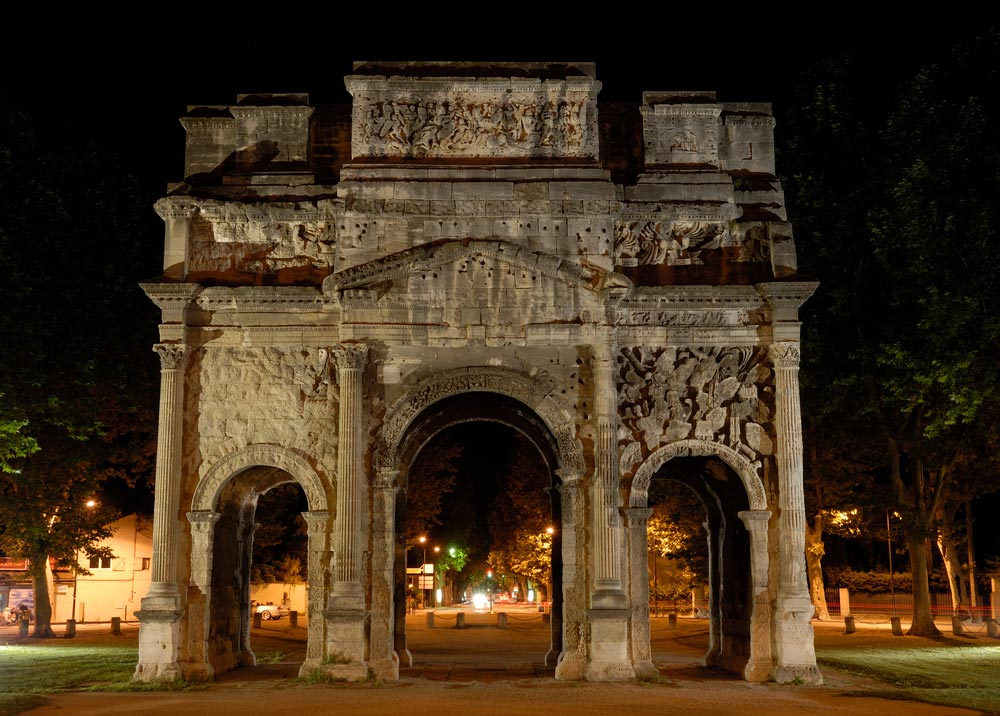 The oldest surviving triple-arched Roman triumphal arch is the Arch of Orange, France. Originally constructed between 10 and 27 AD, during the reign of the first Roman emperor, Augustus, the arch commemorated the Gallic Wars. The arch was dedicated to Tiberius in 27 AD, in commemoration of his victories.

A triumphal arch is an ancient Roman architectural structure consisting of two columns, connected from above by an archway. Arches were placed over roads or walkways. The Arch of Orange is situated along via Agrippa, and once made up part of the city’s defensive walls during the Middle Ages. Arches were constructed to commemorate important events including military achievements, like conquering a new city. A Roman triumph was a public ceremony or religious rite, granted by the Senate, celebrating military achievements, especially to applaud the military commander.

The Triumphal Arch of Orange features three arches – a larger center arch with a narrower and shorter arch on either side of the main arch. This atypical style was later used in Rome’s Arch of Constantine and Arch of Septimus Severus. The facades of the Arch of Orange are decorated with Corinthian columns, and embellished with reliefs depicting scenes of battle. Military themes portrayed include a Roman battle against the Germanics and Gauls, and a shield of Leggio II (the Second Legion) Augusta is also represented. The northern facade once held a bronze inscription, but this was lost at some point in history and historians have yet to decipher what it once said. Restoration work was taken on the arch in the 1850s.

Where is Triumphal Arch of Orange?

Orange is accessible at the Gare d’Orange train station, with trains from Arles, Avignon, Montelemar, Valence, and Lyon.

When to Visit Triumphal Arch of Orange

The city of Orange is located inland, but it is not far from the French Riviera. The region features mild weather that is warm and mostly dry year-round. Spring brings festivals and plenty of sunshine, as well as many blooming flowers. Late summer, from July through August is the busiest time in the region, and is recommended to avoid these months. Autumn is another good time to visit Orange and the region of Southern France. Winter, while it can still be quite beautiful in the region, is not the recommended time to visit Orange, as roads and some amenities close for the season.

The site itself does not close and there is no entrance fee, as it is located in a public park.

More about Triumphal Arch of Orange

Nearby Attraction of Triumphal Arch of Orange