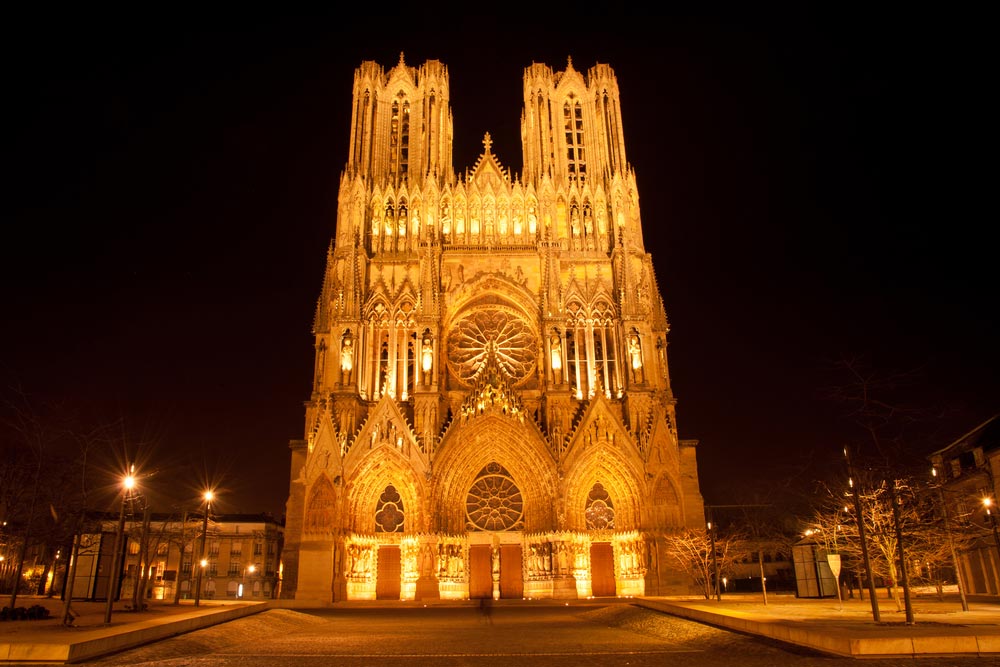 Notre-Dame de Reims (Our Lady of Reims) – The cathedral of Reims, France.

Notre-Dame de Reims (Our Lady of Reims), is the cathedral of Reims, France. The seat of the town’s Archdiocese, and for a time a place of coronation of French kings, Reims Cathedral is a remarkable work of Gothic architecture and art. Visitors can climb the Cathedral’s towers to take in the artistic masterpiece from above for better views of the sculptures, gilding details, and architecture. The UNESCO World Heritage Site includes the Palais of Tau and the Abbey of Saint Remi.

Before the current cathedral was built, a Carolingian basilica once stood on the grounds, though it burnt to the ground in a fire around 1210. That church was likely constructed over the ruins from ancient Roman baths.

The cathedral was reconstructed and drastically expanded during the 13th century, in order to better accommodate large crowds who attended royal coronations. A 1233 revolt over taxation and legal issues set the cathedral’s construction back a few years, resuming in 1236 after troubles were resolved with mediation through the King and the Pope. Construction continued in various phases over the cathedral, even into the 14th century.

The cathedral was designed in the classical Gothic style architecture, featuring a façade decorated with many intricate sculptural details. The statues on the façade include local bishops, prophets, apostles, and Jesus, and a scene of Crowning of the Virgin. The scene of the Visitation includes the figure of Elizabeth.

Inside, the cathedral was adorned with tapestries, including a special one representing the life of Mary. This and other works of art, are housed in the Palace of Tau, along with the treasury with rare and unique objects, like Sainte Ampoule, the holy flask. The traditional Gothic style is lightened using structural changes, such as more wall openings and more natural light, which shines through the detailed stained glass, created by Marc Chagall.

The neighboring abbey features a 9th century nave, containing the remains of Archbishop St. Remi, who died in 533. Reims was once an important Christian city, home to many important archbishops including Remi, the most famous of them who was known for the baptism of Clovis.

Admission charges are 7.50 € for adults. Minors and people within the 18-25 age group are freely admitted.

Where is Reims Cathedral ?

Reims Cathedral is located in the city of Reims, in France’s Champagne-Ardenne region, about 129 kilometers (80 miles) to the east of Paris. There are two train stations in Reims – Gare de Reims, which is a major transportation hub, and Gare de Champagne-Ardenne, just outside the city. The latter features high-speed connections to Paris and other major French cities. Charles De Gaulle airport is only about half an hour away.

Reims is beautiful year round. Summers are warm and beautiful, but can be crowded with tourists. A major summer solstice music festival takes place in Reims every year. Bastille day is another great day to spend in France, and also occurs during the summer season. Fall and spring are some of the best times to visit Reims, as wine is very important to the region and spring marks the start of the season. Visiting hours are from 0730 hours to 1930 hours daily.

Nearby attractions: Palace of Tau, Abbey of Saint-Remi, Eiffel Tower