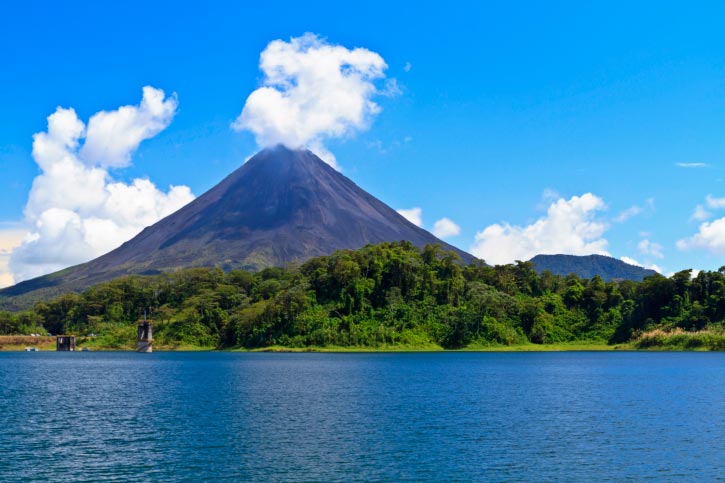 This Central American country has acquired its fame because of  having some lovely sand beaches. This small and beautiful gift of South America to the world possess everything that a tourist want while spending vacations. Having its capital in San Jose this place encourage eco-tourism to a large extent. Covering an area of only 51,000 sq km it is one of the smallest countries of the world. The population of the Democratic republic of Costa Rica comprises of Roman Catholic, Protestant, and others.

Costa Rica can be an explorer’s delight as it has some active volcanoes, rain forests, and succulent beaches. Tamarindo is the most visited place of Costa Rica owing to its lovely beaches. Tapanti National Park and  Arenal Volcano are some of the frequently visited spots of the tourists. Categorically divided into four seasons, climate of this Spanish speaking country is thrilling as the temperature generally hovers around twenties throughout the year.

As Costa Rica is considered as a peaceful country, you will rarely face any difficult circumstances. People are courteous, hospitable and helpful, which makes you feel at home. Some native dishes like Gallo Pinto, Casado and many more is sure to tickle our taste buds, but out of all the most sought after dish is Salsa Lizano. Reaching Costa Rica is not a big deal as the Juan Santamaria Airport connects to the capital city and the cities like Alajuela and Heredia. The Daniel Oduber Quiros International Airport also provides quantum facilities for the tourists. Bus service is an efficient mode of transport from the neighboring countries like Panama, Nicaragua, Honduras, etc. After reaching Costa Rica ample number of Rental Car, Taxi, and Public Buses are available to reach you to your preferred destination.

There are numerous options for the visitors to arrive at Costa Rica from all corners of the world. The most popular and frequently opted mode is airways as Costa Rica is linked with most of the important cities of the world and a host of international airlines operate regular flights to and from Costa Rica. In absence of any official Airlines of Costa Rica a number of international airlines like United Airlines, Air Canada, Air France, Alitalia, American Airlines, British Airways, Condor, Continental Airlines, Copa Airlines, Cubana de Aviacion, Delta Air Lines, Grupo Taca, Iberia, Lufthansa, Martinair, Mexicana de Aviación and US Airways operate regular direct as well as connected flights to Costa Rica from all round the world.

You may also opt for car travel as the Interamericana or the Panamerican Highway runs through Costa Rica and it is the main point to enter the country by car. Visitors from the neighboring countries of Panama, Nicaragua, Honduras, El Salvador, and Guatemala can also avail the extensive net work of bus system. Another less likely option to reach Costa Rica is to opt for boat transfers from Bocas del Toro in Panamá and the boats are usually available in the morning.

The spectacular country of Costa Rica includes a sparkling array of attractions and tourists from remote corners of the world assemble here to explore them. You may travel from one city to another city is by air ways and there are two primary domestic airlines operating in Costa Rica, Sansa and Travel Air. Both these airlines offer regular scheduled flights and help tourists to travel in various parts of the country.

Particularly, the metropolitans of Costa Rica are well served by taxis and taxis are red in color. The taxis are not usually provided with meters and the charge is based on distance traveled so it is advisable for the tourists to settle down on the cost before they hire a taxi. Due to its vast road system almost all the regions of Costa Rica are connected via road and presently several transportation companies have acquired more modern, air conditioned buses for use on long trips and these long route buses are gaining increasing popularity among the travelers.

The beautiful country of Costa Rica is teemed with a sizzling array of options for spending a fantastic time. Be it shopping or chilling out in a rocking nightclub or simply participating in a host of thrilling out door activities, Costa Rica accommodates your every choice and wish.

The capital of Costa Rica, San Jose is the best place to get involved in a vigorous shopping spree and here you will come across numerous small gift stores which are best for buying some nice trendy souvenirs for your near and dear ones. You may shop for good quality wooden and leather handicrafts that are a specialty of Costa Rica.

Most of the Souvenir stores usually give discounts on cash payment and both the outdoor market near the Museo Nacional and neighborhood of Moravia in the northern part of the city are the hub of innumerable souvenir shops.

For those travelers who are interested in adventure sports, Costa Rica offers opportunities to participate in a host of thrilling out door activities and adventure sports like wind surfing, mountain biking, horseback riding, rafting, fishing, scuba diving, kayaking, and boating.