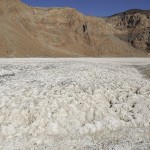 Natron deposits in the Era Kohor crater on Emi Koussi

Perpetuated by the breathtaking and somewhat bizarre landscape of the Tibesti Mountains, Emi Koussi is home to extinct volcanic peaks and arguably the most isolated human settlements on earth. Embark on the Saharan journey where new encounters, landscapes, and cultures await. Take a camel ride through the abyss of Koboué, delve into prehistoric times to see ancient rock paintings, and sail on the vast dunes of Erg du Djourab. Chad has opened its doors once again to this untouched region, giving you access to its geological paradise of canyons, gueltas, sea arches, and oases.

Emi Koussi is made of rocks from the the geological epoch of Holocene (some 11,500 years ago) when the glaciers began to retreat. It is a part of ‘Tibesti’ mountain range, which means “place where the mountain people live,” This region has been the territory of the Tubu people.

Things to Do in Emi Koussi

Given the far-flung location, unpredictable environment, and harsh weather conditions, this region doesn’t seem tempting enough in the beginning, still, there are plenty of activities to enjoy around the mountain.

Outdoor Thrills – Witness the camel racing put on by the Tubu tribes or go for a challenging mountain biking. The varied landscape of Tibesti massif and the Sahara provides ample opportunities for hiking and trekking. While, the trail to hike Emi Koussi is 108 miles long, the legendary 88-mile long Ennedi Eternel trail, with moderate difficulty, is the most famous in the country. The entire ascent to Emi Koussi, around the Era Kohor, and finally on to Yi Yerra hot springs, normally takes three days. For rock climbing enthusiasts, the Ennedi Range offers many routes to explore.

Lakes of Ounianga – These lakes in the heart of Sahara are like oases in a desert. A UNESCO World Heritage Site since 2012, it comprises overall 18 interconnected lakes. These remarkable lakes are separated in two groups and are 40 km apart. While Ounianga Kebir has four lakes, Ounianga Serir has 14. Lake Teli and Lake Yoan are two of the biggest lakes.

Guelta de Archeï – It is a major watering ground for numerous herd of camels. The area is bounded by high walls, decorated with cave paintings, surrounded by palm trees, and well concealed in the arid landscape.

Wildlife – Tibesti range is inhabited by Rhim gazelle, Addax, Fennec fox, and Barbary sheep – largest in the world. To encounter larger animals in abundance, go on game viewing safaris to the Zakouma National Park, which is home to flocks of elephants, lions, and giraffes.

Emi Koussi lies at the southeast end of the Tibesti mountains in the Borkou region of northern Chad.

By Air – N’Djamena International Airport is the intercontinental gateway to the north Saharan region in Chad. It is served by major airlines from countries in north Africa and Middle-east. Moreover, Faya-Largeau Airport is a regional and the closest airport to Emi Koussi.

By Road – Transport infrastructure is generally poor, especially in the northern region of the country. The only reliable public transportation available is cargo trucks, which depart from N’Djamena – the capital of Chad. The city is located 600 miles south of Emi Koussi.

It’s best to rent a caravan if you prefer to stay in your comfort zone during the excursions in the desert. Tour operators usually provide accommodations on request, however, climbers and adventurers can find shelter anywhere on the mountain. To find luxurious hotels, you must head to N’Djamena where Le Meridien Chari, Kempinski Hotel N’Djamena Chad, and Toumai Hotel.

If you are not too keen on sitting on a mat and eating out with nomadic tribes near the mountain, then you can always go for fine dining in the restaurants of N’Djamena. Le Carnivore, Cote Jardin, Le Resto, Laya Lina, and Restaurant Alibaba are best in the city to feast on Chadian and Lebanese cuisine.

The ideal time to visit Chad is between December and February. Although the weather is windy, the day temperatures are relatively lower.