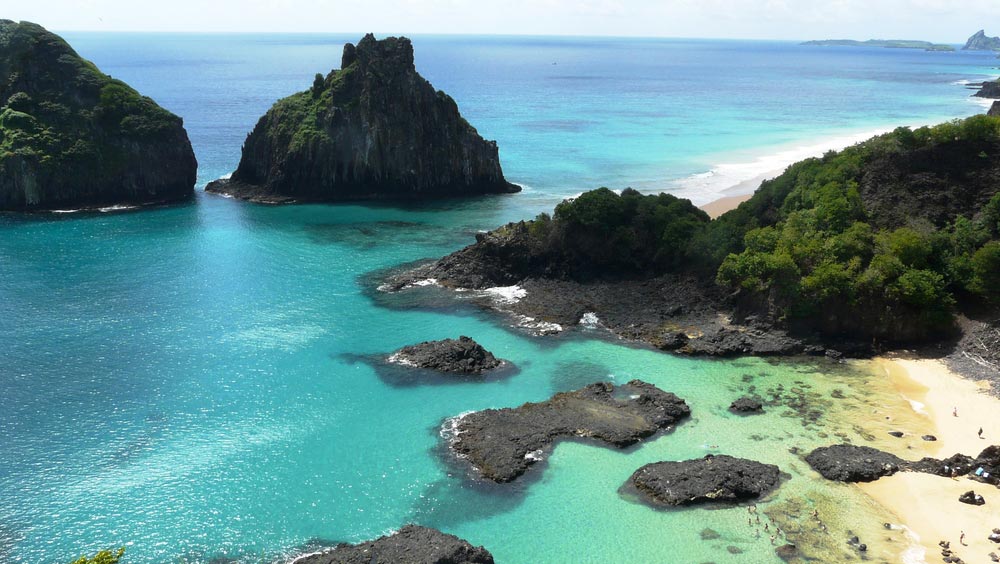 The Islands of Noronha are a part of the Southern Atlantic submarine ridge. Due to its pristine beaches, Noronha is frequently visited by tourists. The tranquil aura and the sand lulled to sleep by turquoise ocean, makes it a favorite place for honeymoon couples. Owing to its spectacular beauty, these islands are also ranked among the romantic wedding destinations. Crystalline water with colorful marine life makes it one of the stunning places in Brazil. You would love to watch dolphins playing in the ocean.

Delving into the history of the archipelago, you would see that this group of islands was discovered in the year 1500 by Juan de La Cosa, a Spanish cartographer who documented it in a nautical chart. Its official discovery was done by navigator Américo Vespúcio in 1503.

Where is Fernando de Noronha?

Fernando de Noronha is an archipelago located 545 km off the coast of Pernambuco (a Brazilian State). You may reach the island via airways.

How to Reach Fernando de Noronha?

The Fernando De Noronha Airport is centrally located in the heart of the island of Noronha. Several flights from Natal and Recife connect to various cities of the island. You may also arrive Noronha by sea. Private boats are available to reach the island (but you need to pay an anchor tax to anchor your boat in Noronha). You may also choose to travel via cruise or ferry. Many cruises stop in Natal, Recife, Noronha, and Fortaleza.

Noronha island has an equatorial climate. The islands experience rainfall from March to November.

Things to Do & Accommodations

The island offers numerous entertainment options. Various activities that you would enjoy here include fishing, kite surfing, diving, scuba diving, sailing, and snorkeling. Other things to do on the island are backpacking, and camping. As there is scarcity of resources on the island, there are a limited number of accommodation facilities. One of the luxury hotels in the island is Maravilha. You need to reserve the rooms in these hotels in advance.

Note : The ocean surrounding this eco-wonderland also has sharks and stingrays, which make it unsafe for exploring the ocean alone.

Which trail routes are there in the Marine Reserve?

Which trails are provided in the protected area?

Costa Azul, Jardim Elizabeth, and Esmeralda Coast are the trails provided in the protected area.

Which marine animals are found in the water surrounding these islands?