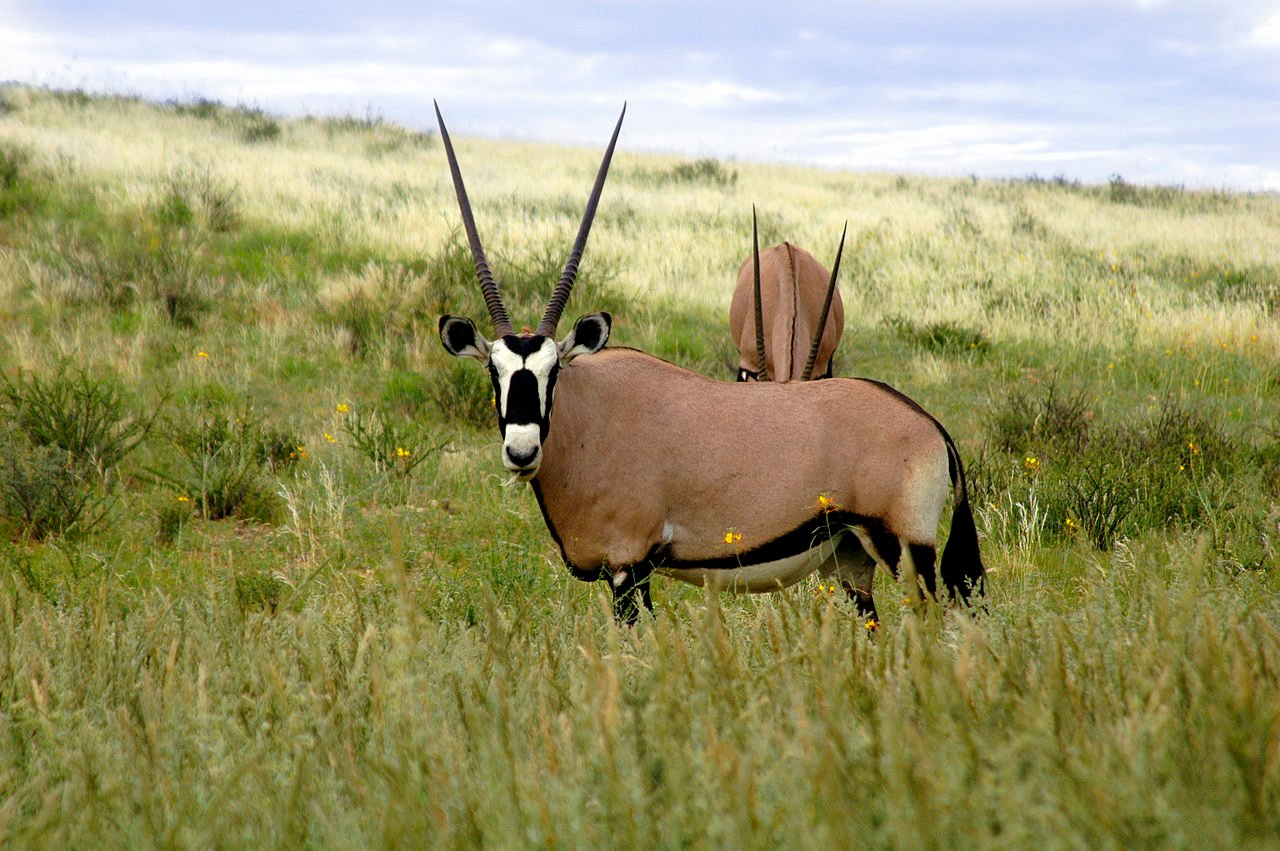 Gemsbok at the Kgalagadi Transfrontier Park

The Kgalagadi Transfrontier Park is a world renowned bi-national park that occupies a section of the border area of two neighboring countries in Africa – Botswana and South Africa. This first of its kind wildlife protected area in Africa, not only serves as a wildlife sanctuary, but is also a symbol of peace and goodwill between the two nations. Two former parks – the 28,400 sq km Mabuasehube-Gemsbok National Park in south-west Botswana, and the 9,591 sq km Kalahari Gemsbok National Park in northern South Africa – were amalgamated to form the world’s first transfrontier wilderness collaboration.

The landscape of the Kgalagadi Transfrontier Park is rather unlike most national parks in the world. It is characterized by red to yellow to gray sand dunes, prickly trees, dry river valleys, and a large number of animals migrating every few months to find new sources of water and food. The park is famous for its predator species, like the black-maned lion, hyena, bat-eared fox, leopard, jackal and cheetah, and the desert antelopes known as gemsbok. Among other wildlife attractions, Kgalagadi is also known for its meerkat or suricate, honey badger, and pangolin, and about 280 bird species, including lappet-faced vulture, bateleur, black-chested snake eagle, pygmy falcon, and pale chanting goshawk. Many of the birds are reportedly migratory and nomadic in behavior. So, you might find larks and canaries after abundant rainfall and Ludwig’s bustard during summer.

While on a Kgalagadi Transfrontier Park tour, visitors can roam around the wilderness in a 4 x 4 motor vehicle enjoying the panoramic views of the Kalahari Desert and sighting animals, reptiles, and birds on the way. A number of designated trails are suggested by the authorities to help tourists get the most out of the Kgalagadi Transfrontier Park safari. These include:

In addition to the vehicle safaris, there are a number of campsites in Kgalagadi, where tourists can camp for a few days. Camps in the Botswana side of the park include those in Lesholoago, Monamodi, Mabuasehube, Bosobogolo, Rooiputs, and Mpaathutlwa. On the South African side, visitors can stay in rest camps in Twee Rivieren, Nossob, and Mata-Mata, or they may also avail tent camps along the wilderness trails.

Where is Kgalagadi Transfrontier Park?

The Kgalagadi Transfrontier Park is located on the border between two countries and sprawls into both. Its northern part lies in Botswana and its southern part lies in South Africa. It also allows entry from both sides – Twee Rivieren Gate (South Africa), and Two Rivers, Kaa, and Mabuasehube gates (Botswana). There is another gate, Mata-Mata Gate that is used by the small number of visitors entering from southeast Namibia.

The nearest international airport to Kgalagadi is in Gaborone, the Sir Seretse Khama International Airport, which is close to the Mabuasehube Gate (530 km; takes about 12 hours). Some safari tours to Kgalagadi also begin from Maun (797 km) and Kasana. The nearest entrance will then be the Kaa Gate. You can also take a charter flight to the airstrips in Ghanzi (376 km) and Tsabong (115 km), from where you can drive through Kaa to enter the Park.

O.R. Tambo International Airport in Johannesburg is the nearest international airport to Kgalagadi if you wish to visit the Park through South Africa. It is about 904 km away from the park. Visitors usually fly into Upington Domestic Airport to start their journey towards the Kgalagadi Transfrontier Park. You will then take the road to the Twee Rivieren Gate, which is about 265 km away. Air charters are another option to make the journey more picturesque and comfortable. Landing runways are located in the Nossob Camp and Twee Rivieren.

The Kgalagadi Transfrontier Park has an arid climate. Its summers (October to April) are very hot with surface temperature reaching 70 degrees Celsius and air temperature being about 42 degrees Celsius. The Park also experiences rains during summer, between November and February. Rain is quite irregular and is characterized by thunderstorms and strong winds. The winter season starts in May and ends in September. Weather during this time is warm during the day, but frosty at night, when the temperature may drop below zero degree Celsius.

The best time to visit is between March and May when the rains have ended and the weather is milder.

The visiting hours in Kgalagadi Transfrontier Park vary for almost every month. Timings, although, are the same for the gates in both the countries.

Tickets for entering the Kgalagadi Transfrontier Park are available in the respective countries through which the visitor wishes to enter.

If you wish to enter from Botswana, you can buy the tickets from the Parks and Reserves Reservation Offices in Maun and Gaborone. Ticket charges are calculated according to the number of days one wishes to stay in the park, and vary for adults (20 pula per adult) and children (between ages 2 and 15) (10 pula per child).

If you wish to enter from South Africa, you can buy the tickets online, or from booking offices in Pretoria, Durban, Cape Town, Northcliff, Port Elizabeth, and other cities. Tariff charges for foreign visitors are charged as the Daily Conservation Fee – 248 rand per adult and 124 rand per child. Charges are for each day.

Which are the places of interest around the Kgalagadi Transfrontier Park?

What are the coordinates of the Kgalagadi Transfrontier Park?