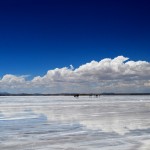 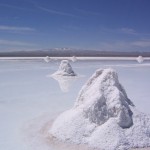 Separated by mighty skies and blinding white surface, the otherworldly horizons of this salt flat never seems to end. Piles of accumulated salt and miles of unspoiled terrain are the highlights of world’s largest salt flats – Salar de Uyuni. This expansive moon-like landscape is enclosed by volcanic wastelands, high-altitude lakes, thermal springs and geysers, and snow-capped peaks of the Andes.

This area came into existence as a result of variation in surface elevation of prehistoric lakes. Altiplano plateau, the second largest mountain plateau in the world, is a region where the Andes mountain range is at its widest. As the water of the lakes evaporated, it formed a flat landscape of salt.

Things to Do in Salar de Uyuni

Organized Tours – The only way to travel in salt flats is to join an organized tour run by numerous local agencies. Though it may be a test of endurance, it allows you to organize your thoughts and bargain for the best possible tour. From single day tours to multiple-day (3-4 days) tours are available that provide adequate food, basic accommodation, and transportation. Round-trip tours begin from Uyuni and Tupiza in 4×4 vehicles and up to 6 people in one group are permitted.

Isla Incahausi – This coral island features 18-m-tall cacti and some fragile plants. Those who stop by this symbolic landmark are astonished by the rocky hill that sits on top of an ancient volcano. Isla del Pescado is a neighboring island and also called a “Fish Island” due to its fish-shaped view from a distance.

Lakes & Hot Springs – Laguna Verde is famous for its hot springs and scenic views of the Andes. Take a dip to relax in turquoise waters or enjoy the spectacular sunsets when you are exploring the flats. Licancabur, one of the many volcanoes in southwest Bolivia, lies adjacent to this green lake. It is also an ideal solitary spot for camping.

Flora and Fauna – Although this region receives negligible rainfall throughout the year, it supports some vegetation and wildlife. Salar de Uyuni is inhabited by James’s Flamingo, Andean Flamingo, Culpeo, Andean Goose, and Bolivian Vizcacha.

Where is Salar de Uyun ?

It is located near the crest of the Andes, in the Potosi and Oruro states in southeast Bolivia.

By Road – Uyuni, the gateway to Salar de Uyuni, is connected to Sucre, the capital of Bolivia, and nearby cities.

Travelers who wish to explore Salar de Uyuni by themselves can find accommodations in Uyuni town. In Uyuni, you can choose from Kory Wasy Hotel, Girsoles, Tonito Hotel, Hotel Jumari, and Hotel Avenida for a comfortable stay.

For Bolivian and South American cuisine, you can please your taste buds at Lithium Club, Kactus, and Wiphala Club. Feast on the traditional dishes of Locro and Pique with a glass of Singani (a brandy produced only in Bolivia). Minuteman Pizza, Sal Negra, La Loco, Arco Iris, and Ristorante Italia are other famous eateries in Uyuni town.

November to March is the best time of the year to travel as these flats are filled with water. Weather in Salar de Uyuni is relatively less humid and stable, although night temperatures are always cold.