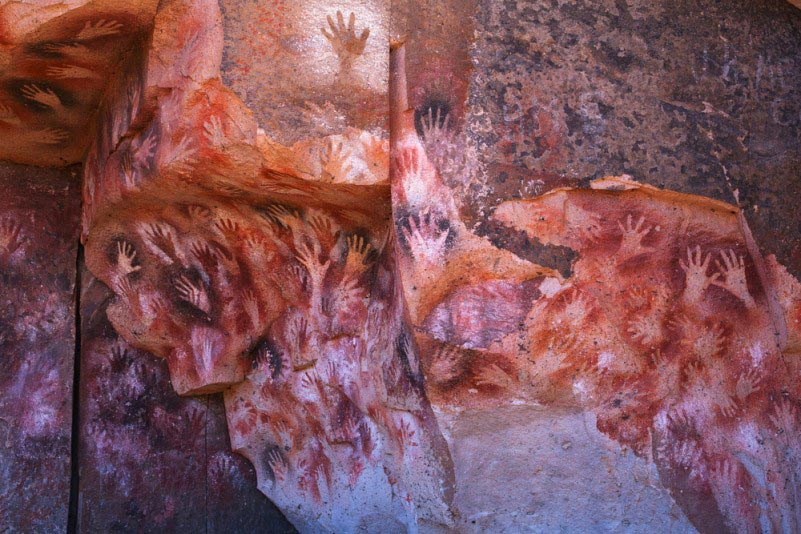 Deep within the silent valley of Pinturas River of Argentine Patagonia lies Cueva de las Manos or Cave of the Hands. This cave is a unique testimony to the culture of indigenous people and it creates a vivid visual of native tribes hunched around a fire, preparing their guanaco and portraying the stories of the day on the walls. The cave paintings tell you that they were not merely a daily journal, but an effective (almost immortal) medium of communicating thoughts to future generations!

The cave paintings, believed to have been created around 9,000 to 13,000 years ago, were manifestations of artistic skills of the hunters and gatherers who resided in Patagonia. If history is to be believed, those people used pipes carved from bones to spray paint the cave walls. It is assumed that they used their hands as stencils to create hundreds of silhouettes in varying shades of red, purple, yellow, and brown. The last wave of hunters may have belonged to the Tehuelche people.

Things to Do Near Cueva de las Manos

Posadas Lake – Bordered by southern Andes glaciers, the town of Lago Posadas and the region are accessible by travelers via Ruta 40. This region is popular destination for trout and salmonidae fishing, trekking, and kayaking.

Los Glaciares National Park – Located in Austral Andes, this area of outstanding universal value is known for rugged mountains and glacial lakes. Thus, it has joined the league of UNESCO World Heritage Sites. Glacier Perito Moreno and Monte Fitz Roy are the highlights of this park. Adventure-seekers gather here for mountaineering, climbing, and trekking.

District of Río Mayo – The town, which is crossed by the river of same name, is famous for excursions like hiking, horse riding, and photography tours.

Cuevos de las Manos is situated in the valley of the Pinturas River in Patagonia.

By Road – The cave is accessible via a gravel road that branches out from Ruta (National Route) 40 near Bajo Caracoles.

Argentinian cuisine is famous for Milanesa, Chimichurri Sauce, and Dulce de Leche. In Perito Moreno, you can dine at Kimey, Belgrano, and Hotel y Restaurant Americano.

Temperate climate makes this a year-round destination. However, spring and summer (September through February) are the best seasons to visit the cave.