In the cold months of Christmas, when sheets of ice cover the streets and the lake is like a beautiful mirror on which you can walk, you know it is time to put on those ice skating shoes and glide like a swan across the ice skating rink in your city. However, not everyone is lucky enough to be living in a place that winter turns to ice-land. So, what do we do? Do we put all our ice skating dreams in the overhead cabin and forget about them? Not so fast. We have brought you a list of 5 places around the world that are very famous as outdoor ice skating destinations. So this Christmas, wish you Feliz Navidad and happy ice skating. Here is the list of famous ice skating rinks around the world: 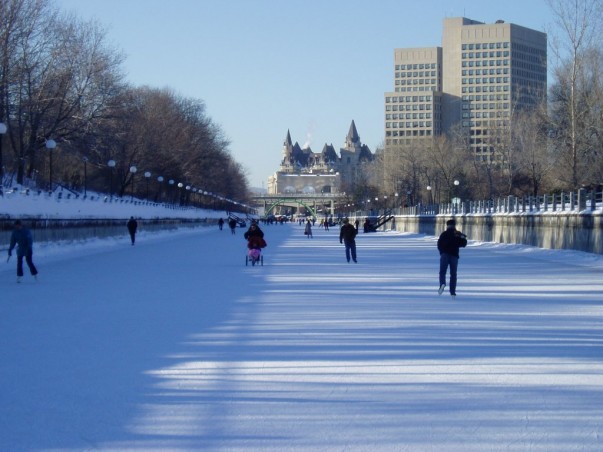 Rideau Canal is one of the world's largest ice skating rink

Now where do I begin about the Rideau Canal Skateway in Ottawa, Canada. The famous Skateway is not only the world's largest ice skating rink but has also been declared a UNESCO world Heritage site. If there is one event that the Rideau Canal Skateway is famous for it is the Winterlude. The Winterlude starts towards the end of January and extends well into the middle of February. The ice sculpture competition is a major attraction for tourists the world over. The Winterlude receives a footfall of hundreds of thousands of visitors every year.

I guess I have to take back my words. The Rideau Canal is as much a focal center of the Winterlude as the Winterlude is a highlight of the world's largest ice skating rink.

And the best part is the skating rink opens in January. So, you can celebrate Christmas and New Year's Eve with your family and friends and then take off to Ottawa for a nice spin in the ice. 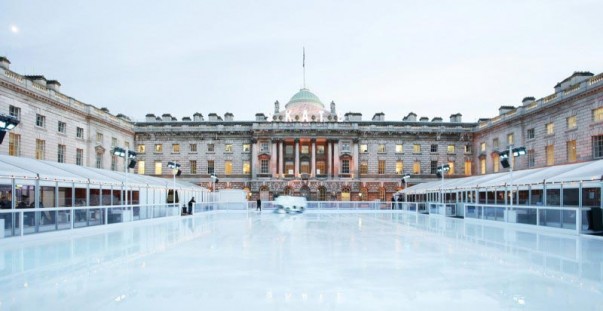 Want to give your toddler a chance to go ice skating with a penguin? Well, then enroll your child into the Penguin Club at Somerset House. Here your toddler, provided he is 8 years old, can skate with the help of a penguin stabilizer ( you really did not think I meant live penguins?) in the ice skating training rink. Little children look beautiful as they hobble about practicing their first lessons on the rink- like colorful penguins actually.

This rink has been called 'London's favorite ice skating rink' and 'The coolest rink of all' by the leading dailies in London for a reason. The Somerset House offers a range of experience in dining that come at an additional charge with skating. So, once you have shaken off the cold after a couple of rounds in the ice skating rink you sit down to a perfect English afternoon tea. And if you really plan to splurge this Christmas to impress your sweetheart sign up for the Skate and the Savoy for a memorable stay, dinner and skating experience.

From 18th November to 23rd December 2014, Somerset House will celebrate 'Glad Tidings Tuesday”- a nice way of warming up to the Christmas season that is already beginning in full swing. Visitors will be greeted by choirs singing Christmas carols. The music at the skating rink will be Christmas anthems. Fortnum & Mason has introduced personalized gift hampers specially for the sake of Christmas. Food tasting for cutomers will be held. And the best part is- you can 'skate while you wait'.

A glimpse into what skating at Somerset House will be like 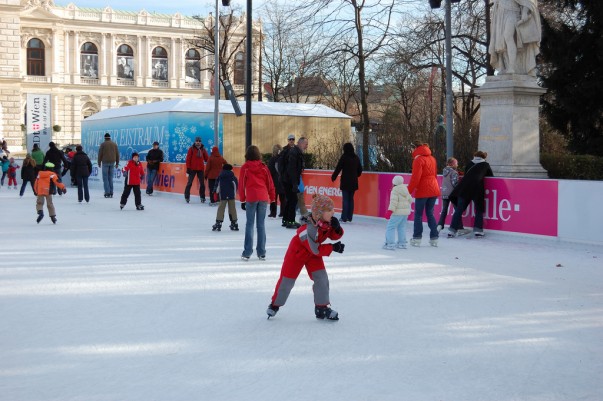 Vienna Ice Dream is a visual feast for spectators.

Every once in a while you arrive at a place you would like to call paradise. If you had reached Vienna on 24 January this year for the Wiener Eistraum, you would have arrived at one. 6000 square meters of ice skating area- all brightly lit up with lights in the new year cheer- a 750 m long ice skating trail through the park- and a brightly lit up city hall in the background. On top of it, you get a variety of regional cuisine served at stalls around the skating rink. Paradise is free, you say? Well, here's the good news. The Wiener Eistraum is free to skaters on its opening and closing days. So, this year on 24 January and on 9 March entry to this gala ice skating event was absolutely free to everyone.

Not only were skaters delighted but it was also a visual feast for spectators.

And as for the food, well, all we can say is that with the variety of sweets and drinks that are on offer- you will surely return home a little tipsier, a little fuller and a lot more happier. 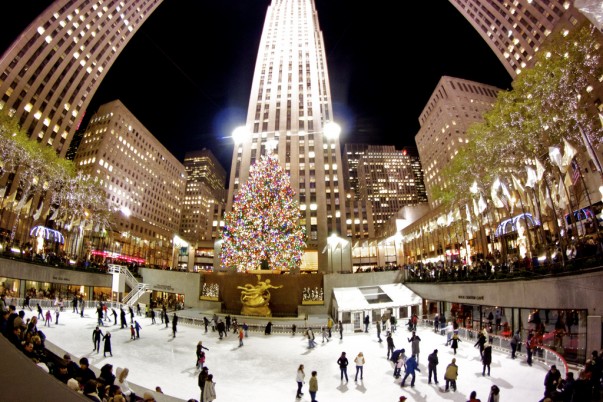 The Rockefeller Center  during Christmas

Now, this is a small skating rink- 122 ft long and 59 ft wide. It mostly remains filled to capacity- a small number of 150 skaters. But being in the heart of New York, it is full of life all the time. And this is one place where it is (arguably)the spectators have more fun. The opening day of skating is celebrated mostly with a performance by the famous Rockettes group. The synchronized performance by the famous Rockettes group has many fans, and to watch the Rockettes do their signature eye high leg kick on the glistening white of the Rockefeller ice rink is the cherry on the cake.

To sum it up, the Rink at the Rockefeller center is a place for some top-line fun and entertainment in Manhattan, a city already famous for its high end lifestyle.

A very good view of skaters at the Rockefeller Ice Rink 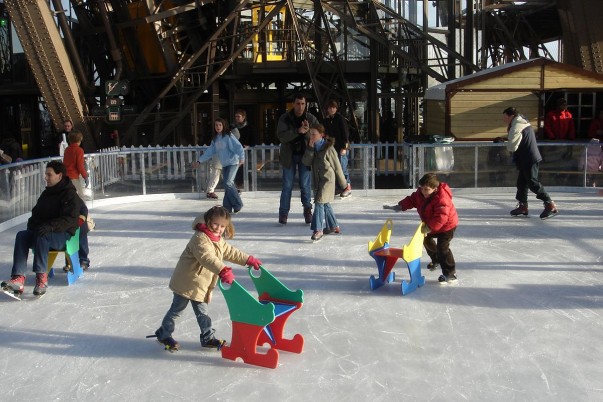 Ice rink at the 1st floor of  Eiffel Tower

Yes, you heard it right. There is an ice skating rink 'on' the Eiffel Tower. It is like a very small island of ice supported by strong metal bars of the Eiffel Tower. And at night, this small island becomes magical for all those who climb up for the fun. The ice rink on the Eiffel tower measuring only 200 square meters in area and at a height of 187 feet above Paris, claims to be the first interactive ice rink. When you ski on the rink the colorful projections on the ice floor change patterns in tune with your movements. So, practice your moves at home before you reach there if you wish to glide along the floor feeling like Natalie Portman in a mini opera. But make sure, you do not 'charge into' any other skater in your trance since it is strictly not allowed.

Watch these little ones Ice Skate at the Eiffel Tower

However, if you are more inspired by the idea of looking at the Eiffel Tower while you skate, then opt for the ice rink at Trocadero near the Christmas market. This is also the place where you can watch serious skaters do some pretty cool ice skating.

Latest news: The ice skating rink was closed for two years due to modernization work going on at Eiffel Towers. Good news is that it is back this year, and already operational. It is also equipped with a nice little bar selling mulled wine and hot chocolate. The rink will remain open from 8 December 2014 through 15 February 2015.