Boron and Visarjan - Bidding Adieu to the Goddess Durga 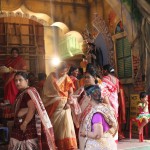 Married women all lined up to bid adieu to the Goddess 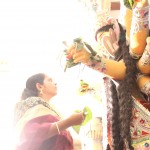 A lady cleans the Goddess’s face with betel leaves 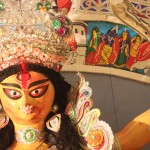 Smeared in red, the idol appears to blaze with life 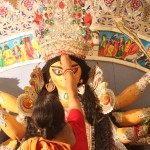 May you have a long blessed married life 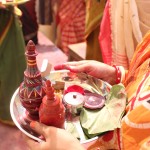 Vermillion, sweets and betel leaves- all to bid farewell 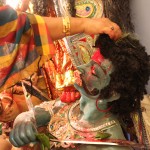 Even the demon receives his share of sweets, vermillion and betel leaves 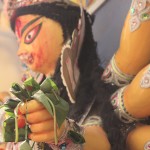 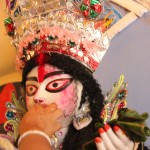 A devotee lovingly feeds sweets to the departing goddess 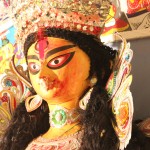 The Goddess looks satiated after a feast of sweets 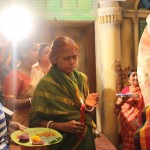 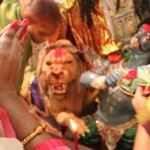 Offering prayers to the deity 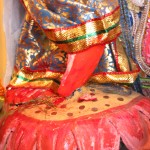 Bermuda grass, considered sacred in India, is offeerd to the deity 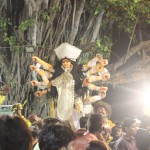 A final look at the all powerful mother 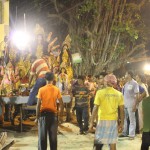 A smaller idol is relatively easy for the coolies to carry 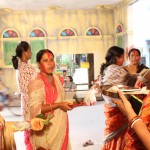 Women talk to one another as they perform the rituals 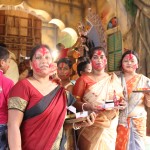 After the sindur khela 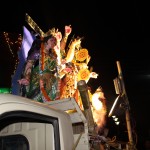 The deity atop a lorry on her way to immersion 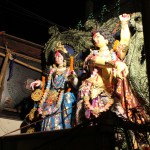 Durga’s children karthik and Saraswati, accompant their mother to the Ganges 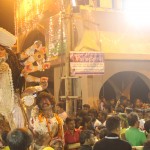 Being carried to the river on the shoulders of devotees 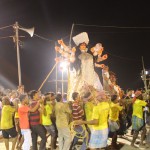 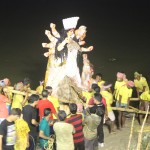 Led to the water for immersion 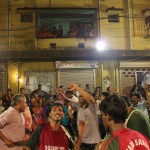 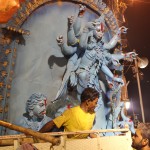 Another idol on the way to immersion

BORON - Farewell to the Goddess

We bid the Goddess farewell by welcoming her, on her way out, to return again the following year. After all, she is a daughter and married now. Her pride may be hurt at being asked to leave her own father's house. Hence, the ceremony of 'boron' or 'welcome'. On the day of Dashami- the last day of the Durga Puja celebrations, all married women, wear a saree, shakha (conch bangles), apply sindoor (vermillion) on their forehead, and reach the neighborhood pandal to 'welcome' the Goddess for the following year. It is true she is a Godess. But now, as a married daughter saying her goodbyes, she is one of our own. Amidst the resounding sound of dhaak (a membranophone instrument popular during festive rituals), married women bid farewell to the Goddess and her children. They use a lighted candle or an earthen lamp to see her face, then apply vermillion on her as a mark of praying for her long married life, feed her sweets and clean her face with betel leaves.

In this coming together, the distinction between a goddess and a devotee is blurred. Durga now, is truly human.

Having said their last farewells, the women turn to each other and embrace one another (a ritual called kolakuli) - and apply vermillion to each other's foreheads and faces- a mark of solidarity that binds married women together. This is also an ice breaker for any new bride for whom this is a chance to make friends with the other women in the neighborhood.

Once the Boron ceremony and sindur khela (playing with vermillion) is over, the women return to their homes and touch the feet of elders. Men too do the same. Then it is time for sweets and refreshments. But for someone who has just bid farewell to the Goddess, the lively kohl-lined eyes of the Goddess keep coming to mind, and the heart feels heavy. The sweets are just a distraction to lighten up the mood.

VISARJAN - the immersion of the idol

Visarjan during Durga Puja is a sight that has to be seen to be believed. The hundreds of idols that had sat in the decorated marquees, are all making their way to the banks of the river Ganga or to the nearest pond or water body. Men, women, children- everyone is out on the streets-dancing-as they accompany the Goddess and her children, who are being carried to the waters on the shoulders of her devotees.

This carries on throughout the day, throughout the night and well into the next day. The sight of the giant idol carried over the shoulders of a sea of humanity, with every voice crying out, “Asche bochor abar hobe'' (this will happen again next year), and old and young-all dancing to the beats of the ubiquitous dhak- the spectacle creates a transcendental experience. The Visarjan or immersion of the idols, the gay abandon manifest in this community participation, is the final climax towards which all these days of festivities build up.

If you get a chance to stand on the banks of the Ganges in Kolkata, on the occasion of Dashami Visarjan, you can see hundreds of idols making their way to the river. All these idols had been created with different themes in mind. Hundreds of thousands had been spent on conceptualizing and building these idols and the marquees in which these idols had stood during the festival. But on the day of Vijaya Dashami, making their way to the river, they all look the same. With her hands and faces smeared with the sacred red powder, pushed towards the river on the shoulders of those who claim to love her the most, the powerful Durga appears very vulnerable- her face flushed and lips sealed.

Are her devotees aware of this? Is all this pandemonium a way of overlooking her pain? Or is it a way to tell the Goddess that she too is not spared from the poignancy of human existence- the pangs of betrayal and separation.

Bearers, who have been appointed for the purpose, carry the idols from the trucks to the river. Then, in a final display of ceremony, many bearers get together to swivel around with the idol, allowing the devotees who have thronged the riverbank to take one last long look at the Goddess.

And then slowly the idols are lowered one by one, to find their way through the water to their home in the Himalayas.