Home » 7 Most Beautiful Mosques Around the World

7 Most Beautiful Mosques Around the World

In Muslim tradition, mosques are sacred places where all followers of Islam come for worship and prayers. Since Islam is one of the most spread religions in the world, mosques are built everywhere across the globe, one more beautiful than the other. Beyond their stunning architecture, these constructions have fascinating stories, not to mention wonderful interiors – of course, if you are lucky enough to be a Muslim, since non-Muslims are not allowed to enter them all the time. If you plan to visit one of these dearest structures, here are 7 Most Beautiful Mosques around the world you should consider.

Al Haram is the most monumental mosque in the world, located in the city of Mecca, Saudi Arabia. Surrounding the Kaaba, one of Islam’s most sacred places, the Al Haram mosque is also the largest in the world, covering an area of 400,800 square meters of indoor and outdoor praying spaces, with a capacity of up to 4 million people. Established at the time of prophet Ibrahim, the Al Haram mosque allows both men and women to pray together, unlike most other mosques that are usually segregated. The mosque is opened to all visitors at any hour, and you should definitely consider visiting it during regular days, when no celebrations take place, unless you want it to be very crowded. 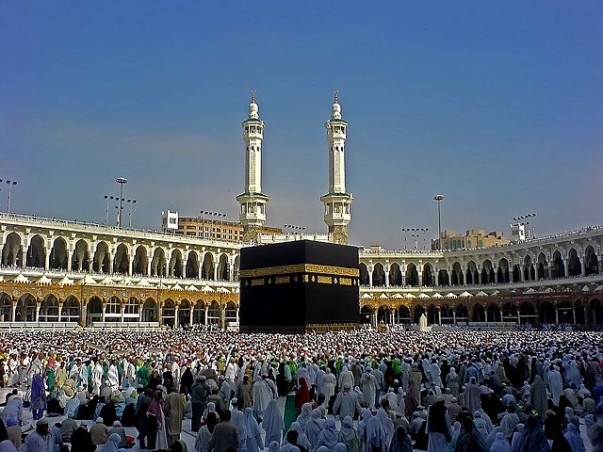 Located in Medina, Saudi Arabia, the Al-Masjid an-Nabawi mosque is extremely popular due to the fact that it was built by Prophet Mohammad. Al-Masjid an-Nabawi is the second largest mosque in the world, and also one of the holiest worship places for all Muslims in Medina. What makes this structure so special is the tomb of Prophet Mohammad, which is conveniently located in the center of the mosque, also called the “Green Dome.” The wooden cupola of the mosque has been built in 1279 over the tomb, and it was later reconditioned multiple times throughout the 15th century and once in 1817. If you plan to visit Al-Masjid an-Nabawi, consider doing this at night, when all lights and lamps are turned on. 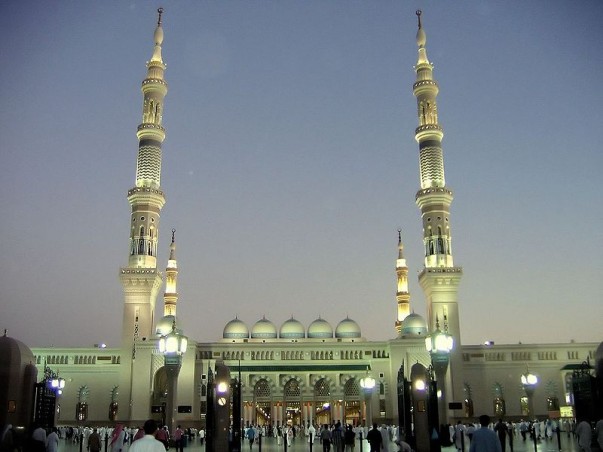 Built in Casablanca, Morocco, the Hassan II Mosque is the 7th largest  mosque in the world, and also the structure with the tallest minaret, at 689 feet high. Standing on a promontory, the mosque features glass floor that allows all visitors to look at the Atlantic Ocean while visiting it. What makes this structure really unique is its architecture, which features hand-made marble walls and retractable roof, as well. Having been completed in 1993, the Hassan II Mosque offers all visitors unique sights and opportunities, especially because its architecture is Arab-Andalusian, with a wonderful color scheme of green and ground brown. The mosque is especially beautiful to visit during spring and summer, when the ocean is calm and can be watched without potential dangers. 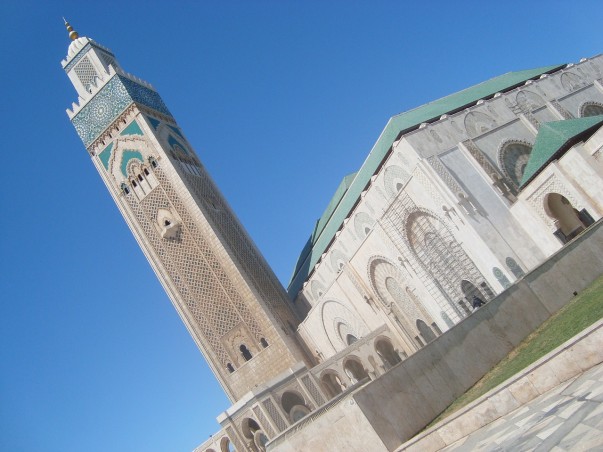 Even though it is ranked only as the third most beautiful mosque in the world, the Al-Aqsa Mosque stands out among other mosques in the world due to the fact that it is part of the “Sacred Noble Sanctuary,” also known as Al-Haram ash-Sharif, which is believed to be where the Temple of Jerusalem once stood. Initially built as a smaller prayer house, the Al-Aqsa Mosque was later rebuilt and expanded in 705 CE. The mosque has been constructed using precious materials, such as white marble, gold, limestone and stalactite, having an ancient appearance that lets the visitor wonder about its history. The mosque is opened to all visitors who come to Jerusalem, Palestine, and can be visited especially during various Muslim celebrations that take place throughout the year. 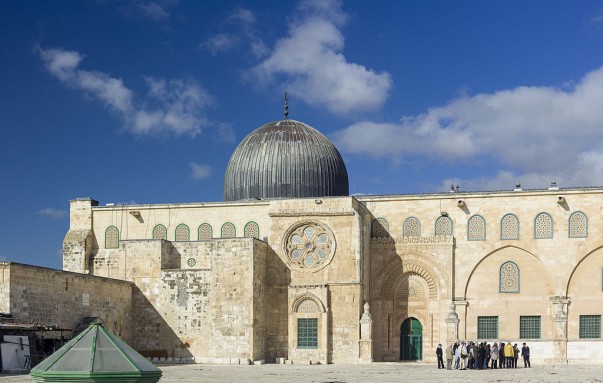 Shaped like a desert Bedouin's tent, the Faisal Mosque in Islamabad is the largest mosque in Pakistan, also recognized as world’s largest mosque during 1986-1993, until the expansion of the Masjid Al-Haram. With four corner minarets, the structure has a unique architecture, corresponding to the contemporary Islamic style. This mosque has been recently built in 1986, which makes it stand out among the others. Even though it lacks the traditional domes and arches, the structure is still very popular in Muslim culture, with a concrete shell and mosaic pattern on the west wall. All visitors are welcomed to the Faisal Mosque throughout the entire year, but they are advised to dress accordingly to enter it. 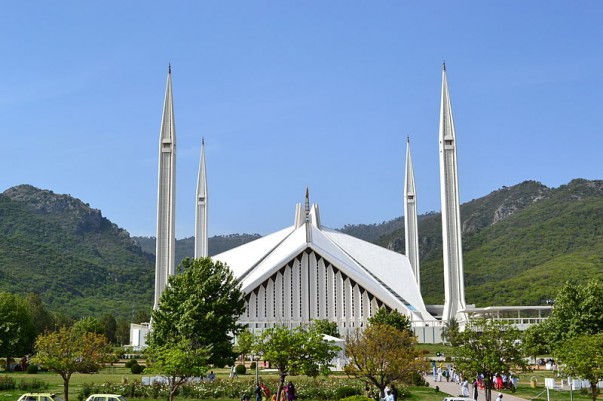 As a major landmark and tourist attraction of Brunei, the Sultan Omar Ali Saifuddin Mosque was completed in 1958, built according to the modern Islamic architecture. The mosque is extremely appreciated for its many lush gardens full of fountains, golden domes with courtyards and marble minarets, which will successfully compensate its small capacity. Moreover, the Sultan Omar Ali Saifuddin Mosque is surrounded by floral gardens and trees, which symbolize heaven in Islamic culture. The most notable feature of this mosque is its main dome, which is covered entirely in gold. For visitors who want to come to Brunei to visit this mosque, they will be certainly enchanted by the surreal views offered by the tallest minaret of the structure, which mixes both Renaissance and Italian architectural styles. 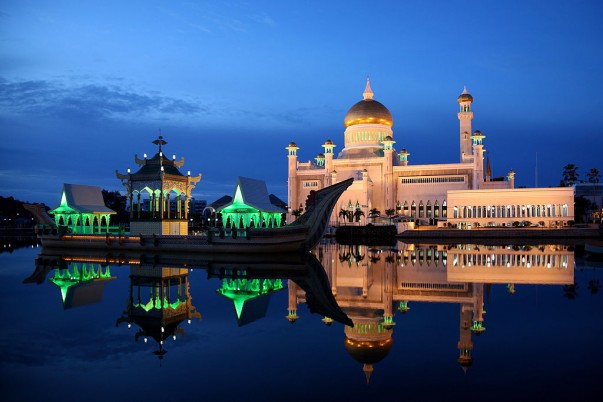 Located in Kedah, Malaysia, the Zahir mosque is recognized as one of the oldest and most famous structures of this type in Malaysia. Built by Tunku Mahmud in 1912, the Zahir mosque approaches a unique architectural style, which was inspired by the AZIZI Mosque in Sumatra, Indonesia. With five domes and several minarets, this place of worship is one of the most sacred in the whole Muslim world, particularly because the state’s Quran reading competition is held here annually. When attempting to visit the Zahir mosque, be sure that you come when this event is held, to enjoy a unique, one-of-a-kind experience. 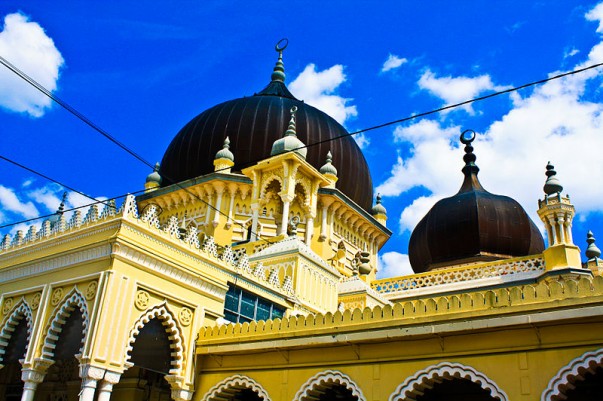 These Mosques are undoubtedly some of the most remarkable constructions in the world, having beautiful architectures and styles that make all of them so different, yet very similar.