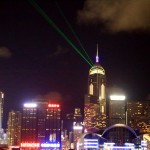 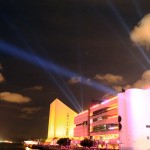 After spending my entire day at Tsim Sha Tsui Promenade and savoring Hong Kong’s splendid skyline and harbor views during the day time, it was time to enjoy the evening now. The city skyline was soaking itself into a dazzling array of lights and glow sign boards atop the buildings, transporting me into a spellbinding world of colorful lights against a dark blue sky. It was almost 7:45 PM when a crowd started gathering near the Avenue of stars walkway along the Harbourfront. We were just 15 minutes away from the razzle dazzle of lights and music show, which was just about to start.

As my watch struck 8 p.m., I could see a streak of the laser on the top of a tall building across the harbor. Before I could react to this, there was another beam and another, and so on, forming an interesting pattern of laser lights in the sky on different buildings. Streaks of lights started doing their tricks on tall sky scrapers on either side of the harbor, while music and narration started complementing the light show by adding more drama to this entire extravaganza. Termed as ‘World’s Largest Permanent Light and Sound Show’ by Guinness Book of World records, it is a testimony to Hong Kong’s vibrancy, energy, and cheerful spirit. Organized by Hong Kong Tourism Board, this Multimedia Extravaganza comprises of five themes: Awakening, Energy, Heritage, Partnership and finally Celebration for the finale. Large collection of Interactive Laser lights, Search Lights, LED displays, and light beams form an interesting light graffiti against a dark sky backdrop.

The best vantage points to enjoy this Spectacular Music and Light show includes, “Avenue of Stars” on the Tsim Sha Tsui waterfront, Golden Bauhinia Square waterfront walkway in Wan Chai district on Hong Kong Island or cruising on sightseeing ferries and traditional boats sailing across Victoria Harbor. You can also choose to opt for a cruise with dinner-on-board while enjoying this dazzling show. English narration is aired on Mondays, Wednesdays, and Fridays while on Tuesdays, Thursdays, and Saturdays, it is Mandarin and Cantonese on Sundays. A total of 44 skyscrapers and landmark buildings participate in this colorful extravaganza of dazzling lights and music on either side of the Victoria harbor front for 14 minutes at a stretch, making it most sought-after live show in the world. This show is held only when the weather is clear and there are no signs of rains or cloudy weather.

Experience this splendid show once and relish it forever…!