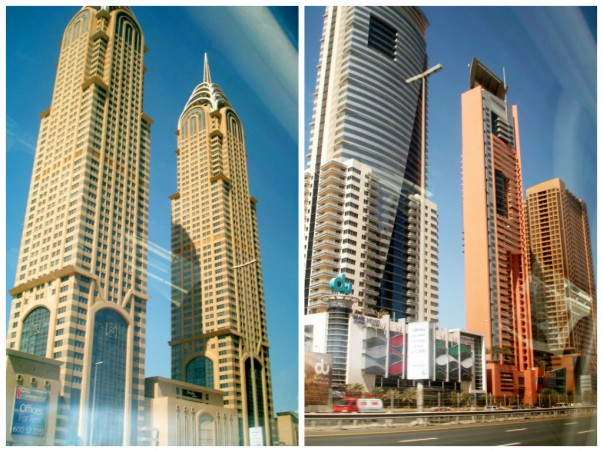 I imagined I was on a ramp, on both sides of which were standing tall, glitzy, and contemporary models in the form of skyscrapers that compete with each other to put together the best business show. Each building is unique in terms of design, architecture, and overall appearance. Together they form the impressive skyline of Dubai, which has drastically changed over the years. These were my thoughts as we were driving on Sheikh Zayed Road in Dubai’s Downtown area.

We were in fact gliding past by tall skyscrapers housing some of the world’s best known business establishments, hotels, restaurants, and apartments. Sheikh Zayed Road is a unique example of mixed land development. It’s even more fun if one rides Dubai metro’s Red line which runs alongside Sheikh Zayed Road on an elevated track. There are metro stations at every half a kilometer. Sheikh Zayed Road is a part of the E11 highway which is one of the longest roads in the entire Middle East connecting the Emirate of Abu Dhabi to the Emirate of Ras Al-Khaimah at the Oman border. This road runs almost parallel to Dubai’s long coast line and connects to some of the most important landmarks in Dubai.

Sheikh Zayed Road is an eight-lane road paved with beautifully landscaped pedestrian paths and interchanges for smooth inflow and outflow of traffic. In fact I took out my handycam and put it out through the sun-roof of our Land Cruiser to get a nice coverage of driving through this iconic road. It was good fun, though I wished to stop by the roadside to click some photographs of the various distinctive buildings, unfortunately I could not do so, due to road safety rules, and all I had were shots from inside the car.

Don’t just zoom past Sheikh Zayed Road, as this is not just a road, but a ramp full of architectural models standing along its sides ready to dazzle you by looking their spectacular best!