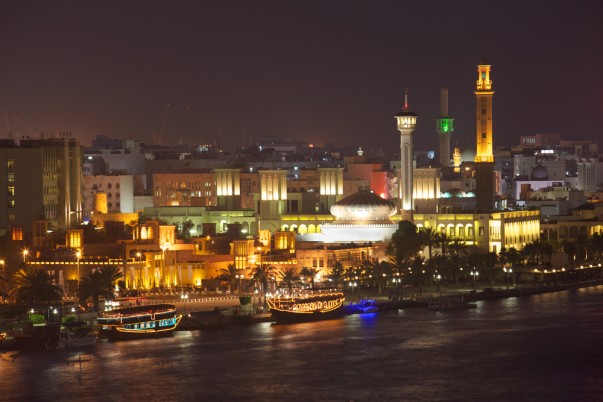 A night-time view of Dubai Creek or Khor Dubai.

Creek Dubai is a water inlet that runs through the center of Dubai and breaks it into two halves, on the west Bur Dubai and to the east Deira. The length of the Dubai creek is 14 km. There are now eight wharfages and each can cater to 31 ships. Only dhows or wooden vessels are allowed in the creek to retain the traditional flavor. Countries like Somalia, Yemen, India, Iraq, Iran and the Gulf States depend on Dubai creek for their trade with Dubai.

The creek helped Dubai achieve economic success in pearl trade and pearl fishing. Dubai creek helped Dubai become the center of trade with dhows and ships arriving here from the European coasts, the Indian subcontinent, Iran and the Gulf.

Earlier only smaller dhows could enter the creek. Bigger ships had to transfer goods in smaller boats to enter the creek. H.H Shaikh Rashid bin Saeed Ali Maktoum conducted a technical and an economic study to widen and deepen the creek in 1954. Dredging operations were carried on and Al Maktoum Bridge was built in 1964. In 1967 oil was discovered and in 1968 mobile part of Al Maktoum Bridge was built to help oil tanker movements.

You can cruise through the crystal blue waters of the creek in small boats made of wood known as abras. The abras work as water taxis in the creek. You can take abras from Deira to move to Bur Dubai side.

Creek in Dubai still has many dhows offering a traditional vista of the city. If you want to get the traditional flavor then tour the creek in a dhow, the traditional vessel made of wood or in a cabin cruiser. In this tour you can see most of the chief landmarks. You can go for cruises both in the daytime and at night.