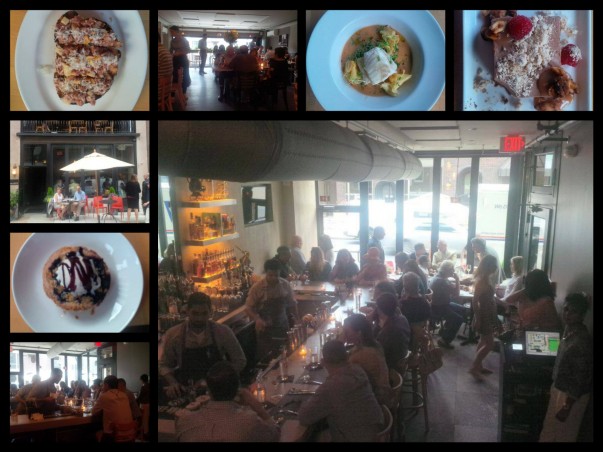 Vernick is wonderful. This is a place where they really know their food, and where everything they prepare is of the highest possible quality. This is food that’s creative, beautiful, complex and interesting. This is an expensive, serious restaurant tucked into a lovely little rowhouse in Western Philadelphia. It honestly doesn’t get much better than this. As a single, hopefully telling, example, if you want a nonalcoholic drink, they have a breathtaking list of options, many of which are custom-mixed by the bartender. For example, a Mint Fizz, which is a drink they created themselves. Yes, it’s really good. Amelia has three of them – ah, the wonders of being sixteen years old.

It’s a little complex to describe without a diagram, but essentially, there are three dining areas at Vernick. The ground floor has two (not including the sidewalk). One is the front room, which looks out on Walnut Street. The second is (of course) the back room, which is a windowless little grotto. The third is on the second floor, and that’s where we sat.

The third floor room is where we ate. It’s very spare and clean, with hardwood floors, simple Scandanavian-style tables and chairs, and an open window that runs the length of the front of the room. We sat next to this window, meaning that while dining inside, we also got the sun, and the breeze, and the passers-by on the sidewalk, from fifteen or so feet up. We were screened by a railing, and some plant boxes, but overall, it’s the perfect place for dinner, and especially nice as the sun goes down and the city goes from day to night.

One of Philadelphia’s all-time great musical groups was Daryl Hall and John Oates. I remember reading once that Daryl Hall was so tasteful that if he’d written Moby Dick, he would have made the whale off-white. Vernick is like that. The place is beautiful, elegant and restrained – kind of the Princess Grace of restaurants, which is kind of fitting, given that Her Royal Highness came from Philadelphia. Bet you didn’t know that, did you? Lively, gorgeous and understated.

Great. Really professional. Like REALLY professional. Amelia was my dinner date, and at 16, she didn’t know what some of the terms on the menu meant – ceviche, for example, or ragout, or confit. Our server, who was one of a team of about four and coincidentally, was named Emilia, was sincerely delighted to explain all this, and to teach my Amelia. As she pointed out, it’s her job to make sure we had a fantastic meal – that’s why she’s there. As another example of Vernick’s professionalism, the table was crumbed after every course, and not using one of those dopey metal things, but a simple folded napkin.

Very expensive. Because this was a birthday dinner, there was no holding back, and the meal came to over $200 for two, including tip.

The meal began with an amuse bouche of a very small cup of melon gazpacho, and a kind of cornbread cake. Very nice, and a great way to begin the meal. The gazpacho was more savory than you’d think and the cornbread was a sort of cornmeal madeline. Very nice.

As luck would have it, both of our appetizers were raw. I ordered the steak tartare, which was served on thick toasted sourdough bread, and dressed with onions, cheese, spices. This was a revelation – a deep, complex, intensely savory dish that was rich without being heavy, and incredibly delicious. It’s the kind of thing that causes people who are eating it to close their eyes – that good.

The other appetizer was day boat scallops (our server explained in amazing detail what “day boat” mean, specifically). These were raw also, and appeared beautifully sauced, dressed and spiced. Light, incredibly fresh, and really, really good.

For an entrée, Amelia ordered the steamed cod. This came with three handmade shrimp dumplings, and was sauced (or “brothed” perhaps) right at the table. The results was amazing – incredibly delicate, flavorful cod, in a Thai-inspired broth which was VERY salty, but worked wonders on both the fish and the dumplings (which featured, of course, homemade pasta). A terrific dish.

I had braised rabbit, with fingerling potatoes and sausage, served with Swiss chard. This was great – served in what looked like a broken-off cast iron saucepan, a nod, perhaps, to rabbit being game. The chard was an especially nice touch – I really like vegatables like chard, broccoli rabe, kale, spinach – and it set off the rabbit beautifully. Everything was perfectly done, and the sauce was a fantastic, rich and delicious counterpoint to everything, including the sausage.

Dessert lived up to the standard. I had basically a blueberry pie with ice cream, which was excellent – it was kind of a personal pie – the perfect size for one person, and obviously handmade by a pastry chef who knew what she was doing. I know she was a she because she served this dessert personally. Amelia had a small brownie, with caramel and spices, which was also incredible.

There was no sense of rush, no pressure to eat and leave, and we took our time and enjoyed ourselves as the place gradually filled up – we’d gotten an early start. We left, and walked down to Rittenhouse Square to buy some books. It was a wonderful meal – elegant, first-class and careful. Vernick Food & Drink is an outstanding addition to the downtown Philadelphia restaurant scene.

« Canadian Butter Tart Recipe Things to do in Incheon »