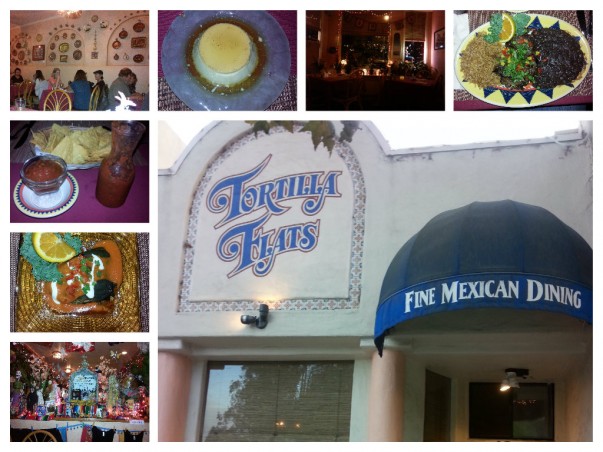 In Mexico, one of the big holidays is the Day of the Dead, or in Spanish, Dia de Muertos. It’s a three-day holiday during which people remember and pray for the deceased, and it’s celebrated with elaborate, amazing and more than a little creepy decorations and displays. Wikipedia has this to say:

Traditions connected with the holiday include building private altars called ofrendas, honoring the deceased using sugar skulls, marigolds, and the favorite foods and beverages of the departed, and visiting graves with these as gifts. They also leave possessions of the deceased. … Some families build altars or small shrines in their homes; these sometimes feature Christian cross, statues or pictures of the Blessed Virgin Mary, pictures of deceased relatives and other persons, scores of candles and an ofrenda. Traditionally, families spend some time around the altar, praying and telling anecdotes about the deceased.

Tortilla Flats (presumably named after the John Steinbeck novel set in Salinas, which is down the road) is full of Dia de Muertos stuff. There’s a full-on altar, all kinds of other decorations on the wall, and lots of skulls and Christian knickknacks everywhere. This is because we went in October, which is when the holiday falls, but it also indicates that this is not some kind of burrito joint. It’s a real, serious Mexican restaurant, run by people who cherish their heritage and culture. And, despite all the imagery, the place is cozy and friendly, the food is great, and the entire restaurant, albeit dark and a little cavelike, is great. Incidentally, Tortilla Flats has been repeatedly selected as the best Mexican place in the Santa Cruz area. It’s that good.

In the middle of Soquel Village, at the intersection of Soquel Drive and the old road to San Jose. There’s a nice, big parking lot right behind it, so it’s easy to park and get there.

Dark, and packed with decorations. Mexican ceramics cover the walls, and the place is decorated like the inside of an adobe. Brightly-colored, cheerful plates, flowers and the constant hum of a busy, popular, local place.

Very good. Friendly, efficient waitstaff who thoroughly know their menu and know the owner. Our waitress, in fact, helped us size and pick out a Dia de Muertos tank top for a sixteen year-old by obligingly modeling it.

Not cheap -- $110 for two, before tip, including two drinks and one dessert.

Top-shelf, expert Mexican food, done by someone who is both steeped in the culture, and running a real restaurant – traditional dishes adapted for a service environment.

To begin with, we had the usual chips and salsa. Everything was fine, and one really nice touch was that the salsa arrived in a small carafe, and you poured it into the little dipping jar. That was really handy, because with more than one person, you always, always, always run out of salsa in Mexican places, and then have to flag down a server and wait for more. This solved the problem.

The meal itself began with an interesting appetizer. Poblano Relleno is a roasted Poblano pepper filled with goat cheese and choizo and green onion. Essentially it’s a very small, flat roasted pepper, seasoned and filled with a cheese/onion and choizo. The flavor is smoky, and intense and deep, like a lot of Mexican food, but also surprisingly complex and subtle. It was really good, and very unlike a lot of the usual fried or nacho-based stuff typical of Mexican places.

The first entrée was Rio Grande Carne Asada. This is marinated, thinly sliced and grilled skirt steak. It was served with mashed black beans and rice, both expertly done. The dish does not contain a whole lot of steak. It’s carefully done, and tastes great – earthy, strong and very Mexican – but it’s not a lot of food.

The other entrée was that staple of Mexican meals, the quesadilla -- a green chile stuffed with jack and cheddar cheeses, wrapped in a flour tortilla & covered with enchilada sauce and melted cheese. Topped with sour cream and guacamole, and served, as was the Carne Asada, with beans and rice. Really good also.

The menu in general is heavy on basic Cal-Mex dishes – burritos, quesadillas, enchiladas. There’s nothing super-creative here, but everything is done really, really well, and lacks any hint of the greasy, starchy cholesterol-bomb that Mexican food can often be. This held true all the way through dessert, which was a classic Mexican flan – of course. Flan is the world’s simplest custard – sugar, eggs, milk and vanilla, served with a caramel sauce that’s made when you bake the flan, and that flows over it when you finish it and flip it over.

All in all, a really nice, cozy little Mexican place with great food, good service, and a real, welcoming, warm personality.