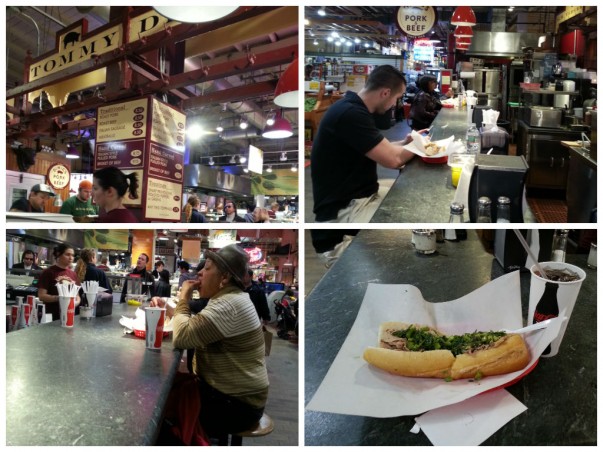 Review of Tommy DiNic’s at the Reading Terminal, Philadelphia

This is going to be an unusual review. Usually, I talk about a lot of different dishes, and provide a lot of information. This time, I’m going to be discussing exactly one thing. It’s all I’ve ever eaten at DiNic’s. It’s all I will ever eat. It’s all anyone should ever eat.

But I’m getting ahead of myself. First, I need to talk about Philadelphia. Philly was my home for over a decade, and a city I loved very much, in a love/hate kind of way. One of the things I loved most about it was that it was, is, and always will be a blue-collar town. Once up on a time – like, for about a century – Philadelphia was known as the “Workshop of the World.” This was not a place you went for theatre, or high society. It was a place you went to build things, make things.

Philadelphia made steel, hats, irons, televisions, railroad cars, buses, rugs and textiles. You name it, they manufactured it. That’s all gone now – North Philadelphia, where all of this happened, is now the worst, most evil ghetto you can imagine, but back in the day, it was factories, plants and workshops. Philly also had shipyards, a big port, a massive rail terminus and coal from the anthracite mines of Pennsylvania. It was a working town.

Consequently, a lot of Philadelphia’s culinary history reflects that working-class heritage. Simple, solid food, informed by waves of Irish, black and especially Italian immigrants who built up neighborhoods, and brought their traditions with them. This wasn’t complex, fancy food. This was straightforward, nourishing food that was eaten fast and without pretense. DiNic’s is part of that tradition, and that’s what makes it great.

I’m going to write about one thing. DiNic’s offers several different sandwiches, but this is the only one that counts. All the rest are decoration. This is the roast pork sandwich. It comes in a roll, and should be ordered with sharp provolone cheese and broccoli rabe. For the uninitiated, broccoli rabe is also known as “rabini”. It’s slightly bitter, and a staple of Italian cuisine.

It is incredible. I mean, absolutely amazing. To understand how and why, obviously, the best approach is to eat one. Failing that, however, a little history lesson is in order. DiNic’s was founded around a century ago by Gaetano Nicolosi, whose family was one of thousands who moved to South Philadelphia to find a new, better life. They opened a butcher shop, which became a restaurant, out of which they eventually sold roast pork sandwiches. The family lived over the store, and raised five sons.

These are the simplest possible meals. Enormous pork roasts are slow-cooked in ovens. The broccoli rabe is as fresh as you can imagine—after all, the DiNic’s is in the middle of a produce market. The provolone is the best available. The rolls are, too – from one of the many Italian bakeries in Philadelphia. A guy with an apron and a T-shirt with a pig on it carves slices, assembles the sandwich, and a waitress who is busy and doesn’t have much to say anyway puts it in front of you.

The result is a big, hearty sandwich that’s had almost a century of road-testing. This is what has fed millworkers, cops, lawyers, factory workers – anyone who’s hungry takes a seat, gets a sandwich in seconds, and digs in. Crunchy rolls, with sharp, rich provolone, unbelievably rich, hot and savory slices of pork roast, accented by the slightly bitter greens of broccoli rabe.

This has been voted the best sandwich in the United States for a reason. They offer other stuff, but that’s sort of like going to the Vatican to enjoy the night life. If you’re in Philly and you’re hungry, go to DiNic’s and order this.

Crowded, noisy, bustling. You sit at a counter, assuming there’s a space. If there isn’t, you can line up to get something to go, or you can wait for a space. At lunchtime, you may wait a while.

Efficient, brusque, and a little rude. Whoever is working the counter isn’t interested in your comfort, pleasant dining experience or anything else. They want to get you your food, get you fed and get you out of there.

DiNic’s is right in the middle of the Reading Terminal Market. This massive structure used to be the Reading Railroad terminus in Philadelphia, and has now been converted into an enormous produce market. If you like markets, this is one of the world’s greatest – everything from Pennsylvania Dutch stalls selling scrapple, coffee merchants, fishmongers, soul food, fish, produce. It’s all there. It’s a lively, crowded, chaotic scene with an eclectic clientele – shoppers include everything from people on their lunch break from the Philadelphia Muncipal Court next door to neighborhood types to soccer moms coming in from the suburbs to wide-eyed tourists. It’s wonderful. As far as parking, you’re right in the middle of downtown Philly. Don’t drive in unless you have to. If you must, then find a garage. Be warned, however – the Philadelphia Parking Authority is absolutely ruthless.

Calling is kind of pointless, however. What are you going to ask them?

Nothing is more than ten bucks.

« Things to do in Recife, Brazil Melbourne Street Art - World full of Artistic expressions »
One Comment