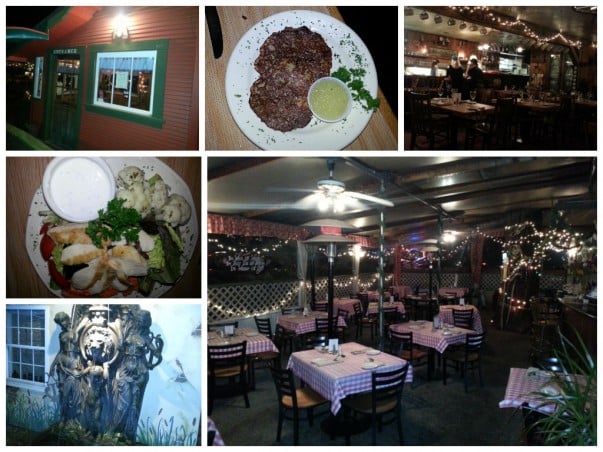 Review of The Tyrolean Inn at Ben Lomond, California

This place is fantastic. No beating around the bush – it is just plain great. I never really had any idea what German food was, or could be, so maybe I’m overexcited because this is something entirely new for me, but I really loved this place. I’m kind of embarrassed that I was so ignorant of this cuisine, but I plan to make it up as fast as I can.

Ben Lomond is a blip. You drive north up Highway 9, which snakes through dark and spooky redwood forests. There’s nothing, then more nothing, then suddenly you’re in this little hamlet – Ben Lomond, population 6,200. And, amazingly, for a town this dinky, there are two first-class restaurants in operation. One is La Casa Nostra, which is a great Italian place. The other is the Tyrolean Inn.

The Tyrolean Inn has been in operation for forty or so years, and looks every inch of it. It hasn’t changed in decades, and has every indicia of being a complete dud. Little tourist cottages. Kitsch everywhere – beer mugs hanging on the paneled walls, carpeting, old German Olympic posters, every single cheesy German thing you’ve been mocking for your entire life. All the dopey stereotypes about Germany roar to life – oom-pah bands, lederhosen, little girls in dirndls feeding posies to their pet goats, Augustus Gloop, all of it.

The Tyrolean Inn is on the north part of Ben Lomond, on the edge of town, on the right (east) side of Route 9 heading north. It’s a little compound of cottages. The parking is a little iffy, so be prepared to hunt around for a spot. However, you’re in the middle of nowhere, so it’s free. Boy, is it free.

Super-homey and kind of funky. There’s a really nice big beer garden out front, all kinds of little decorations everywhere, wood paneling, carpeting. It looks like a tourist lodge, which I guess it kind of is. Fireplace. You get the idea.

Really good, personal and amateur. These people have worked here for years, know everything and are happy to share their recommendations. Informal, and nice.

Very reasonable -- $83 for two, including two beers each and a split dessert. The portions are enormous. Not that that stopped us.

Where to even begin? This is German food, so this is all about meat, and potatoes. There is nothing fussy or tricky here, and you’d better like sausages. Liking beer helps, too.

We started with a sausage salad. This was, in German, called Würstelgrösti and consists of Polish, Bockwurst, & Nürnberger sausage sampler, sliced & sautéed with onions, tomatoes, & bell peppers. It was fantastic and exactly as described. Chunks of sausages, quickly sautéed together with onions, tomatoes and so on. Hearty, tasty, good.

The other appetizer was Heißes Bauernschmankerl - toasted farmers’ bread with garlic, bacon, tomato and mozzarella cheese. Think of a German version of an Italian brushchetta. This was delicious also, and much friendlier, or less tricky, than the Italian version – good rye bread with bacon and cheese and garlic. And, by the way, a lot of it – six hearty slices. If you’re weak or small, this alone would be a meal. Fortunately, neither I nor Beth are either, so we plunged bravely on.

My entrée was sort of a meat festival -- Tyrolean Schmeckerplatte. This was one slice of smoked pork loin, 1 Cordon Bleu, 1 Bockwurst, 1 slice saurbraten, with spatzle, saurkraut and red cabbage. It was absolutely wonderful – basically, two sausages and a slice of smoked pork, along with sauerkraut and cabbage. The sauerkraut was an example of what I’m trying to describe here. Typical American sauerkraut, which I like just fine, has a vinegary, acid taste. This stuff was much richer and milder, almost creamy, and just good. The sausages, of course, were great and the smoked pork was perfect. The whole thing was served with genuine German mustard, which, like the sauerkraut, is something completely different – much milder, creamier, and delicious also.

The other entrée was Salatschüssel mit Hühnerstreifen --- a large mixed salad topped with strips of chicken. However, this is not like any chicken salad you’ve ever had. Ingredients included shredded carrots in a sweet sauce, tomatoes, pickled cauliflower, along with the usual lettuce and chicken. The cauliflower itself was kind of a miracle – picked in some kind of brine – crunchy, delicious, and unlike any cauliflower I’ve ever had. And, of course, a side order of potato pancakes with applesauce – heaven.

Dessert – ah, dessert. We had Nußcrepes ~ Chocolate-hazelnut crepes in apricot-brandy sauce. Incredibly rich and good, and a wonderful combination of apricot and chocolate, which gave the whole thing a fruity taste.

Finally, of course, the beer. They have about two dozen German beers here, none of which you’ll find at your local grocery store. I would recommend doing as I did, and just letting the server bring whatever they recommend.

The Tyrolean Inn is not a place for picky eaters, or gustatory versions of Little Lord Fauntleroy. This is the cuisine of the people who basically conquered Europe a few times. There’s a lot of food, a lot of meat and vegetables. But if you have or can acquire a serious appetite, this place is fantastic. It’s warm and cozy, the beer is world-class, the food is great and it’s someplace you can go and really be in a different, wonderful world.