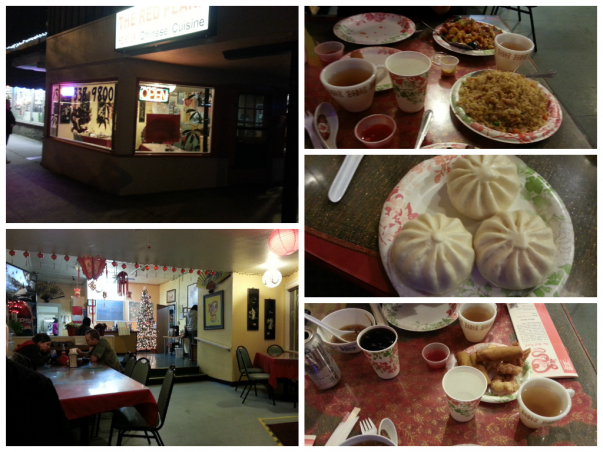 The Red Pearl is a dump. For ambience, it is easily the worst place I’ve reviewed in the Santa Cruz area. It’s cold, not especially clean, and decorated like an exceptionally cheap Chinese restaurant, which it is. The primary feature of the place is a large-screen television showing ridiculous Hong Kong action flicks. However – and this is a huge “however” it also serves really good Chinese food at rock-bottom prices, and is run by what may be the nicest, most attentive and friendliest restaurant person I’ve ever met, Jenny. If you’re in “Bouldy” it’s a great idea, and it may be worth a special trip to experience for yourself.

Boulder Creek itself is one of my favorite towns in the region. It’s basically a one-street logging town that’s also the gateway to Big Basin, the oldest park in the California state system. It’s got a grocery store, a couple of taverns, and the usual assortment of hardware stores, feed stores, and other assorted places that a small, rural town like this can support. Nothing fancy – I grew up in a place like this.

It’s also an incredibly down-to-earth place, which is why I love it. Again, I grew up in a place like this, and Boulder Creek is not where you’ll find artisanal olive oil, pretentious cuisine, or game-playing. People here eat out expecting to get fed, and not expecting to find castles made out of their chow, and the Red Pearl delivers.

Another thing about small towns (and the media always gets this wrong) is that they’re genuine communities. Everyone knows everyone, and even the town drunk or the town lunatic has a place somewhere within the social system that glues it all together. The Red Pearl was no exception – it’s the town Chinese place, and it seemed like everyone who walked through the door knew Jennny, asked her how she was doing, and so on. It was nice.

Absolutely classic cheap Chinese restaurant vibe. Only five tables. In a building that was originally constructed as a hotel in the nineteenth century, a television going. Paper plates and cups. Plastic forks. You order at a counter and pay first, then your food is brought. A scuffed linoleum floor. Glass-topped tables that are just slightly sticky. Chinese stuff all over the walls, and Chinese paper lanterns. This is every cheap Chinese place you’ve ever been in rolled into one.

Incredible. This is a two-person restaurant, and Jenny runs the “front of the house”, such as it is. She could not have been warmer or friendlier or more considerate. She asked our names, and shook our hands. She thanked us for coming. She kept bringing us additional food, extra soup, everything. Since she was closing in an hour, when we asked to have our food boxed to go (for lunch later) she gave us extra. She was incredible – just amazing.

Dirt-cheap. $40 for an enormous amount of food for two people, not including drinks (no liquor license) and dessert (no dessert).

It’s kind of pointless here to go through specifically what we ordered, and what we ate. We selected one of the family dinner specials, which included hot and sour soup, crab Rangoon, deep-fried prawns, chicken fried rice, Kung Pao Chicken, beef broccoli, as well as some steamed pork buns that Jenny gave us just because. This was an immense amount of food.

And it was really, really good. As I said, with the exception of the tea, everything showed up on paper plates, and was eaten with plastic utensils. But it had none of the greasy or sugary taste most low-end food like this has. The hot and sour soup was exactly as described – yes, hot and sour, and obviously fresh. The appetizers were crisp, the pork buns had just the right combination of sweetness and stickiness, the beef broccoli was excellent, and on and on.

The Red Pearl is not a gourmet place. It’s the opposite. It’s cheap, fast Chinese food for people who are not planning to linger over their meal and swoon over the perfect texture and depth of the demi-glace they’re about to experience. What it is is excellent food, served by seriously friendly people, at really low prices.

« Discover New York in 7 Pictures Toronto Public Transportation - How to Travel in Toronto! »
One Comment