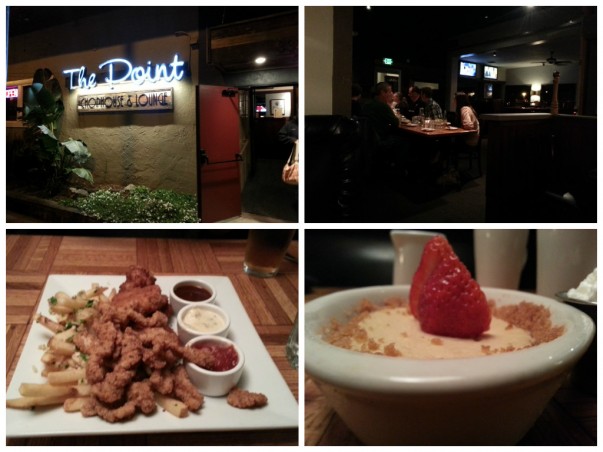 There are steak places in every major American city where the whole point seems to be excess. The steaks are wonderful, but they’re incredibly expensive. The side dishes are all unbelievably rich, as are the desserts. If you order a drink – a real drink – before dinner, it will put you into an alcoholic coma. And the bill, when it arrives, will be enough to make your eyes water. I’m thinking here of places like Ruth’s Chris, or Peter Luger in Brooklyn, or the Harris’s place in San Francisco.

The Point Chophouse, in the Pleasure Point section of Santa Cruz, is a watered-down local version of that. While you won’t get served a steak that weighs two pounds (Peter Luger really does this) you will get a big, perfectly done steak with a delicious, equally unhealthy array of side dishes. The Chop House is a comfortable, reasonable, nice place to get a good dinner if what you want is … meat.

The Chop House is on Portola Drive, about ten minutes south of the City of Santa Cruz. It’s got its own parking lot, so parking is easy, and the sign is neon and bright, so it’s hard to miss. However, the drive there is along a fairly twisty stop-and-start road, so it’s a good idea to both drive carefully, and to be careful with what you drink.

Nice, but not expensive or swanky. The Chophouse used to be a different restaurant, a place called the Portola House. Although it was extensively redecorated, it’s still a little – just slightly – downmarket-looking inside. It’s also located right next to – as in, part of – a trailer park. All of this fits the slightly gritty, slightly unglamorous nature of Pleasure Point, which has world-class surfing, but a few too many burrito joints and cheap motels. All in all, however, it’s really comfortable, nice and attractive. It’s just not elegant.

Great. This may have been because the place was mostly empty, it being the off season, but the service was fast, expert and cheerful, and our server was wonderful.

Pretty expensive. $98 for two, including drinks and dessert. The portions are adequate, but not enormous.

The food is terrific, but it is not healthy. Everything is either red meat or deep-fried if it possibly can be. Because of this, of course, it’s delicious, but you are unquestionably going to consume far more than your share of fat, butter, and so on.

For the uninitiated, garlic fries are a local Bay Area specialty, and basically consist of French fries heavily seasoned in finely chopped garlic, along with salt and parsley. Just over the hills from Santa Cruz is the town of Gilroy, which bills itself as the garlic-growing capital of the world, so the garlic was absolutely fresh. They serve garlic fries, for example, at San Francisco Giants games. Garlic fries are wonderful, but don’t plan on kissing anyone you care about for several hours.

The other appetizer was a simple garden salad, which was lovely. Fresh produce, not too much dressing, and enough to be an appetizer without being overwhelming.

One dinner was a brandy-peppercorn steak, served with broccolini and duchess potatoes. These terms don’t really do these dishes justice, so a little more description.

The steak was perfectly done, and served with a sauce heavily larded with crushed peppercorns and brandy. I love this stuff. It gives the sauce a great bite and aftertaste, and is a really nice complement to the steak itself. It was wonderful. Broccolini is a bitter herb that’s sort of a cousin of broccoli. Great also. Duchess potatoes are a fancy term for what my mother used to call twice-baked potatoes. To make these, as their name implies you bake a potato, then let it cool, remove the potato material from the inside while preserving the skin. You then add things like butter, eggs, cheese and bacon to the material then return it to the shell, and bake it again. The result is unbelievably rich and good, and has about a trillion calories.

The other entrée was skirt steak. Interestingly, my mother used to make this, too, primarily because it was cheap. Not anymore. She also made what she called veal shanks, for the same reason. Those are now called ossobucco, and also now cost the earth. Oh, well. Anyway, a skirt steak is a thin, rather tough cut of beef that is usually marinated, sometimes for days, before being grilled and thinly sliced. The marinade tenderizes it, and gives it a wonderful, rich flavor, which is exactly what was delivered to our table at the Chophouse. This was also served with broccolini and perfect rice pilaf rather than duchess potatoes.

Dessert was a Key Lime pie, which was baked in a ramekin rather than sliced from a bigger pie. It was great – not too rich, and light – although, to provide some more trivia, just as what’s described as “wasabi” is almost never actually wasabi root, Key Lime pies almost never use real Key Limes, which are rare outside of California and Florida.

The Point Chophouse is definitely a neighborhood place. The food is great, the setting is relaxed, and they really know how to do a steak. Just be prepared to fully, completely and devastatingly blow your diet.