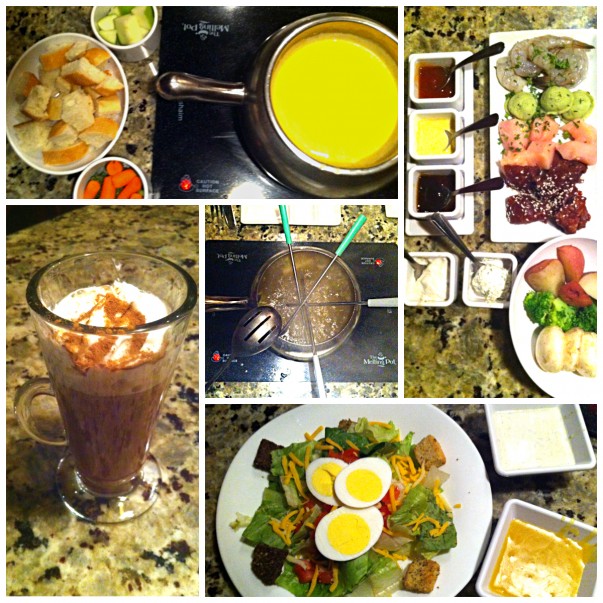 Why go to the Melting Pot? Because it’s fon to due! When life calls for a celebration, it’s time to head somewhere a little bit special for a nice evening out. One of those places might just be The Melting Pot. With many locations, The Melting Pot is an upscale restaurant that’s more than just a place to grab a bite. It’s an interactive dining experience, where your meals are made by you. Fondue, hot pot, delicious desserts – the multi-course meals at the Melting Pot are tasty and a fun way to celebrate birthdays, romantic anniversaries, and other special occasions.

A special note: There are many deals and coupons available for this restaurant, which makes it a much better value. It also means that the restaurant can get very busy, especially around the end of the month when deals are expiring. Be sure to call ahead or use OpenTable to make your reservations ahead of time.

The San Mateo location of The Melting Pot is rather strange – it’s set inside the CalTrain Station in downtown San Mateo. That means you’ll hear the train pass by every so often during your meal, which is off-putting at first. There are metered parking spots all around downtown and a large parking garage very close. Both of those options are free after 6pm.

The restaurant is dimly lit with upscale décor, and has a somewhat fancy and romantic atmosphere. The walls of the booths are tall, making the seating intimate and fairly secluded. It gets really hot inside thanks to the burners and steam coming from the table. Though the restaurant is located at a train station, this is really not evident from inside (except for the sound of the train a couple times every hour), because of the heavy curtains covering the windows and doors. There seemed to be plenty of seating in several large dining areas, including stairs leading to more seating upstairs, and an outdoor seating area as well.

We arrived for our reservation about 10 minutes early. They take their reservations very seriously at this restaurant, and were not seating anyone without reservations, even at the bar at that time, because it was full. Though we were the only people in the waiting area when we arrived, we were told we had to wait until our reservation time to be seated. We waited. We kept waiting. More people came in and the hostess talked to them as our reservation time came and went. About 10 minutes later, we were finally seated. Our server arrived a few minutes later, but while we were still deciding, she disappeared for quite a while. She must have had a lot of other tables, because we hardly saw her, while the neighboring table’s server stopped by their table every few minutes. We also overheard him giving thorough explanations and good suggestions for pairings, which would have been nice while we were choosing. Our server was friendly and talkative, but incredibly slow and not very available. Don’t come here if you’re in a hurry; it's the kind of place where you can expect a leisurely meal that can take 2 hours.

The Melting Pot is fairly expensive, especially if you’re planning on having a few drinks. There’s an extensive wine list with most bottles ranging upwards from $40 even surpassing $100. Cocktails run about $10, but there are Happy Hour specials for drinks and even for fondue at the bar. Regular price for the cheese fondue is about $10 per person, while entrees are about $20-$35 per person. Dessert fondues are around $9 each. Expect to spend at least $100 and potentially double that on dinner for two.

Dining at The Melting Pot might be more about the experience than the food, but that doesn’t mean the food isn’t tasty. We ordered a three-course meal with salad, cheese fondue, and entrees along with some wine and after dinner drinks.

The first course was the cheese fondue, and we chose the cheddar, which was a mixture of cheddar, Emmanthaler Swiss, along with beer, garlic, and mustard powder. Our server mixed these together straight into the cooking bowl on our table, and we enjoyed the cheese by dipping our skewers of rosemary sourdough bread, carrots, broccoli, and celery right into it. The flavors of the Swiss and beer really came through and made the dip more interesting.

I had the house salad, and the server offered to let me sample both dressings for it: the tangy house dressing and the peppercorn ranch, both tasty, but the ranch went better with the salad. We also tried the Caesar, which became interesting when topped with the Parmesan pine nuts.

For the entrees, we chose from a list of four broths (or “cooking styles”) to cook our food in. The basic seasoned vegetable broth comes with the entrée, but you can pay a few dollars extra for a Coq au Vin, the Caribbean influenced Mojo, or the Bourguignonne. We went with the basic to be sure our mix of entrees would all go well in the seasoning, and it was good but a bit salty. Our meal came with four entrees: teriyaki beef, which came with a delicious teriyaki glaze, chicken with its own mild curry sauce, and shrimp with ginger plum sauce. We also enjoyed some spinach and artichoke ravioli which really picked up the flavor of the broth. On the side came a bowl of vegetables, including potatoes, broccoli, and mushrooms. There were sauces for the vegetables too: gorgonzola port and Green Goddess (which was really great). The food and the sauces all paired wonderfully together. The process of cooking the food was fun and kept us on our toes, forcing us to slow down and really enjoy every bite. The menu also features a long list of interesting dessert drinks, which are not often found. I settled on the Café International, which was like an alcoholic mocha and so good. We were too full for the dessert menu, but it looks like it’s worth its own visit to The Melting Pot.